James Donald Cameron (May 14, 1833 – August 30, 1918) was an American politician from Pennsylvania who served as Secretary of War under President Ulysses S. Grant and in the United States Senate for nearly twenty years. In May, 1876 Cameron was part of a Cabinet realignment by President Grant, having been appointed after a brief tenure by Secretary Alphonso Taft, whom Grant appointed U.S. Attorney General. Former Secretary William W. Belknap had resigned from office, was impeached by the House for taking profit money from the Fort Sill tradership, put on trial in the Senate and acquitted. Secretary Cameron was one of two father-son combinations that served as Secretary of War. Secretary Simon Cameron was Cameron's father who served under President Abraham Lincoln.[1] The other father-son combination was Secretary Alphonso Taft and his son Secretary William Howard Taft.[1] During Cameron's tenure the U.S. Military was challenged by the Great Sioux War and by the threat of a second Southern secession after the controversial election of President Rutherford B. Hayes that ended Reconstruction. Cameron proved to be an energetic administrator and his appointment as Secretary of War launched his lengthy political career in the Senate.

Cameron was raised and educated near Harrisburg, Pennsylvania. After graduating from Princeton College, Cameron worked in the banking and railroad industries. In May 1876, Cameron was appointed Secretary of War by President Ulysses S. Grant serving until March 1877. After leaving the Grant Cabinet, Cameron served as Pennsylvania's U.S. Senator from 1877 to 1897, having served as chairman on two powerful Senate committees. In 1890, Senator Cameron supported the Federal Elections Bill that enforced African American voting rights in the South. After leaving the Senate, Cameron worked in various industrial businesses until his death in 1918. Cameron was the last surviving cabinet member of the Grant Administration.

James Donald Cameron was born on May 14, 1833 in Middletown, Pennsylvania in the family home, the first-born son of Simon Cameron, the 26th Secretary of War under President Abraham Lincoln and a powerful Pennsylvania politician. Cameron's mother was Margaret Brua. Cameron was commonly referred to as "Don". Having received his elementary education in Harrisburg, Cameron enrolled in Princeton College (today Princeton University); he graduated with a bachelor of arts in 1852 and received a master of arts degree in 1855.[2]

After leaving Princeton, Cameron's father Simon placed Cameron as a clerk at the successful Middleton Bank; whose main investments were in the iron, coal, and lumber businesses of Pennsylvania.[2] Cameron worked his way up to being Cashier and then President of the bank. As an executive of the Northern Central Railway during the American Civil War, Cameron managed the flow of supplies and soldiers from the northeastern states to Washington, D.C. and Virginia, including efforts to keep the railroad open despite Confederate attempt to damage or destroy it. From 1866 to December 1874 Cameron was President of the Northern Central.[2] As bank President, Cameron was able to improve the financial condition of the railroad. After leaving the Railroad, Cameron worked in various industrial enterprises in Pennsylvania.[2] 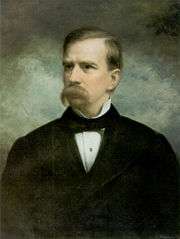 In 1876, President Ulysses S. Grant appointed Cameron to his cabinet as Secretary of War, a post his father once served in during the Lincoln administration, to succeed Alphonso Taft, who became Attorney General, and served as so until the end of Grant's presidency. Cameron's predecessor, Alphonso Taft, had initially replaced William W. Belknap, who had abruptly resigned over taking profit payments from the Fort Sill tradership. The Secretary of War had been given control over all Indian traderships in 1870. Belknap was impeached by the House, and during the summer of 1876 was tried and acquitted by the Senate. Cameron's appointment as Secretary of War was part of a sensational three move realignment by President Grant.[2] U.S. Attorney General Edwards Pierrepont was appointed Minister to England; Secretary Taft was appointed U.S. Attorney General; and Cameron was appointed Secretary of War, on the advice of his father, Senator Simon Cameron.[2] Cameron had never served political office until appointed Secretary of War.[2] Cameron had to quickly acquaint himself with the War Department that was in the midst of fighting the Great Sioux War. After the controversial 1876 Presidential election, Cameron had to contend with the Southern States who threatened to secede from the United States a second time. According to General of the Army William T. Sherman, the U.S. military during 1876 was as active as it had been since the Civil War.

The U.S. Military, including the Army, headed by Cameron, and Navy, headed by Secretary George M. Robeson, were also in a technological transition developing submarine technology; and torpedo mines and ships to protect United States' waterways and harbors.

The Battle of the Little Big HornRussell 1903

Without ever holding political office, Secretary of War Cameron had to immediately contend with the Great Sioux War and quickly become acquainted with the bureaucracy of the War Department. When gold was discovered in the Black Hills, miners began to invade Indian territory given by the Federal government to the Sioux tribe under the Fort Laramie Treaty of 1868. In addition, the federal government planned to put a route of the Northern Pacific Railroad through the Sioux and Cheyenne buffalo hunting grounds.[4] After negotiation for the sale of Sioux land failed in May 1875, President Grant ordered all non-treaty bands to return to the reservation.[5] When Sitting Bull and Crazy Horse refused to comply, Secretary of Interior Zachariah Chandler handed over the jurisdiction of the hostile Indians to the War Department on January 31, 1876 launching the Great Sioux War.[6] Three battles took place during the summer of 1876 while Cameron was in charge of the War Department; including the Battle of Rosebud, the Battle of the Little Big Horn, and the Battle of Slim Buttes. By October 1876, the War Department, under Secretary Cameron, increased troop levels at Western Indian Agencies to crackdown on Indian resistance. This was to prevent another massacre that had taken the lives of Colonel George Armstrong Custer and the 7th Cavalry at the Battle of the Little Bighorn. After all hostile Indians were rounded up a new treaty was signed that ceded the Black Hills to the federal government.

After the controversial Presidential election of 1876 the majority of electoral votes for Republican candidate Rutherford B. Hayes and Democratic candidate Samuel J. Tilden were disputed in the Reconstructed states of Louisiana and Florida.[7] Secretary of War Cameron allowed military troops stationed in both contested states to be at the disposal of Republican politicians.[7] Previously in June, 1876 at the Republican National convention Secretary Cameron was instrumental in nominating Hayes as the Republican candidate.[7] According to a report by General of the Army William T. Sherman, Southern States threatened to succeed from the Union if Tilden was not elected.[8] President Ulysses S. Grant responded through the War Department by having troops concentrated in Louisiana under Brigadier General Christopher C. Augur and reinforced in North Carolina under Brigadier General Thomas H. Ruger.[8] These stationed troops and the delicate and prudent actions of both generals, Augur and Ruger, to keep peace, prevented a second Civil War.[8] A Presidential commission set up by Congress and President Grant in 1877 finally chose Hayes to be elected President of the United States.[9] Cameron's father, Senator Simon Cameron, and other Republican politicians lobbied President Hayes that Cameron remain Secretary of War, however President Hayes refused, not wanting to be part of any Cameron political dynasty and having desired to nominate his own Cabinet.[7] 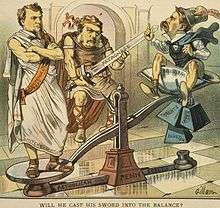 Will he cast his sword into the balance?An 1882 Puck cartoon depicts Cameron and fellow Pennsylvania senator John I. Mitchell on the Republican Pennsylvania Scale. Cameron, sitting on a platform marked "bossism", attempts to weigh himself down with weights marked "threats", "tricks" and "bluster" while Mitchell, dressed as a Roman, stands at the opposite end as an "Independent Republican". President Chester A. Arthur, too dressed as a Roman, holds a sword marked "patronage" which Cameron asks for to even out the balance.

Cameron was an active politician who, with the initial aid of his father Simon Cameron, and his political ally Matthew Quay, set up a political machine in the Pennsylvania legislature that ensured Cameron would be reelected to office.[10] Senator Cameron rarely gave speeches, and he was viewed as being judicious, unemotional, and reticent.[11] Cameron disapproved of the popular artful oratory methods used by his contemporaries while his own speeches were forceful and direct.[11] Adopting his father's method, Cameron's strength as a politician relied on working inside the antechamber, committees, and caucuses to obtain his goals.[11] Cameron distinguish himself in the Senate in 1890 when he supported the Federal Elections Bill, that ensured African Americans's voting protection rights in the Solid South.[11] However, on the whole, Cameron's nearly twenty years in the Senate remained undistinguished while for the most part he voted on the Republican Party line.[11]

After not being a candidate for reelection in 1896, Cameron engaged in several business enterprises in Harrisburg, Pennsylvania.

Cameron's second wife, the former Elizabeth Sherman, whom he married in 1878, was the niece of William Tecumseh Sherman and John Sherman and a close friend of Henry Brooks Adams.[13] Their daughter, Martha Cameron (born 1886), married Sir Ronald Charles Lindsay in 1909.

When Cameron died in 1918, his estate had been put in trust and was worth $4,000,000 ($41,200,000 - 2011).[14] Cameron had purchased his father Simon Cameron's affectionately known farm estate, "Donegal", on the Susquehanna River in Lancaster County.[14] Cameron lived at "Donegal" during the summer while during the winter he lived on his house boat off the South Carolina coast.[14]