John Jeremiah Jacob was born in Green Spring on the Potomac River north of Romney in (Hampshire County). Jacob's Hampshire roots made him the first of West Virginia's governors to be born within the present-day borders of the state. Jacob attended the Romney Academy in Romney and Dickinson College in Carlisle, Pennsylvania. Jacob practiced law and taught school in Hampshire County before accepting a teaching position at the University of Missouri in 1853. In 1858, he married Jane Baird.[1] Jacob worked as an attorney in Missouri during the American Civil War and returned to Romney after the war in 1865 to establish a law practice. In 1868, John Jeremiah Jacob was elected to the West Virginia House of Delegates.

Jacob was elected governor in 1870 to a two-year term making him the first of six consecutive Democratic governors. Jacob supported the elimination of all remaining legislation that discriminated against former Confederates. Jacob also presided over the establishment of new facilities to care for the mentally handicapped and the creation of statewide schools, known as normal schools, to train teachers. Most of these schools still exist as part of the state college system.

Portrait of John Jeremiah Jacob as Governor of West Virginia.

John Jeremiah Jacob's most important contribution as governor was the rewriting of West Virginia's state constitution. Moderates and former Confederate supporters themselves believed the original 1863 constitution was too biased in favor of pro-Union supporters. A new constitutional convention, controlled by Democrats, met in Charleston in 1872. The new constitution restricted the power of the legislature and expanded the governor's term in office from two to four years, prohibiting consecutive terms.

In 1872 Jacob was denied renomination by the Democratic Party, which was controlled by Camden. Jacob ran on the ad hoc "People's Independent" ticket with Republican support. He was re-elected by 2400 votes for a four-year term.[2] Camden's men controlled the legislature, and passed "ripper" laws that stripped Jacob of his appointment powers.

In 1875, the state government moved from Charleston and returned the capitol to Wheeling in Ohio County.

After Jacob left the governor's office, he served once again in the West Virginia House of Delegates from Ohio County in 1879 and as its circuit judge from 1881 to 1888. Jacob continued to practice law in Wheeling until his death in 1893. 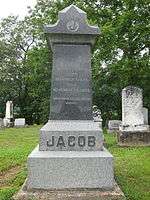