For the consul of 470, see Flavius Iordanes.

Mediterranean world as Jordanes wrote his Getica. The Byzantine Empire, capital Constantinople, is shown in pink. Conquests of Justinian shown in green.

Jordanes (/dʒɔːrˈdeɪniːz/),[1] also written Jordanis or, uncommonly, Jornandes,[2] was a 6th-century Roman bureaucrat,[3] who turned his hand to history later in life.

While he also wrote Romana about the history of Rome, his best-known work is his Getica, written in Constantinople [4] about AD 551.[5] It is the only extant ancient work dealing with the early history of the Goths.

Jordanes was asked by a friend to write this book as a summary of a multi-volume history of the Goths (now lost) by the statesman Cassiodorus. He was selected for his known interest in history (he was working on Rome's), his ability to write succinctly, and because of his own Gothic background. He had been a high-level notarius, or secretary, of a small client state on the Roman frontier in Scythia Minor, modern south-eastern Romania and north-eastern Bulgaria.[6]

Other writers, e.g. Procopius, wrote works which are extant on the later history of the Goths. As the only surviving work on Gothic origins, the Getica has been the object of much critical review. Jordanes wrote in Late Latin rather than the classical Ciceronian Latin. According to his own introduction, he had only three days to review what Cassiodorus had written, meaning that he must also have relied on his own knowledge. Some of his statements are laconic.

Jordanes writes about himself almost in passing:[7][8]

The Sciri, moreover, and the Sadagarii and certain of the Alani with their leader, Candac by name, received Scythia Minor and Lower Moesia. Paria, the father of my father Alanoviiamuth (that is to say, my grandfather), was secretary to this Candac as long as he lived. To his sister's son Gunthigis, also called Baza, the Master of the Soldiery, who was the son of Andag the son of Andela, who was descended from the stock of the Amali, I also, Jordanes, although an unlearned man before my conversion, was secretary.

Already in the Mommsen text edition of 1882 it was suggested that the very long name of Jordanes' father should be split into two parts: Alanovii Amuthis, both genitive forms. Jordanes' father's name would then be Amuth. The preceding word should then belong to Candac, signifying that he was an Alan. Mommsen, however, dismissed suggestions to emend a corrupt text.[9]

Paria was Jordanes' paternal grandfather. Jordanes writes that he was secretary to Candac, dux Alanorum, an otherwise unknown leader of the Alans.

Jordanes was notarius, or secretary to Gunthigis Baza, a magister militum, nephew of Candac, of the leading Ostrogoth clan of the Amali.

This was ante conversionem meam ("before my conversion"). The nature and details of the conversion remain obscure. The Goths had been converted with the assistance of Ulfilas (a Goth), made bishop on that account. However, the Goths had adopted Arianism. Jordanes' conversion may have been a conversion to the trinitarian Nicene creed, which may be expressed in anti-Arianism in certain passages in Getica.[10] In the letter to Vigilius he mentions that he was awakened vestris interrogationibus - "by your questioning".

Alternatively, Jordanes' conversio may mean that he had become a monk, or a religiosus, or a member of the clergy. Some manuscripts say that he was a bishop, some even say bishop of Ravenna, but the name Jordanes is not known in the lists of bishops of Ravenna. 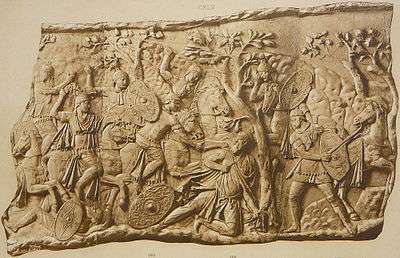 Jordanes wrote his Romana at the behest of a certain Vigilius. Although some scholars have identified this person with pope Vigilius, there is nothing else to support the identification besides the name. The form of address that Jordanes uses and his admonition that Vigilius "turn to God" would seem to rule out this identification.[9][11]

In the preface to his Getica, Jordanes writes that he is interrupting his work on the Romana at the behest of a brother Castalius, who apparently knew that Jordanes had had the twelve volumes of the History of the Goths by Cassiodorus at home. Castalius would like a short book about the subject, and Jordanes obliges with an excerpt based on memory, possibly supplemented with other material he had access to. The Getica sets off with a geography/ethnography of the North, especially of Scandza (16–24). He lets the history of the Goths commence with the emigration of Berig with three ships from Scandza to Gothiscandza (25, 94), in a distant past. In the pen of Jordanes, Herodotus' Getian demi-god Zalmoxis becomes a king of the Goths (39). Jordanes tells how the Goths sacked "Troy and Ilium" just after they had recovered somewhat from the war with Agamemnon (108). They are also said to have encountered the Egyptian pharaoh Vesosis (47). The less fictional part of Jordanes' work begins when the Goths encounter Roman military forces in the third century AD. The work concludes with the defeat of the Goths by the Byzantine general Belisarius. Jordanes concludes the work by stating that he writes to honour those who were victorious over the Goths after a history of 2030 years.

Several Romanian and American historians wrote about Jordanes' error when considering that Getae were Goths. A lot of historical data of Dacians and Getae were wrongly attributed to Goths.[12][13][14][15]

Christensen A. S., Troya C. and Kulikowski M.,[16][17][18] demonstrated in their works that Jordanes developed in Getica the history of Getic and Dacian peoples mixed with a lot of fantastic deeds. Caracalla (in 214) received "Geticus Maximus" and "Quasi Gothicus" titles following battles with Getae and Goths. Also Belisarius received "Geticus" title after battles against Getic tribes and not against Goths.

History of the Roman Empire