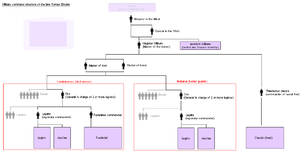 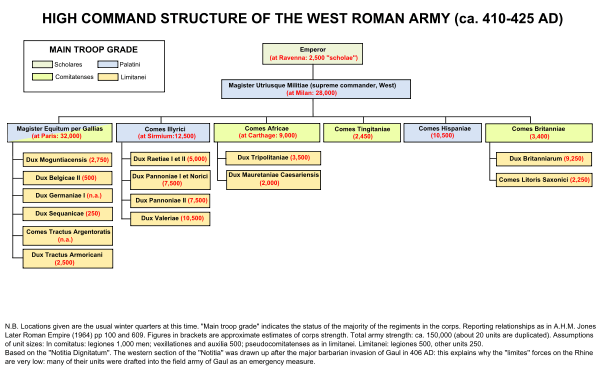 The high command structure of the West Roman army ca. 410–425, based on the Notitia Dignitatum.

Magister militum (Latin for "Master of the Soldiers", plural magistri militum) was a top-level military command used in the later Roman Empire, dating from the reign of Constantine. Used alone, the term referred to the senior military officer (equivalent to a war theatre commander, the emperor remaining the supreme commander) of the Empire. In Greek sources, the term is translated either as strategos or as stratelates.

Establishment and development of the office

For more details on this topic, see Late Roman army.

The title of magister militum was created in the 4th century, when Emperor Constantine the Great deprived the praetorian prefects of their military functions. Initially two posts were created, one as head of the foot troops, as the magister peditum ("Master of the Foot"), and one for the more prestigious horse troops, the magister equitum ("Master of the Horse"). The latter title had existed since Republican times, as the second-in-command to a Roman dictator.

Under Constantine's successors, the title was also established at a territorial level: magistri peditum and magistri equitum were appointed for every praetorian prefecture (per Gallias, per Italiam, per Illyricum, per Orientem), and, in addition, for Thrace and, sometimes, Africa. On occasion, the offices would be combined under a single person, then styled magister equitum et peditum or magister utriusquae militiae ("master of both forces").

As such they were directly in command of the local mobile field army of the comitatenses, composed mostly of cavalry, which acted as a rapid reaction force. Other magistri remained at the immediate disposal of the Emperors, and were termed in praesenti ("in the presence" of the Emperor). By the late 4th century, the regional commanders were termed simply magister militum.

In the Western Roman Empire, a "commander-in-chief" was sometimes appointed with the title of magister utriusquae militiae. This powerful office was often the power behind the throne and was held by Stilicho, Ricimer and others. In the East, there were two senior generals, who were appointed to the office of magister militum praesentalis.

In the course of the 6th century, internal and external crises in the provinces often necessitated the temporary union of the supreme regional civil authority with the office of the magister militum. In the establishment of the exarchates of Ravenna and Carthage in 584, this practice found its first permanent expression. Indeed, after the loss of the eastern provinces to the Muslim conquest in the 640s, the surviving field armies and their commanders formed the first themata.

Supreme military commanders sometimes also took this title in early medieval Italy, for example in the Papal States and in Venice, whose Doge claimed to be the successor to the Exarch of Ravenna.

Later, less formal use of the term

By the 12th century, the term was being used to describe a man who organized the military force of a political or feudal leader on his behalf. In the Gesta Herwardi, the hero is several times described as magister militum by the man who translated the original Early English account into Latin. It seems possible that the writer of the original version, now lost, thought of him as the 'hereward' – the supervisor of the military force. That this later use of these terms was based on the classical concept seems clear.[22]