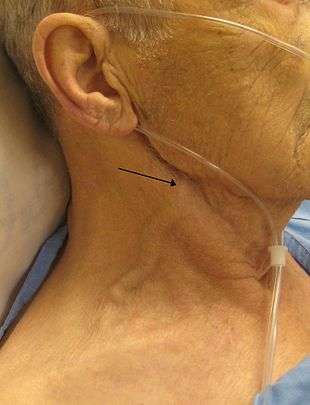 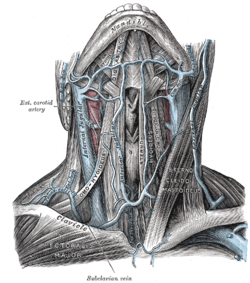 The veins of the neck, viewed from in front.

The JVP is easiest to observe if one looks along the surface of the sternocleidomastoid muscle, as it is easier to appreciate the movement relative to the neck when looking from the side (as opposed to looking at the surface at a 90 degree angle). Like judging the movement of an automobile from a distance, it is easier to see the movement of an automobile when it is crossing one's path at 90 degrees (i.e., moving left to right or right to left), as opposed to coming toward one.

Pulses in the JVP are rather hard to observe, but trained cardiologists do try to discern these as signs of the state of the right atrium.

Differentiation from the carotid pulse

The JVP and carotid pulse can be differentiated several ways:

The jugular venous pulsation has a biphasic waveform.

A classical method for quantifying the JVP was described by Borst & Molhuysen in 1952.[1] It has since been modified in various ways. A venous arch may be used to measure the JVP more accurately.

Moodley's Sign This sign is used to determine which waveform you are viewing. Feel the radial pulse while simultaneously watching the JVP. The waveform that is seen immediately after the arterial pulsation is felt is the 'v wave' of the JVP.

The term hepatojugular reflux was previously used as it was thought that compression of the liver resulted in "reflux" of blood out the hepatic sinusoids into the great veins thereby elevating right atrial pressure and visualized as jugular venous distention. The exact physiologic mechanism of jugular venous distention with a positive test is much more complex and the commonly accepted term is now "Abdominojugular test."

The abdominojugular test, when done in a standardized fashion, correlates best with the pulmonary arterial wedge pressure, and therefore, is probably a reflection of an increased central blood volume. In the absence of isolated right ventricular failure, seen in some patients with right ventricular infarction, a positive abdominojugular test suggests a pulmonary artery wedge pressure of 15 mm Hg or greater.[2]

Certain wave form abnormalities, include Cannon a-waves, or increased amplitude 'a' waves, are associated with AV dissociation (third degree heart block), when the atrium is contracting against a closed tricuspid valve, or even in ventricular tachycardia. Another abnormality, "c-v waves", can be a sign of tricuspid regurgitation. The absence of 'a' waves may be seen in atrial fibrillation.[3]

An elevated JVP is the classic sign of venous hypertension (e.g. right-sided heart failure). JVP elevation can be visualized as jugular venous distention, whereby the JVP is visualized at a level of the neck that is higher than normal. The paradoxical increase of the JVP with inspiration (instead of the expected decrease) is referred to as the Kussmaul sign, and indicates impaired filling of the right ventricle. The differential diagnosis of Kussmaul's sign includes constrictive pericarditis, restrictive cardiomyopathy, pericardial effusion, and severe right-sided heart failure.

An exaggerated "x" wave or diastolic collapse of the neck veins from constrictive pericarditis is referred to as Friedreich's sign.