Electrical conduction system of the heart

Principle of ECG formation. Note that the red lines represent the depolarization wave, not bloodflow.

The normal electrical conduction in the heart allows the impulse that is generated by the sinoatrial node (SA node) of the heart to be propagated to, and stimulate, the cardiac muscle (myocardium). The myocardium contracts after stimulation. It is the ordered, rhythmic stimulation of the myocardium during the cardiac cycle that allows efficient contraction of the heart, thereby allowing blood to be pumped throughout the body.

Electrical signals arising in the SA node (located in the right atrium) stimulate the atria to contract and travel to the atrioventricular node (AV node), which is located in the interatrial septum. After a delay, the stimulus diverges and is conducted through the left and right bundle of His to the respective Purkinje fibers for each side of the heart, as well as to the endocardium at the apex of the heart, then finally to the ventricular epicardium.[1]

On the microscopic level, the wave of depolarization propagates to adjacent cells via gap junctions located on the intercalated disk. The heart is a functional syncytium (not to be confused with a true "syncytium" in which all the cells are fused together, sharing the same plasma membrane as in skeletal muscle). In a functional syncytium, electrical impulses propagate freely between cells in every direction, so that the myocardium functions as a single contractile unit. This property allows rapid, synchronous depolarization of the myocardium. While advantageous under normal circumstances, this property can be detrimental, as it has potential to allow the propagation of incorrect electrical signals. These gap junctions can close to isolate damaged or dying tissue, as in a myocardial infarction (heart attack).

Cardiac muscle has some similarities to neurons and skeletal muscle, as well as important unique properties. Like a neuron, a given myocardial cell has a negative membrane potential when at rest. Stimulation above a threshold value induces the opening of voltage-gated ion channels and a flood of cations into the cell. The positively charged ions entering the cell cause the depolarization characteristic of an action potential. Like skeletal muscle, depolarization causes the opening of voltage-gated calcium channels and release of Ca2+ from the t-tubules. This influx of calcium causes calcium-induced calcium release from the sarcoplasmic reticulum, and free Ca2+ causes muscle contraction. After a delay, potassium channels reopen, and the resulting flow of K+ out of the cell causes repolarization to the resting state.[2][3]

There are important physiological differences between nodal cells and ventricular cells; the specific differences in ion channels and mechanisms of polarization give rise to unique properties of SA node cells, most important, the spontaneous depolarizations necessary for the SA node's pacemaker activity.

In order to maximize efficiency of contraction and cardiac output, the conduction system of the heart has:

Depolarization and the ECG

As the electrical activity is spreading throughout the atria, it travels via specialized pathways, known as internodal tracts, from the SA node to the AV node. 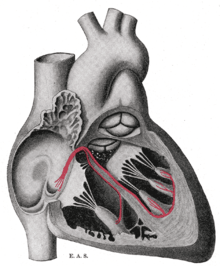 The bundle of His transmits a cascade of electrical action potentials, causing the contraction of the left and right ventricles.

The AV node functions as a critical delay in the conduction system. Without this delay, the atria and ventricles would contract at the same time, and blood wouldn't flow effectively from the atria to the ventricles. The delay in the AV node forms much of the PR segment on the ECG, and part of atrial repolarization can be represented by PR segment.

The two bundle branches taper out to produce numerous Purkinje fibers, which stimulate individual groups of myocardial cells to contract.[2]

The spread of electrical activity through the ventricular myocardium produces the QRS complex on the ECG.

The last event of the cycle is the repolarization of the ventricles. It is the restoring of the resting state. In the ECG, repolarization includes the J point, ST-segment, and T- and U-waves.[6]

An impulse (action potential) that originates from the SA node at a relative rate of 60 - 100bpm is known as normal sinus rhythm. If SA nodal impulses occur at a rate less than 60bpm, the heart rhythm is known as sinus bradycardia. If SA nodal impulses occur at a rate exceeding 100bpm, the consequent rapid heart rate is sinus tachycardia. These conditions are not necessarily bad symptoms, however. Trained athletes, for example, usually show heart rates slower than 60bpm when not exercising. If the SA node fails to initialize, the AV junction can take over as the main pacemaker of the heart. The AV junction consists of the AV node, the bundle of His and the surrounding area; it has a regular rate of 40 to 60bpm. These "junctional" rhythms are characterized by a missing or inverted P-Wave. If both the SA node and the AV junction fail to initialize the electrical impulse, the ventricles can fire the electrical impulses themselves at a rate of 20 to 40bpm and will have a QRS complex of greater than 12 bpm. this is necessary for the heart to be in good fuction.

Embryologic evidence of generation of the cardiac conduction system illuminates the respective roles of this specialized set of cells. Innervation of the heart begins with a brain only centered parasympathetic cholinergic first order. It is then followed by rapid growth of a second order sympathetic adrenergic system arising from the formation of the thoracic spinal ganglia. The third order of electrical influence of the heart is derived from the vagus nerve as the other peripheral organs form.[7]

The electrocardiogram (ECG or EKG) is often used to examine the electrical conduction system of the heart.

Some individuals, for example trained athletes, may have heart beats slower than 60 beats per minute when not exercising. If the SA node fails to initialize, the AV junction can take over as the main pacemaker of the heart. The AV junction "surrounds" the AV node (the AV node is not able to initialize its own impulses) and has a regular rate of 40 to 60 bpm. These "junctional" rhythms are characterized by a missing or inverted P-Wave. If both the SA node and the AV junction fail to initialize the electrical impulse, the ventricles can fire the electrical impulses themselves at a rate of 20 to 40 bpm and will have a QRS complex of greater than 120 ms.

In the event of arrhythmia, a pacemaker may be surgically inserted into the conduction system.