Iwate Prefecture (岩手県, Iwate-ken) is a prefecture of Japan. It is located in the Tōhoku region of Honshu island and contains the island's easternmost point.[2] The capital is Morioka.[3] Iwate has the lowest population density of any prefecture outside Hokkaido. Famous attractions include the Buddhist temples of Hiraizumi, including Chūson-ji and Mōtsū-ji with their treasures, Fujiwara no Sato, a movie lot and theme park in Esashi Ward, Oshu City, Tenshochi, a park in Kitakami City known for its big, old cherry trees and Morioka Castle in Morioka City.

There are several theories about the origin of the name "Iwate", but the most well known is the tale Oni no tegata, which is associated with the Mitsuishi or "Three Rocks" Shrine in Morioka. These rocks are said to have been thrown down into Morioka by an eruption of Mt. Iwate. According to the legend, there was once a devil who often tormented and harassed the local people. When the people prayed to the spirits of Mitsuishi for protection, the devil was immediately shackled to these rocks and forced to make a promise never to trouble the people again.[4] As a seal of his oath the devil made a handprint on one of the rocks, thus giving rise to the name Iwate, literally "rock hand". Even now after a rainfall it is said that the devil's hand print can still be seen there.

Bashō visited and wrote about Iwate in the journey described in Oku no Hosomichi. He was especially inspired by Hiraizumi.

Until the Meiji Restoration, the area of Iwate prefecture was part of Mutsu Province.[5]

Iwate Prefecture was created in 1876 in the aftermath of the Boshin Civil War which heralded the beginning of the Meiji Restoration. While the entire island of Honshū was claimed by the Japanese, or Yamato, government from earliest times as a sort of divine right or manifest destiny, the imperial forces were unable to occupy any part of what would become Iwate until 802 when two powerful Emishi leaders, Aterui and More, surrendered at Fort Isawa.

The area now known as Iwate Prefecture was inhabited by the Jomon people who left their artifacts throughout the prefecture. For example, a large number of burial pits from the Middle Jomon Period (2,800–1,900 BC) have been found in Nishida. Various sites from the Late Jomon Period (1,900–1,300 BC) including Tateishi, Makumae and Hatten contain clay figurines, masks and ear and nose shaped clay artifacts. The Kunenbashi site in Kitakami City has yielded stone "swords", tablets and tools as well as clay figurines, earrings and potsherds from the Final Jomon Period (1,300–300 BC).

The earliest mention of a Japanese presence dates to about 630 when the Hakusan Shrine was said to have been built on Mt. Kanzan in what is now Hiraizumi. At this time various Japanese traders, hunters, adventurers, priests and criminals made their way to Iwate. In 712 the province of Mutsu, containing all of Tohoku, was divided into Dewa Province, the area west of the Ou Mountains and Mutsu Province. In 729 Kokuseki-ji Temple was founded in what is now Mizusawa Ward, Oshu City by the itinerant priest Gyōki.

Little is known about relations between these Japanese frontiersmen and the native Emishi but in 776 they took a turn for the worse when large forces of the Yamato army invaded Iwate attacking the Isawa and Shiwa tribes in February and November of that year. More fighting occurred the next and following years but mostly in Dewa and the area south of present-day Iwate prefecture. This situation continued until March 787 when the Yamato army suffered a disastrous defeat in the Battle of Sufuse Village in what is now Mizusawa Ward, Oshu City. There the Emishi leaders More and Aterui leading a large cavalry force trapped the Yamato infantry and pushed them into the Kitakami River where their heavy armour proved deadly. Over 1,000 soldiers drowned that day. The Japanese general Ki no Asami Kosami was "rebuked" by the Emperor Kammu when he returned to Kyoto.

Since the Japanese could not win on the battlefield they resorted to other means to conquer the Emishi. Trade for superior quality iron wares and sake made the Emishi dependent on the Japanese for these valuable goods. Bribes were offered to the Emishi leaders in the form of Japanese citizenship and rank if they would defect. Finally a campaign of burning crops and kidnapping the Emishi women and children and relocating them to Western Japan was adopted. Many a stout warrior gave up the fight to join his family again.

In 801 Sakanoue no Tamuramaro began a new campaign against the Isawa Emishi having moderate success. Finally on 15 April 802 the Emishi leaders More and Aterui surrendered with some 500 warriors. The captives were taken to Kyoto for an audience with the emperor and beheaded at Moriyama in Kawachi Province against the wishes of General Sakanoue. This act of cruelty enraged the Emishi leading to another twenty or more years of fighting.

In the latter part of the Heian period, the town of Hiraizumi in what is now southern Iwate became the capital of the Northern Fujiwara. The warrior Minamoto no Yoshitsune fled here after the Gempei War.[6] 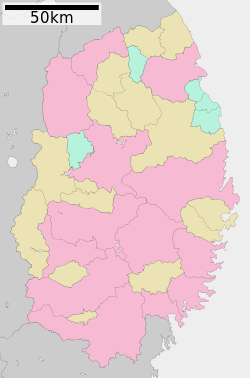 Map of Iwate Prefecture showing cities in pink, towns in yellow, and villages in cyan.

The Ou mountains on the west still contain active volcanoes such as Mt. Iwate (at 2,038 meters the highest point in the prefecture) and Mt. Kurikoma (1,627 meters). But the Kitakami Mountains running through the middle of the prefecture from north to south are much older and have not been active for thousands of years. Mt. Hayachine (1,917 meters) lies at the heart of the Kitakami range.

Besides these two mountain ranges and the rugged coastline, the prefecture is characterized by the Kitakami River which flows from north to south between the Ou and Kitakami mountain ranges. It is the fourth longest river in Japan and the longest in Tohoku. The basin of the Kitakami is large and fertile providing room for the prefecture's largest cities, industrial parks and farms.

In the past Iwate has been famous for its mineral wealth especially in the form of gold, iron, coal and sulfur but these are no longer produced. There is still an abundance of hot water for onsen, or hot springs, which is the basis of a thriving industry. The forests of the prefecture are another valuable resource. Before World War II the forests were mainly composed of beech but since then there has been a huge swing towards the production of faster growing Japanese cedar. Recently, though, there has been a push to restore the original beech forests in some areas.

Iwate's industry is concentrated around Morioka and specializes in semiconductor and communications manufacturing.

In 839, a meteorite fell from the sky in Dewa Province causing a large number of peasants in the area of Fort Isawa to desert.

On 13 July 869, a magnitude 8.6 earthquake and tsunami struck the coast of Iwate.

On 14 November 1230, volcanic activity was reported.

On 2 December 1611, a magnitude 8.1 earthquake and tsunami were reported to have killed over 3,000 horses and people.

On 13 May 1717, The Hanamaki area was struck with a magnitude 7.6 earthquake opening cracks in the ground everywhere. There was also widespread destruction of houses and shops.

Cholera outbreaks occurred in August 1879, in Miyako and Kuji.

In July 1882, a cholera outbreak in Kamaishi left 302 dead and warnings about drinking water were posted throughout the prefecture.

In April 1884, there was another outbreak of cholera in Kamaishi.

On 15 June 1896, at 7:32 am, a magnitude 8.5 earthquake struck offshore. The ensuing tsunami sent waves onto the coast of Iwate at Yoshihama, in what is now Sanriku town, reaching 24 meters in height. 18,158 people died in Iwate alone while some 10,000 homes were destroyed. Fishermen fishing the ocean about 20 miles offshore felt nothing, then returning home the next morning found the shore littered with their homes and the bodies of their loved ones.

In September 1899, dysentery spread throughout the prefecture killing 2,070 people.

There was a widespread crop failure due to violent storms in September 1902. Only 32,900 tons of rice were produced in Iwate, just 30% of the previous year's harvest.

In 1905, there was again a massive crop failure due to heavy rain and cold leading to famine in 1906. People were reduced to eating straw, acorns and roots.

In August 1957, there was volcanic activity on Mt. Kurikoma.

There was volcanic activity on Mt. Akita-Komagatake from September to December, 1970 with lava flows visible from Morioka.

At 8:43 am on 14 June 2008, Iwate was struck by a 7.2 magnitude earthquake. The epicenter was about 8 km underground in Ichinoseki City. Thirteen deaths were reported and massive landshifts occurred in Northern Miyagi and Southern Iwate.

JR East operates passenger and freight trains on the Tōhoku Main Line or Tōhoku-honsen in Iwate but sold the track north of Morioka to the Iwate Galaxy Railway Line in 2002. The two lines share track with JR still running freight trains and some passenger trains over IGR track and IGR running occasional passenger trains as far south as Hanamaki. There is a large JR freight yard and maintenance facility in Yahaba.

Other lines include the Sanriku Railway which operates two lines along the coast, the North Rias Line and the South Rias Line.