For the game, see Oni (video game). For other uses, see Oni (disambiguation).

Oni (鬼) are a kind of yōkai from Japanese folklore, variously translated as demons, devils, ogres, or trolls. They are popular characters in Japanese art, literature and theatre.[1]

Depictions of oni vary widely but usually portray them as hideous, gigantic ogre-like creatures with sharp claws, wild hair, and two long horns growing from their heads.[2] They are humanoid for the most part, but occasionally, they are shown with unnatural features such as odd numbers of eyes or extra fingers and toes.[3] Their skin may be any number of colors, but red and blue are particularly common.[4][5]

They are often depicted wearing tiger-skin loincloths and carrying iron clubs called kanabō (金棒). This image leads to the expression "oni with an iron club" (鬼に金棒, oni-ni-kanabō), that is, to be invincible or undefeatable. It can also be used in the sense of "strong beyond strong", or having one's natural quality enhanced or supplemented by the use of some tool. In addition to this, it can mean to go overboard, or be unnecessarily strong or powerful.[6][7]

The word "oni" is sometimes speculated to be derived from on, the on'yomi reading of a character (隠) meaning to hide or conceal, as oni were originally invisible spirits or gods which caused disasters, disease, and other unpleasant things. These nebulous beings could also take on a variety of forms to deceive (and often devour) humans. Thus the Chinese character 鬼 (pinyin: guǐ; Jyutping: gwai2) meaning "ghost" came to be used for these formless creatures.

The invisible oni eventually became anthropomorphized and took on its modern, ogre-like form, partly via syncretism with creatures imported by Buddhism, such as the Indian rakshasa and yaksha, the hungry ghosts called gaki, and the devilish underlings of Enma-Ō who punish sinners in Jigoku (Hell).They share many similarities with the Arabian Jinn. 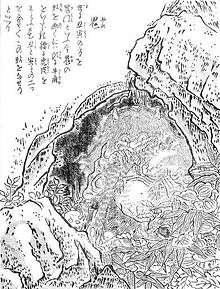 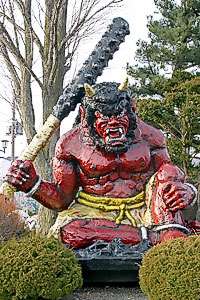 A statue of a red oni wielding a kanabō.

Another source for the oni's image is a concept from China and Onmyōdō. The northeast direction was once termed the kimon (鬼門, "demon gate"), and was considered an unlucky direction through which evil spirits passed. Based on the assignment of the twelve zodiac animals to the cardinal directions, the kimon was also known as the ushitora (丑寅), or "Ox Tiger" direction, and the oni's bovine horns and cat-like fangs, claws, and tiger-skin loincloth developed as a visual depiction of this term.[8]

Temples are often built facing that direction, and Japanese buildings sometimes have L-shaped indentions at the northeast to ward oni away. Enryakuji, on Mount Hiei northeast of the center of Kyoto, and Kaneiji, in that direction from Edo Castle, are examples. The Japanese capital itself moved northeast from Nagaoka to Kyoto in the 8th century.[9]

Some villages hold yearly ceremonies to drive away oni, particularly at the beginning of Spring. During the Setsubun festival, people throw soybeans outside their homes and shout "Oni wa soto! Fuku wa uchi!" ("鬼は外！福は内！", " Oni go out! Blessings come in!").[10] Monkey statues are also thought to guard against oni, since the Japanese word for monkey, saru, is a homophone for the word for "leaving". Folklore has it that holly can be used to guard against Oni.[11] In Japanese versions of the game tag, the player who is "it" is instead called the "oni".[12]

In more recent times, oni have lost some of their original wickedness and sometimes take on a more protective function. Men in oni costumes often lead Japanese parades to ward off any bad luck, for example. Japanese buildings sometimes include oni-faced roof tiles called onigawara (鬼瓦), which are thought to ward away bad luck, much like gargoyles in Western tradition.[13]

Oni are prominently featured in the Japanese children's story Momotaro (Peach Boy), and the book The Funny Little Woman.

Many Japanese idioms and proverbs also make reference to oni. For example, the expression oya ni ninu ko wa oni no ko (親に似ぬ子は鬼の子) means literally "a child that does not resemble its parents is the child of an oni," but it is used idiomatically to refer to the fact that all children naturally take after their parents, and in the odd case that a child appears not to do so, it might be because the child's true biological parents are not the ones who are raising the child. Depending on the context in which it is used, it can have connotations of "children who do not act like their parents are not true human beings," and may be used by a parent to chastise a misbehaving child. Variants of this expression include oya ni ninu ko wa onigo (親に似ぬ子は鬼子) and oya ni ninu ko wa onikko (親に似ぬ子は鬼っ子).[14] There is also a well known game in Japan called kakure oni (隠れ鬼), which means "hidden oni", or more commonly kakurenbo, which is the same as the hide-and-seek game that children in western countries play.