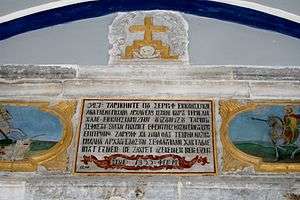 An inscription in Karamanli Turkish on the entrance of the former Greek Orthodox church of Agia Eleni in Sille, near Konya.

Karamanlı Turkish is both a form of written Turkish, and a dialect of Turkish spoken by the Karamanlides, a community of Turkish-speaking Orthodox Christians in Ottoman Turkey. While the official Ottoman Turkish was written in the Arabic script, the Karamanlides used the Greek alphabet for writing its form of Turkish. Such texts are called Karamanlidika (Καραμανλήδικα / Καραμανλήδεια γραφή) or Karamanli Turkish today. Karamanli Turkish had its own literary tradition and produced numerous published works in print in the 19th century, some of them published by Evangelinos Misailidis, by the Anatoli or Misailidis publishing house (Misailidis 1986, p. 134).

Karamanli writers and speakers were expelled from Turkey as part of the Greek-Turkish population exchange of 1923. Some speakers preserved their language in the diaspora. The writing form stopped being used immediately after the Turkish state adopted the Latin alphabet.

A fragment of a Manuscript written in Karamanli was also found in the Cairo Geniza.[2]