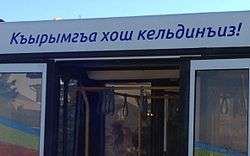 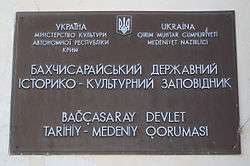 Crimean Tatar Latin script on a plate in Bakhchisaray 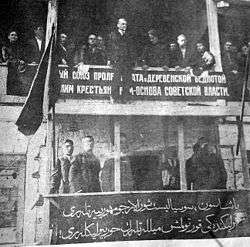 Crimean Tatar (Crimean Tatar: Къырымтатарджа Qırımtatarca, Къырымтатар тили Qırımtatar tili), also called Crimean Turkish[1] or simply Crimean,[1] is a language spoken for centuries in Crimea. It is a Turkic language spoken in Crimea and the Crimean Tatar diasporas of Uzbekistan, Turkey, Romania and Bulgaria, as well as small communities in the United States and Canada. It should not be confused with Tatar proper, spoken in Tatarstan and adjacent regions in Russia; the languages are related but not mutually intelligible. Though only distantly related, it has been extensively influenced by nearby Oghuz Turkic languages such as Turkish, Turkmen, and Azerbaijani.

Today, more than 260,000 Crimean Tatars live in Crimea. Approximately 150,000 reside in Central Asia (mainly in Uzbekistan), where their ancestors had been exiled in 1944 during World War II by the Soviet Union. However, of all these people, mostly the older generations are the only ones still speaking Crimean Tatar.[6] In 2013, the language was estimated to be on the brink of extinction, being taught in only around 15 schools in Crimea. Turkey has provided support to Ukraine, to aid in bringing the schools teaching in Crimean Tatar to a modern state.[7] An estimated 5 million people of Crimean origin live in Turkey, descendants of those who emigrated in the 19th and early 20th centuries. Of these an estimated 2,000 still speak the language.[6] Smaller Crimean Tatar communities are also found in Romania (22,000), Bulgaria (6,000), and the United States.[6] Crimean Tatar is one of the seriously endangered languages in Europe.[8]

Almost all Crimean Tatars are bilingual or multilingual, using as their first language the dominant languages of their respective home countries, such as Ukrainian, Turkish, Uzbek, or Russian.

Each of the three subethnic groups of the Crimean Tatars has its own dialect. The dialect of the Nogays, the former inhabitants of the Crimean steppe (should not be confused with Nogai people), is of Kypchak–Nogay origin.

The Yalıboylus, who lived on the southern coast of Crimea before 1944, speak an Oghuz dialect.

The Tat Tatars from the Crimean Mountains (should not be confused with Tat people) use a middle dialect of Kypchak–Cuman origin. The dialect is a direct descendant of the Cuman language, but it has been strongly influenced by Oghuz. The modern Crimean Tatar written language is based on Tat because the Tats comprise about 55% of the total Crimean Tatar population.

In 1876, the different Turkic Crimean dialects were made into a uniform written language by Ismail Gasprinski. A preference was given to the Oghuz dialect of the Yalıboylus, in order to not break the link between the Crimeans and the Turks of the Ottoman Empire. In 1928, the language was reoriented to the middle dialect spoken by the majority of the people.

In 1928, the alphabet was replaced with the Uniform Turkic Alphabet based on the Latin script. The Uniform Turkic Alphabet was replaced in 1938 by a Cyrillic alphabet. Since the 1990s, the government has encouraged replacing the script with a Latin version again, but the Cyrillic is still widely used (mainly in published literature and newspapers). The current Latin-based Crimean Tatar alphabet is the same as the Turkish alphabet, with two additional characters: Ñ ñ and Q q.

Crimean Tatar was the native language of the poet Bekir Çoban-zade.

The vowel system of Crimean Tatar is similar to some other Turkic languages.[9] Because high vowels in Crimean Tatar are short and reduced, /i/ and /ɯ/ are realized close to [ɪ], even though they are phonologically distinct.[10]

According to constitution of Republic of Crimea Crimean Tatar language is an official language in Crimea as well as Russian and Ukrainian.

According to the constitution of the Autonomous Republic of Crimea, as published in Russian by its Verkhovna Rada,[12] Russian and Crimean Tatar languages enjoy a "protected" (Russian: обеспечивается ... защита) status; every citizen is entitled, at his request (ходатайство), to receive government documents, such as "Passport, Birth certificate and others" in Crimean Tatar. According to the constitution of Ukraine, however, Ukrainian is the only official language in all of Ukraine. Recognition of Russian and Crimean Tatar was a matter of political and legal debate.

Before the Sürgün, the 18 May 1944 deportation by the Soviet Union of Crimean Tatars to internal exile in Uzbek SSR, Crimean Tatar had an official language status in the Crimean Autonomous Soviet Socialist Republic.

Crimean Tatar can be written in either the Cyrillic or Latin alphabets, both modified to the specific needs of Crimean Tatar, and either used respective to where the language is used. Under Ukrainian rule, the Latin alphabet was preferred, but upon Russia's annexation of Crimea, Cyrillic became the sole official script.

Â â symbol is not considered to be a separate letter.

Comparison with other languages

Because of its common name, Crimean Tatar is sometimes mistaken to be a dialect of Tatar proper. Although these languages are related (because both are Turkic), the Kypchak languages closest to Crimean Tatar are, as mentioned above, Kumyk, Karachay-Balkar and Nogay, not Tatar.