Tuvan (Tuvan: тыва дыл, tıwa dıl; /tʰɯʋa tɯl/), also known as Tuvinian, Tyvan or Tuvin, is a Turkic language spoken in the Republic of Tuva in south-central Siberia in Russia. The language has borrowed a great number of roots from the Mongolian language, Tibetan and more recently from the Russian language. There are small diaspora groups of Tuvan people that speak distinct dialects of Tuvan in the People's Republic of China and in Mongolia.

While this history focuses on mostly the people of Tuva, many linguistics argue that language is inevitably intertwined with the socio-historical situation of a language itself.[3] The earliest record of Tuvan is from the early 19th century by Wū lǐ yǎ sū tái zhì è (烏里雅蘇台志略), Klaproth 1823, Castrén 1857, Katanov and Radlov etc .[4] The name Tuva goes back as early as the publication of the Secret History of the Mongols. The Tuva (as they refer to themselves) have also been referred to as Soyons, Soyots or Uriankhais historically.[5] The Tuvan people have been ruled by China, Russia, and Mongolia for thousands of years. Their most recent time of independence was from 1921-1944, when they were considered the Tuvan’s Peoples Republic.[6] Many sources say there has been extreme tension between the Soviet Union/Russian Federation government and leaders in the Tuvan nation since 1944, when Tuva lost its independence to the USSR. In 1990, violence broke out between Tuvans and the USSR government.[7] According to a study completed by social scientists Louk Hagendoorn, Edwin Poppe, and Anca Minescu in 2008, the Tuvan people wanted to be as independent as possible from the Russian federation, following the collapse of the Soviet Union.[7] They especially emphasized their want for independence in terms of their language and culture. The study demonstrates that the reason behind this was partially based on prejudice. The many minority ethnic and linguistic groups in Russia compete for economic resources and hold closely on to their individual identities, by emphasizing the importance of language and culture.[5] Since 2000, the Russian federation has been trying to reduce separatist tendencies of ethnic minorities in Russia, but the tendencies persist.[7]

Other dialects include those spoken by the Dzungar, the Tsengel and the Dukha bands of Tuvans, but currently these uncommon dialects are not comprehensively documented. Different dialects of the language exist across the geographic region in which Tuvan is spoken. Dr. David K. Harrison, who completed his dissertation on the Tuvan language in 2001, argues that the divergence of these dialects relates to the nomadic nature of the Tuvan nation.[8] One subset is the Jungar-Tuvan language, originating in the Altay mountains in the Western region of Mongolia. There is no accurate number of Jungar-Tuvan speakers because most currently reside in China, and the Chinese include Tuvan speakers as Mongolians in their census.[5]

Vowels in Tuvan exist in three varieties: short, long and short with low pitch. Tuvan long vowels have a duration that is at least (and often more than) twice as long as that of short vowels. Contrastive low pitch may occur on short vowels, and when it does, it causes them to increase in duration by at least one-half. When using low pitch, Tuvan speakers employ a pitch that is at the very low end of their modal voice pitch. For some speakers, it is even lower and using what is phonetically known as creaky voice. When a vowel in a monosyllabic word has low pitch, speakers apply low pitch only to the first half of that vowel (e.g. [àt] 'horse'). This is followed by a noticeable pitch rise, as the speaker returns to modal pitch in the second half of the vowel.

The acoustic impression is similar to that of a rising tone (e.g. the rising pitch contour of the Mandarin second tone, although the Tuvan pitch begins much lower.) However, Tuvan is considered a pitch accent language with contrastive low pitch instead of a tonal language. When the low pitch vowel occurs in a multi-syllabic word, there is no rising pitch contour or lengthening effect (e.g. [àdɯ] 'his/her/its horse'). These low pitch vowels were previously referred to in the literature as either kargyraa or pharyngealized vowels. Phonetic studies have demonstrated that the defining characteristic of these vowels is low pitch. See Harrison 2001 for a phonetic and acoustic study of Tuvan low pitch vowels.

Khabtagaeva divided the transformation of these loanwords into two periods: the early layer and the late layer. The words in the early layer are words that either: the Mongolic preserved the conjunciton,, the VCV conjunction was preserved but the long vowel still developed when it entered the Tuvan language, or when the stress is on the last syllable, a long vowel in the loan word replaced a short vowel in the original word. The Late Layer includes loanwords in which the long vowel does not change when entering Tuvan.[9]

Vowels may also be nasalized, in the environment of nasal consonants, but nasalization is non-contrastive. Tuvan vowels in word-initial syllable have a generally a low pitch. These vowels do not contrast significantly with both short and long vowels.[8]

Vowel harmony in Tuvan is exhibited in its phonology, Subject-Object-Verb word order, head-final syntax, and heavy use of multiverb constructions.[10] Tuvan has two systems of vowel harmony which strictly govern the distribution of vowels within words and suffixes. Backness harmony or what is sometimes called 'palatal' harmony requires all vowels within a word to be either back or front. Rounding harmony or what is sometimes called 'labial' harmony requires a vowel to be rounded if it is a high vowel and it appears in a syllable immediately following a rounded vowel. Low rounded vowels [ø] [o] are restricted to the first syllable of a word, and a vowel in a non-initial syllable may only be rounded if it meets the conditions of rounding harmony (it must both be a high vowel [y] [u] and be preceded by a rounded vowel). See Harrison 2001 for a detailed description of Tuvan vowel harmony systems.

Tuvan marks nouns with six cases: genitive, accusative, dative, ablative, locative, and allative. Each case suffix has a rich variety of uses and meanings, only the most basic uses and meanings are shown here.

Tuvan vocabulary is largely Turkic in origin but marked by a large number of Mongolian loanwords. The language has also borrowed several Mongolian suffixes. In addition, there exist Ketic and Samoyedic substrata. A Tuvan talking dictionary is produced by the Living Tongues Institute.[11]

In the past, Tuvans used Mongolian as their written language. 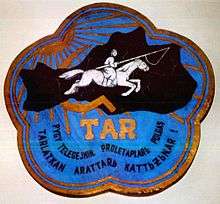 The Latin-based alphabet for Tuvan was devised in 1930 by a Tuvan Buddhist monk, Mongush Lopsang-Chinmit (a.k.a. Lubsan Zhigmed). A few books and newspapers, including primers intended to teach adults to read, were printed using this writing system. Lopsang-Chinmit was later executed in Stalinist purges on 31 December 1941.[13]

By September 1943, this Latin-based alphabet was replaced by a Cyrillic-based one, which is still in use to the present day. In the post-Soviet era, Tuvan and other scholars have taken a renewed interest in the history of Tuvan letters.

There is no official transliteration standard for transforming the Cyrillic-based Tuvan alphabet into Latin. Common schemes in use by various media sources rely upon international standards for transliterating other Cyrillic languages such as Russian while scholars of Turkology generally rely upon common Turkic-styled spelling.

Tuvans in China, who live mostly in the Xinjiang Autonomous Region, are included under the Mongol nationality.[14] Some Tuvans reportedly live at Lake Kanas in the northwestern part of Xinjiang in China where they are not officially recognized, are counted as a part of the local Oirat Mongol community that is counted under the general label 'Mongol'. Oirat and Tuvan children attend schools in which they use Chakhar Mongolian[15] and Chinese, native languages of neither group.