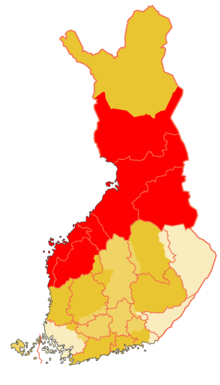 Historical province of Ostrobothnia(the borders of modern provinces with pink colour and the modern border of Finland, same as at the signing moment of final act of CSCE 1975)

Ostrobothnia, Swedish: Österbotten (literally "Eastern Bottom", "botten" deriving from Old Norse botn in the meaning of 'bay',[1] and Latinized "bothnia"), Finnish: Pohjanmaa (literally "Bottom (low) lands") is a historical province comprising a large western and northern part of modern Finland (which was then the "eastern half" of Sweden). It is bounded by Karelia, Savonia, Tavastia and Satakunda in the south, the Bothnian Sea, Bothnian Bay and Swedish Västerbotten in the west, Laponia in the north and Russia in the east.

The word pohja means either "north" or "bottom", and maa is "land". In ancient Scandinavian understanding, the north was the bottom of the world, where the Sun disappeared each night. The word was associated with the cardinal direction because the houses were constructed such that the back of the house faced north, the coldest direction.

The earliest human presence in Ostrobothnia is represented by the 120,000-year-old settlement near Kristinestad, possibly representing the only remaining evidence of pre-ice age presence of neanderthal men in Fenno-Scandinavia. Modern humans arrived 9,000 years ago, as soon as the ice sheet disappeared and enough land had risen above sea level. A complex hunter-gatherer society emerged along the coast. Among the visible remains from this time are the Neolithic stone enclosures unique to Ostrobothnia known locally as Giant's Churches (Finnish: Jätinkirkko).[2] They are a rare example of monumental architecture built by hunter-gatherers in northern Europe.[2]

During the Bronze and Iron Ages an agrarian society eventually replaced earlier structures in southern Ostrobothnia, whereas traditional economies survived much longer in the northern and inland locations. During the early Middle Ages settlers from Sweden inhabited the coastal strip of Southern and Central Ostrobothnia, eventually forming administrative units under Swedish rule. The Swedish crown established Korsholm as the administrative centre. At the same time, large parts of the inland Ostrobothnia were colonized by Finnish settlers from Savonia. In the 16th century, the Finnish settlement and agriculture had reached the northern part of the east coast of Gulf of Bothnia (north of Kalajoki). This led to severe clashes with the Orthodox Christian Karelians, who were supported by their suzerain Russia. Throughout the late 16th century, both parties engaged in constant raid-type warfare against the enemy civilian populations, although formal peace existed for the most time. For example, in winter 1590, men of Ii and Liminka raided the Pechenga Monastery on the Arctic Sea, while the Karelians raided Ii and Liminka, burning almost all dwellings. The war slowly ebbed due to the Treaty of Tyavzino in 1595.

During the late stages of the war, the Swedish crown had stationed regular troops in the province to help the population in defence. This was in marked contrast to the earlier practice where the province had been responsible for its own defence. After the war, the Ostrobothnians revolted against the stationing of regular soldiers to the province, leading to the Cudgel War, the last peasant uprising in Finnish history. The war was a devastating loss to the peasants and marked the definitive end of the province as semi-independent, unregulated frontier.

Katarina Asplund (1690-1758), a Finnish pietist, was a leading figure within the pietism movement in Ostrobothnia, and was often in conflict with the authorities on charges of blasphemy.[3]

The first towns in Ostrobothnia were established in the 17th century, obtaining soon prominence through the import of pine tar, which was essential for the maintenance of the wooden ships of the period. The Great Northern War was the low point in the history of the province, which was occupied in 1714–1721 by Russian troops, along with the rest of Finland. In Ostrobothnia, the Russian troops engaged in the creation of a wide strip of no-man's land between the occupied Finland and Sweden proper. Especially, the Northern Ostrobothnia suffered heavily, losing a fourth of its population due to ravages of war.[4]

In 1809 Ostrobothnia was separated from Sweden along with the rest of Finland. However, during the last two centuries, the different regions of Ostrobothnia have diverged so greatly that relating their histories in the article of the historical province is not prudent. The regions of Norrbotten and Västerbotten remain on the Swedish side.

Ostrobothnia can be roughly said to be divided from Southern parts of Finland by the watershed Suomenselkä, a glacial formation on the Northern part of which the waters flow to Merenkurkku or Perämeri and on the Southern part to Gulf of Finland or to Selkämeri. In the East, the historical Ostrobothnia is bordered by Russian Karelia on Maanselkä watershed, which divides the estuaries of Oulujoki and Iijoki from the estuaries of rivers flowing to White Sea. In the North, the historical borders of Ostrobothnia towards Västerbotten and Laponia are somewhat undefined, partly because the permanently fixed inhabitation was a relatively new phenomenon at the time of the introduction of county system, which replaced the older provincial divisions. On the coast, the historical border ran somewhere between the Torniojoki and Iijoki, without any formal definition in the inland. However, the watershed between Kemijoki, Iijoki and Olhavajoki estuaries may serve as a definition of the border between Laponia and Ostrobothnia.

The stereotypical topographic feature of Ostrbothnia is the coastal plain North of Suomenselkä, in the nowaday regions of Ostrobothnia, Southern Ostrobothnia and Central Ostrobothnia. It is glacial (Weichsel glaciation) seabed, its topography flat with few hills, and characterized by South-East to North-West running rivers, which were formed by waters at the end of the glaciation. Due to the depression caused by the ice masses which lay on the top of the ground, the ground level is still rising, at a rate of circa 9 mm per annum. Due to the very flat topography, this causes the Gulf of Bothnia to withdraw several kilometers per century and has historically caused great problems to navigation and to the harbours of the coastal cities of the region.

As another result of the glaciation, all the numerous rivers of the region run from South East towards North West. The bedrock in the area, where exposed, features SE-NW oriented lines carved by rocks which were pushed South-East by the advancing ice mass during the glaciation. To the end of the ice age, the ice mass melted away, leaving its marks all over the country: huge boulders (glacial erratics), carved lines on the bedrock, sand pits etc.

On the coast of Northern Ostrobothnia, the topography remains flat, but instead of fields of Central and Southern Ostrobothnia, the land is largely covered with marsh. Towards inland, the terrain becomes more varied. Here, the taiga and hills dominate the landscape, with an occasional village or small town. The most important terrain feature in inland Ostrobothnia is the large Oulujärvi, a lake of 887 km2. Most of the activity in the region of Kainuu, is centered to the municipalities around this lake, which is connected to sea via Oulujoki. North of Kainuu, Koillismaa forms one of the most rural and poorest sub-regions in Finland. 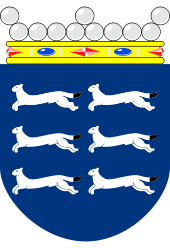