This article is about the contemporary region of Finland. For other uses of Uusimaa, see Uusimaa (disambiguation).

Uusimaa or Nyland (Finnish: [ˈuːsimɑː]; Swedish: [ˈnyːland]; both names mean “new land”) is a region in Finland. It borders the regions Southwest Finland, Tavastia Proper, Päijänne Tavastia and Kymenlaakso. Finland’s capital Helsinki (its largest city) and its second largest city Espoo are both located centrally in Uusimaa, making it by far the most populous region.

Uusimaa was, along with the rest of Southern and Western Finland, held by the Kingdom of Sweden from the 12th or 13th century.

The coastal Uusimaa had earlier been sparsely populated, mostly by Tavastians, but was from the 12th century populated by Swedish settlers, mostly from Hälsingland, and Swedish-speaking villages came up near the mouths of Vantaanjoki and Keravanjoki.

The names Uusimaa and Nyland mean “new land” in English. The Swedish-language name Nyland appears in the documents from the 14th century. The Finnish-language name Uusimaa appears for the first time in 1548 as Wsimaa in the first translation of the New Testament to Finnish by Mikael Agricola.[2]

The Finnish provinces were ceded to Imperial Russia in the War of Finland in 1809. After this, Uusimaa became the Province of Uusimaa of the old lääni system. From 1997 to 2010, Uusimaa was a part of the Province of Southern Finland. It has been divided in the regions of Uusimaa and Eastern Uusimaa. In 2011, two regions were merged.

Uusimaa is an officially bilingual region, with both Finnish and Swedish having the same status.

The region, especially coastal areas, is traditionally Swedish-speaking, the traditional regional dialects of Swedish (nyländska) are currently mostly spoken in Eastern Uusimaa, while in the rest of Uusimaa Swedish language became more standardised.

The Finnish-speaking population started to grow when the capital of the Grand Duchy of Finland was moved from Turku to Helsinki by Emperor of Russia Alexander I in 1812, and the region attracted settlers from other parts of Finland. Helsinki's slang, stadin slangi, first evolved in the late 19th century.

8.5% of population of the region speak Swedish language as native. 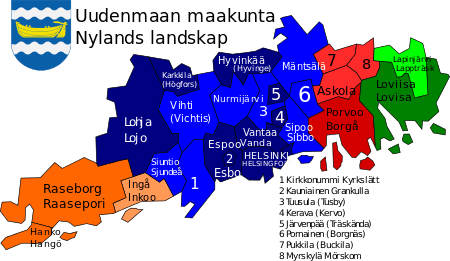 The region of Uusimaa is made up of 26 municipalities, of which 13 have city status (marked in bold). 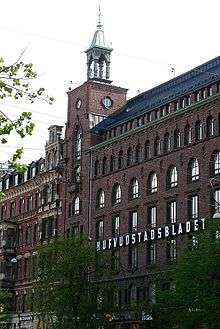 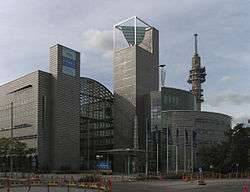 The largest subscription newspapers published in the region are Helsingin Sanomat and Hufvudstadsbladet in Helsinki, Aamuposti in Hyvinkää, Länsi-Uusimaa in Lohja, Loviisan Sanomat and Östra Nyland in Loviisa, Uusimaa and Borgåbladet in Porvoo, Västra Nyland in Raasepori, and Keski-Uusimaa in Tuusula. Also two popular tabloid newspapers, Iltalehti and Ilta-Sanomat, are published there.

The coat of arms of the region shows a yellow boat which is a symbol for the coastal areas, and two silver streams which are the symbol for rivers.