Charles G. Rosher, A.S.C. (November 17, 1885 – January 15, 1974) was a two-time Academy Award-winning cinematographer who worked from the early days of silent films through the 1950s. He was the first cinematographer to receive an Academy Award, along with 1929 co-winner Karl Struss. 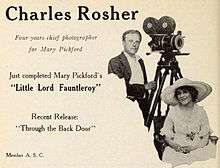 Charles Rosher was born in London in 1885. He studied photography in his youth but earned a reputation early as a newsreel cameraman, before moving to the United States in 1909. He subsequently found work for David Horsley working in his production company in New Jersey. Because early film was largely restricted to using daylight, Horsley relocated his production company to Hollywood in 1911, taking Rosher with him, and opened the first movie studio there. This made Rosher the first full-time cameraman in Hollywood.

In 1913 he went to Mexico to film newsreel footage of Pancho Villa's rebellion. In 1918, he was one of the founders of the American Society of Cinematographers and served as the group's first Vice-President. In the 1920s he was one of the most sought-after cinematographers in Hollywood, and a personal favorite of stars such as Mary Pickford, working with her on films such as Suds (1920), Little Annie Rooney (1925), and even Coquette (1929), Pickford's first sound film. His work with Karl Struss on F.W. Murnau's 1927 film Sunrise is viewed as a milestone in cinematography. He shot five films for producer David O. Selznick, including Rockabye (1932), Our Betters (1933) and Little Lord Fauntleroy (1936).

Rosher worked at several studios, but spent the last twelve years of his career exclusively at Metro-Goldwyn-Mayer, photographing such films as Annie Get Your Gun, Show Boat, Kiss Me Kate, and The Yearling.

Rosher was the father of actress Joan Marsh and cinematographer Charles Rosher, Jr.

In addition, Rosher also received two Eastman Medals (named for George Eastman), Photoplay magazine's Gold Medal, and the only fellowship ever awarded by the Society of Motion Picture Engineers.