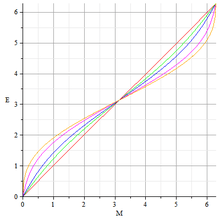 Kepler's equation solutions for five different eccentricities between 0 and 1

In orbital mechanics, Kepler's equation relates various geometric properties of the orbit of a body subject to a central force.

It was first derived by Johannes Kepler in 1609 in Chapter 60 of his Astronomia nova,[1][2] and in book V of his Epitome of Copernican Astronomy (1621) Kepler proposed an iterative solution to the equation.[3][4] The equation has played an important role in the history of both physics and mathematics, particularly classical celestial mechanics.

The 'eccentric anomaly' E is useful to compute the position of a point moving in a Keplerian orbit. As for instance, if the body passes the periastron at coordinates x = a(1 − e), y = 0, at time t = t0, then to find out the position of the body at any time, you first calculate the mean anomaly M from the time and the mean motion n by the formula M = n(t − t0), then solve the Kepler equation above to get E, then get the coordinates from:

The Hyperbolic Kepler equation is:

where H is the hyperbolic eccentric anomaly. This equation is derived by multiplying Kepler's equation by the square root of −1; i = √−1 for imaginary unit, and replacing

The Radial Kepler equation is:

where t is time, and x is the distance along an x-axis. This equation is derived by multiplying Kepler's equation by 1/2 making the replacement

Calculating M for a given value of E is straightforward. However, solving for E when M is given can be considerably more challenging.

Confusion over the solvability of Kepler's equation has persisted in the literature for four centuries.[5] Kepler himself expressed doubt at the possibility of ﬁnding a general solution.

The inverse Kepler equation is the solution of Kepler's equation for all real values of e:

These series can be reproduced in Mathematica with the InverseSeries operation.

These functions are simple Taylor series. Taylor series representations of transcendental functions are considered to be definitions of those functions. Therefore, this solution is a formal definition of the inverse Kepler equation. While this solution is the simplest in a certain mathematical sense, for values of e near 1 the convergence is very poor, other solutions are preferable for most applications. Alternatively, Kepler's equation can be solved numerically.

The solution for e ≠ 1 was discovered by Karl Stumpff in 1968,[7] but its significance wasn't recognized.[8]

Algorithm for the inverse Kepler equation

Note that E = M+e·sin(E). Repeatedly substituting the expression on the right for the E on the right yields a simple fixed point iteration algorithm for evaluating E(e,M).

The number of iterations, n, depends on the value of e.

to first order in the small quantities M - E and e, or,

The algorithm actually uses a simplified version of Newton's method to improve on a value for E. Although Newton's method usually converges faster to the correct value for E there are situations where it requires division by 0 and the method above is then preferred.

The inverse radial Kepler equation is:

To obtain this result using Mathematica:

For most applications, the inverse problem can be computed numerically by finding the root of the function:

This can be done iteratively via Newton's method:

Note that E and M are in units of radians in this computation. This iteration is repeated until desired accuracy is obtained (e.g. when f(E) < desired accuracy). For most elliptical orbits an initial value of E0 = M(t) is sufficient. For orbits with e > 0.8, an initial value of E0 = π should be used.[9] A similar approach can be used for the hyperbolic form of Kepler's equation. In the case of a parabolic trajectory, Barker's equation is used.