Kilukkam (English: Jingle) is a 1991 Indian Malayalam-language musical romantic comedy film directed by Priyadarshan and written by Venu Nagavalli. The story set in Ooty revolves around tourist guide Joji (Mohanlal) and photographer Nishcal (Jagathy Sreekumar). They happen to meet a lavish tourist Nandini (Revathi), whom they bet their fortunes on. It also stars Thilakan, Innocent, K. B. Ganesh Kumar, Sukumari, and Sharat Saxena, with Murali and Jagadish making cameo appearances. The music was composed by S. P. Venkatesh.

Kilukkam was released on 15 August 1991. The film was the highest-grossing Malayalam film at that time, with gross over ₹5 crore for the first time in Malayalam film history; it ran for more than 365-days at the theaters. Kilukkam won five Kerala State Film Awards, including a Best Actor for Mohanlal, Second Best Actor for Jagathy Sreekumar, Best Editor for N. Gopalakrishnan, and Best Cinematographer for S. Kumar. The film is regarded as one of the best comedy films ever made in Malayalam cinema.

The film was remade in Telugu as Allari Pilla and in Hindi as Muskurahat by Priyadarshan himself. The film spawned a sequel, Kilukkam Kilukilukkam, released in 2006.

Joji (Mohanlal) is a tourist guide down on his luck. Nandini (Revathy), a tourist, with mental retardation, and a series of events make her presence in Ooty intertwined with the lives of Joji and his friend Nischal (Jagathy Sreekumar). In the early part of the movie, hilarity ensues in their misguided attempts in getting rid of Nandini. However, they find out that she is an escaped mental patient who has a bounty on her safe return. When they find that the bounty has been increasing for a while, they decide to hide her for a while and claim the bounty when it gets big enough. In time, they realize that things are not as they seem, and more complications are unraveled.

The initial plan for the film was set when Priyadarshan met "Goodknight" Mohan in an airport. The story was developed by Priyadarshan from a thought which came to his mind, about a mentally-ill mischievous girl who is saved by a poor guy. Priyadarshan employed Venu Nagavally to script for the film.[2] The film's title was chosen as Kilukkam, since the character of Nandini is introduced in the film with the clink of her anglets when she jump off a train and she is all perky like a kilukkampetti (a toy box that makes clinking sound).[3] The story of a girl who has to face some miseries in her life—it was the idea Priyadarshan initially intended for the film. While working on the story he met director Fazil and discussed about the idea. Fazil at the time was directing Ente Sooryaputhrikku (1991). He told Priyadarshan to "reverse think" the story of Ente Sooryaputhrikku, which was about a girl trying to find her mother. And in Kilukkam it became, a girl trying to find her father.[4]

Mohanlal, who is the usual choise of Priyadarshan was the protagonist in mind from the initial stage itself. Amala was signed for the role of Nandini. Priyadarshan initially chose Sreenivasan for the role of Nischal, but he was unavailable during his scheduled date due to another commitment. Hence, Priyadarshan opted for Jagathy Sreekumar, to whom he asked 30 days continuous dates. Sreekumar, at the time, busy acting in multiple films at a time, gave his continuous dates for a long period for the first time. The film's pooja function was held at Kothandapani Studio in Madras (now Chennai). The recording of songs started at the same day in the studio by S. P. Venkatesh. By the time of commencement of filming, due to some unknown reasons, Amala had to opt out from the film, and was replaced by Revathi. Jagadish played a pivotal character in the film as a still photographer, the professional rivalry of Nischal, but in the final cut of the film, for reducing the length, his portions were cut short to a minor role.[2] 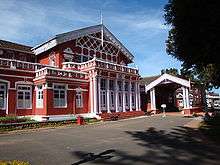 The Fernhills Palace in Ooty was a major location. It was shot as Justice Pillai's (Thilakan) bangalow.

Principal photography began in March 1991 in Ooty, which was the main location where the film is set. In Ooty, The Fernhills Palace was the central location, which was shot as the bungalow of Justice Pillai, played by Thilakan.[2] The mist is utilised in the film to the maximum. Major part of the filming took palace early in the morning, so that they could capitalise on the mist covered location; the mist only lasted for a couple of hours. One of the initial scenes in the film where Mohanlal and Thilakan are taking a morning walk, was shot in a secluded location in Ooty which was accidentally discovered by the team. They wanted to look the place as beautiful as some places in Europe, so they set a lamp posts, a couple of chairs and produced fallen leaves. They painted leaves and brought it to the location in a lorry and scattered it there to look like a natural foliage.[5]

While filming the song "Ootyppattanam" in Ooty, Mohanlal escaped from what would have been a fatal injury. A sequence in the song was shot over the top of a moving train, where Mohanlal was standing opposite to Sreekumar and Revathy. There was a leaning electric line over the train passage, which the production team did not notice. While performing, Sreekumar suddenly told Mohanlal to fall down, which he immediately did without questioning. The line just touched his hair.[6] In a later interview, Priyadarshan said that, he never laughed while filming Kilukkam, he believed that if they laugh in the sets, the audience will not get that laugh in theatres. Several unscripted dialogues were used by Mohanlal and Revathi in their combination scenes.[4]

Kilukkam was released on 15 August 1991, in 32 centres in Kerala. Within 50 days run, it grossed ₹1.59 crore from the releasing stations.[2] Kilukkam ran for over 365-days at many releasing centres and was the first Malayalam film to gross over ₹5 crore from theatrical revenue. Kilukkam was the highest-grossing film ever in Malayalam film history at the time.[1][7][8] The film is often regarded as a classic, it is considered as one of the best comedy films ever made in Malayalam cinema.[7][9][10]

In a later interview, Priyadarshan has said that, he exploited the Mohanlal – Sreekumar chemistry to the maximum and incorporated certain elements of emotions in the film unlike his earlier comedy films Aram + Aram = Kinnaram (1985) and Boeing Boeing (1985), which made the film one of the all time hits in Malayalam.[4]

The songs were composed by S. P. Venkatesh for the lyrics penned by Bichu Thirumala.[2][11]

In 2012, the executives of Ultra Rays 3D Technologies Private Ltd in Kochi approached Priyadarshan and Ram Mohan for talks for the 3D conversion of Kilukkam.[13] In that case, Kilukkam would become the first Malayalam film to be converted into 3D.[14] Priyadarshan confirmed the news that the company approached him but the final call should be made by the producer Ram Mohan. In the The Times of India report in late 2012, Mohan said that nothing has been finalised, discussions are going on.[15]