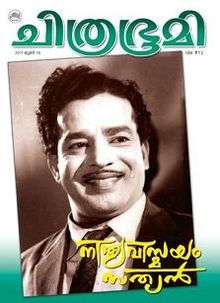 Chithrabhumi is the film magazine of Mathrubhumi group

Mathrubhumi (Malayalam: മാതൃഭൂമി) is a Malayalam language newspaper that is published from Kerala, India. Mathrubhumi was founded by K. P. Kesava Menon, an active volunteer in the Indian freedom struggle against the British. The word "Mathrubhumi" roughly translates to "mother land". It is the second most widely read newspaper daily in Kerala, after Malayala Manorama.[2] They also publish a variety of magazines and supplements including the prestigious weekly literary magazine, Mathrubhumi Azhchappathippu.[3]

Based in the northern Kerala town of Kozhikode, Mathrubhumi was founded in 1922 in the aftermath of Mahatma Gandhi's non-cooperation movement as a public limited company. This status makes it rare among newspapers, which tend to be closely held private companies owned by a single family.

K.P Kesava Menon, who was then Secretary of Kerala State Congress Committee, realized the urgent need for a pro-freedom movement publication from the Malabar region. And he, along with his confidants like K. Madhavan Nair, Kurur Neelakandan Namboodiripad, K. Kesavan Nair and P. Achuthan, resolved to register The Mathrubhumi Printing and Publishing Company Limited and the registration took place on 15 February 1922.

K. Madhavan Nair became the first managing director of the company. Madhavan Nair (1882-1933) was leading the freedom-struggle from Malabar and was a member of Madras Constituent Assembly.

The newspaper's founders were members of the Indian National Congress led by K. P. Kesava Menon (1886-1978); its shareholders included about 350 men and women of Kerala. Though Mathrubhumi lost money regularly in its early years, that did not matter, its historian noted in 1973, because its goals were not those of business but of social oppression and unrest. It battled gallantly with British authorities before independence and bitterly with Kerala's Communists from the late 1930s.Mathrubhumi's anti Western and anti American stand is still relevant at present day too.

By the 1940s, as Kerala's literate and politicised character forced itself to the attention of officials, the British acknowledged that Mathrubhumi, reaches every village in the district [of Malabar] and a mischievous attack of the police [in Mathrubhumi] is likely to do, a great deal of harm among the mass of the people who are able to read but not able to think for themselves. Mathrubhumi played important roles in many social reformation movements such as Vaikom Satyagraha and Guruvayur Satyagraha against untouchability. Participating in the Satyagraha, K.P. Kesava Menon was arrested and was sent to jail. Independence activists such as P. Ramanunni Nair, K. Kelappan, P. Narayanan Nair, C. H. Kunjappa, K. A. Damodara Menon, and A. P. Udhayabhanu have served as Chief Editors of the newspaper, and also Mathrubhumi has witnessed some of the very splendid Indian Civil Service officers as editors.

The bitter struggle between the Congress and the Communists in Kerala gave a Congress newspaper not only a reason for existence but a steady supply of electrifying stories for eager readers. The conduct of the newspaper remained with the old nationalists who had founded it and who comprised most of the shareholders, most of whom, it was said, had little idea where they had put their ancient share certificates. Commercial competition became noticeable after the formation of Kerala state in 1957. Mathrubhumi had been slow to join the Audit Bureau of Circulations, as its certificate No. 143 suggests.

A struggle began among the shareholders for control of the company. The 5,000 shares at Rs. 5 each, which had floated the newspaper in 1923, acquired undreamt- of value. By the 1990s, with control of the newspaper contested, they traded at thousands of rupees each. The struggle to control Mathrubhumi eventually reached the Supreme Court of India and illustrated the value of a newspaper and the way in which languages and local honour provide at least a hindrance to the acquisition of newspapers by 'outside' capitalists.

In 1993, Mathrubhumi's general manager - finance described the financial structure and compulsions of the company. When the newspaper was floated in the 1920s, 3,479 of the 5,000 shares were purchased at a nominal fee of Rs. 5 each by 352 different shareholders, 203 of whom bought only one share each. Even in the 1990s, no single person owned more than 225 shares. Mathrubhumi was a "public limited company in the true sense". Shareholders elect nine directors for two-year terms, one-third being elected each year.

The late 1970s brought two important changes. First, the old nationalists, who had run the newspaper as a kind of public trust, began to disappear. Second, the economic climate in India and in Kerala began to become more unapologetically capitalist. Mathrubhumi, which under its old regime was a Kerala institution and also an effectively run business, came to be seen as a valuable asset. Its control could provide wealth - and certainly provided influence and prestige. Shares in Mathrubhumi began to be traded in a way that was inconceivable 10 years earlier. Indeed, when the share book was tidied up in the mid-1980s, it was found that there were dozens of partly paid-up shares whose owners were long dead or unknown. Such shares were forfeited, making the remaining valid shares even more valuable.

A keen contest to control the company began, in which M. P. Veerendra Kumar, a wealthy planter and political aspirant, who held about 3% of the shares, emerged as the dominant shareholder and became the Managing Director. In the course of this struggle, M. D. Nalapat, another shareholder and editor from 1984–87, whose mother, the writer Kamala Das (Madhavikutty), also held shares, was forced off the board of directors. Nalapat then broke the rules as they had existed until that time: he sold his shares (at Rs. l2,500 each) not merely outside of Kerala but to India's wealthiest newspaper chain, Bennett, Coleman & Co., owners of The Times of India in Bombay. Nalapat and his supporters sold close to 20% of the shares in Mathrubhumi. Though this was scarcely a controlling interest, others saw the sale as the beginning of a Times of India takeover of a Kerala institution, and, according to Nalapat, an "innate sense of paranoia surfaced". The dominant shareholders appealed against the sale to the Kerala High Court which ruled that because The Times of India was a competitor of Mathrubhumi, the sale was invalid. Some saw the court's decision more as a response to Kerala sentiment than to the requirements of the law. The Times of India appealed to the Supreme Court of India where the case was still pending in the mid-1990s.

In 1932, the company entered Magazine Journalism with the launch of Mathrubhumi Azhchappathippu (Mathrubhumi Illustrated Weekly). It still remains one of the most read literary magazines in Kerala. In 1940, Viswaroopam, a comic magazine was launched with Sanjayan as the Chief Editor. Yugaprabhat, a bi-monthly in Hindi was also published whose editor was N. V. Krishna Warrier. But now, these two publications are not in print.

Mathrubhumi is one of the most circulated newspapers in Kerala, and is headquartered in Kozhikode. Inside Kerala, it is printed from Kozhikode, Thiruvananthapuram, Kottayam, Kochi, Thrissur, Kannur, Palakkad, Malappuram, Kollam and Alappuzha. Outside Kerala, it is published from Chennai, Bangalore, Mumbai, and New Delhi.Mathrubhumi is also printed from Dubai. It has a current readership of 94,44,000 as per the Indian Readership Survey 2009 (Round 1).

P. V. Chandran is the Managing Editor. M. Kesava Menon is the Editor of Mathrubhumi daily. M. V .Shreyams Kumar M.L.A. is the Director-Marketing and P. V. Nidhish is the Director-Editorial Administration. P. V. Ganagadharan, an industrialist of KTC Group and film producer, from Kozhikode; is a director in Mathrubhumi Board. K.K. Sreedharan Nair is the Editor-Periodicals.