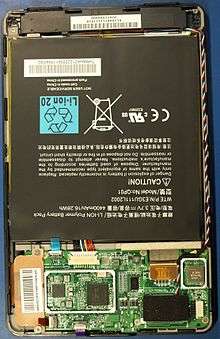 The Kindle Fire—which includes access to the Amazon Appstore, streaming movies and TV shows, and the Kindle Store for e-books—was released to consumers in the United States on November 15, 2011, after being announced on September 28.[9]

On September 7, 2012, upgrades to the device were announced with consumer availability to those European countries with a localized version of Amazon's website (United Kingdom,[10] France, Germany, Italy and Spain).[11]

As of October 2012, the Kindle Fire was the second best selling tablet after Apple's iPad, with about 7 million units sold according to estimates by Forrester Research[2] and as of 2013 Amazon's tablets were the fourth best selling.[18]

On September 6, 2012, the Kindle Fire was upgraded to the second generation, and its price was reduced to US$159, RAM upgraded to 1 GB and processor clock speed upgraded to 1.2 GHz. A more powerful and video-friendly version, the Kindle Fire HD (7 and 8.9 inch versions) was also made available, initially priced at $199 and $299.[19][20]

In September 2014, the Fire HDX 8.9 and the Fire HD were upgraded to the fourth generation of Fire tablets, removing the "Kindle" adjective in the naming scheme.[23] There was also the Fire HD 6 that has a six-inch screen with a quad-core processor priced at US$99.[24]

In September 2016, Amazon announced the release of the Fire HD 8 and a virtual assistant Alexa,[28] priced at US$89.99. "As with most of Amazon’s devices, the aim isn’t to make money off of the hardware but instead to sell digital content such as books, movies, and TV shows to users" reports Fortune.[29]

The Kindle Fire hardware was originally manufactured by Quanta Computer (an Original Design Manufacturer), which had also helped design the BlackBerry PlayBook, using it as a hardware template for the Kindle Fire.[30] First-generation Kindle Fire devices employed a 1-GHz Texas Instruments OMAP 4430 dual-core processor. The device has a 2-point multi-touch color LCD screen with a diagonal length of 7 inches (180 mm) and a 600×1024-pixel resolution (160 dpi density). Connectivity is through 802.11n Wi-Fi and USB 2.0 (Micro-B connector). The device includes 8 GB of internal storage—said to be enough for 80 applications, plus either 10 movies or 800 songs or 6,000 books.[31][32] According to Amazon the first-generation Kindle Fire's 4400 mAh battery sustains up to 8 hours of consecutive reading and up to 7.5 hours of video playback with wireless off;[33] later generations all offered around 7–8 hours[34]

Of the 8 GB internal storage available in the first-generation Kindle Fire, approximately 6.5 GB was available for content.[35]

The first-generation Kindle Fire has a sensor on the upper left-hand corner of the screen. This was widely considered to be an ambient-light sensor, disabled since an early software upgrade.[36]

Color display technologies consume much more power than monochrome electronic paper (E-ink) types; Fire offer a typical battery life of 8 hours of mixed usage, while monochrome Kindles offer 15 to 30 hours' use without WiFi—"battery lasts weeks on a single charge"—with a much lower-capacity battery.[37]

Because of Amazon's USB driver implementation, the first-generation Kindle Fire suffered from slow USB transfer speeds. For example, transferring an 800MB video file may have taken more than three minutes in 2011.[44]

It is possible to convert a Kindle Fire to a tablet running standard Android, with some loss of Amazon-related functionality, and lacking features such as Bluetooth, microphone, camera, and memory expansion.[45]

Analysts had projected the device to be a strong competitor to Apple's iPad,[12][46] and that other Android device makers would suffer lost sales.[47][48]

In a 2012 review published by Project Gutenberg, the Kindle Fire was called a "huge step back in freedom from the Kindle 3"; the reviewer noted that Amazon introduced a "deliberate limitation" into the Fire that didn't exist in the previous version: it is no longer possible to download free e-books from websites such as Project Gutenberg, Internet Archive and Google Books and have them stored permanently in the same places where books from Amazon are kept.[49]

Customers began receiving Kindle Fires on November 15, 2011, and in December 2012, customers had purchased over a million Kindle devices per week.[50] International Data Corporation (IDC) estimated that the Kindle Fire sold about 4.7 million units during the fourth quarter of 2011.[51]

The Amazon Kindle Fire helped the company beat their 2012 first quarter estimates and boosted the company's stock in extended trading.[52] As of May 2013, about 7 million units had been sold according to estimates.[2] Statistics for FY2014 or Q1&2 2015 are not yet available.