For the yacht, see Toshiba (yacht).

Toshiba was founded in 1938 as Tokyo Shibaura Electric K.K. through the merger of Shibaura Seisaku-sho (founded in 1875) and Tokyo Denki (founded in 1890). The company name was officially changed to Toshiba Corporation in 1978. Toshiba made a large number of corporate acquisitions during its history, including of Semp in 1977, of Westinghouse Electric LLC, a nuclear energy company in 2006,[3] of Landis+Gyr in 2011, and of IBM's point-of-sale business in 2012.

Toshiba is organised into four business groupings: the Digital Products Group, the Electronic Devices Group, the Home Appliances Group and the Social Infrastructure Group. It is listed on the Tokyo Stock Exchange, where it is a constituent of the Nikkei 225 and TOPIX indices, the Osaka Securities Exchange and the Nagoya Stock Exchange. Toshiba is the seventh largest semiconductor maker in the world by revenue. 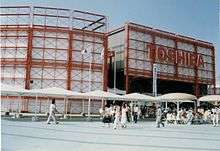 The Toshiba pavilion at Expo '85.

In 1987, Tocibai Machine, a subsidiary of Toshiba, was accused of illegally selling CNC milling machines used to produce very quiet submarine propellers to the Soviet Union in violation of the CoCom agreement, an international embargo on certain countries to COMECON countries. The Toshiba-Kongsberg scandal involved a subsidiary of Toshiba and the Norwegian company Kongsberg Vaapenfabrikk. The incident strained relations between the United States and Japan, and resulted in the arrest and prosecution of two senior executives, as well as the imposition of sanctions on the company by both countries.[6] Senator John Heinz of Pennsylvania said "What Toshiba and Kongsberg did was ransom the security of the United States for $517 million." 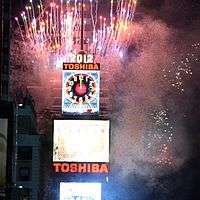 Toshiba as the current sponsor for the New Year's Eve festivities in Times Square.

In 2001, Toshiba signed a contract with Orion Electric, one of the world's largest OEM consumer video electronic makers and suppliers, to manufacture and supply finished consumer TV and video products for Toshiba to meet the increasing demand for the North American market. The contract ended in 2008, ending seven years of OEM production with Orion.

In December 2004, Toshiba quietly announced it would discontinue manufacturing traditional in-house cathode ray tube (CRT) televisions. In 2006, Toshiba terminated production of in-house plasma TVs. To ensure its future competitiveness in the flat-panel digital television and display market, Toshiba has made a considerable investment in a new kind of display technology called SED.

Before World War II, Toshiba was a member of the Mitsui Group zaibatsu (family-controlled vertical monopoly). Today Toshiba is a member of the Mitsui keiretsu (a set of companies with interlocking business relationships and shareholdings), and still has preferential arrangements with Mitsui Bank and the other members of the keiretsu. Membership in a keiretsu has traditionally meant loyalty, both corporate and private, to other members of the keiretsu or allied keiretsu. This loyalty can extend as far as the beer the employees consume, which in Toshiba's case is Asahi.

In July 2005, BNFL confirmed it planned to sell Westinghouse Electric Company, then estimated to be worth $1.8 billion (£1 billion).[9] The bid attracted interest from several companies including Toshiba, General Electric and Mitsubishi Heavy Industries and when the Financial Times reported on 23 January 2006 that Toshiba had won the bid, it valued the company's offer at $5 billion (£2.8 billion). The sale of Westinghouse by the Government of the United Kingdom surprised many industry experts, who questioned the wisdom of selling one of the world's largest producers of nuclear reactors shortly before the market for nuclear power was expected to grow substantially; China, the United States and the United Kingdom are all expected to invest heavily in nuclear power.[10] The acquisition of Westinghouse for $5.4 billion was completed on 17 October 2006, with Toshiba obtaining a 77 percent share, and partners The Shaw Group a 20 percent share and Ishikawajima-Harima Heavy Industries Co. Ltd. a 3 percent share.

In late 2007, Toshiba took over from Discover Card as the sponsor of the top-most screen of One Times Square in New York City.[11] It displays the iconic 60-second New Year's countdown on its screen, as well as messages, greetings, and advertisements for the company.

Toshiba announced on 16 May 2011, that it had agreed to acquire all of the shares of the Swiss-based advanced-power-meter maker Landis+Gyr for $2.3 billion.[14]

In April 2012, Toshiba agreed to acquire IBM's point-of-sale business for $850 million, making it the world's largest vendor of point-of-sale systems.[15][16]

In July 2012, Toshiba was accused of fixing the prices of LCD panels in the United States at a high level. While such claims were denied by Toshiba,[17] they have agreed to settle alongside several other manufacturers for a total of $571 million.[18]

In January 2014, Toshiba completed its acquisition of OCZ Storage Solutions.[19]

In October 2014, Toshiba and United Technologies agreed a deal to expand their joint venture outside Japan.[21]

Toshiba announced in early 2015 that they would stop making televisions in its own factories. From 2015 onward, Toshiba televisions will be made by Compal for the U.S., or by Vestel and other manufacturers for the European market.

In January 2016, Toshiba's security division unveiled a new bundle of services for schools that use its surveillance equipment. The program, which is intended for both K-12 and higher education, includes education discounts, alerts and post-warranty support, among other features, on its IP-based security gear.[22]

As of March 2016, Toshiba is preparing to start construction on a cutting-edge new semiconductor plant in Japan that will mass-produce chips based on the ultra-dense flash variant. Toshiba expects to spend approximately 360 billion yen, or $3.2 billion, on the project through May 2019.[23]

In April 2016, Toshiba recalled 100,000 faulty laptop lithium-ion batteries, which are made by Panasonic, that can overheat, posing burn and fire hazards to consumers, according to the U.S. Consumer PRoduct Safety Commission. Toshiba first announced the recall in January, and said it was recalling the batteries in certain Toshiba Notebook computers sold since June 2011.[24]

Toshiba announced in 2015 that it was investigating an accounting scandal.[26] Toshiba said that it might need to mark down profits for the previous three years.[27]

On 21 July 2015, CEO Hisao Tanaka announced his resignation amid an accounting scandal at the company that Tanaka called "the most damaging event for our brand in the company's 140-year history." Profits had been inflated by $1.2 billion over seven years.[28] Eight other senior officials also resigned, including the two previous CEOs.[29] Chairman Masashi Muromachi was appointed acting CEO.[30] Following the scandal, Toshiba Corp. was removed from a stock index showcasing Japan's best companies. That was the second reshuffle of the index, which picks companies with the best operating income, return on equity and market value.[31]

In September 2015, Toshiba sales fell to their lowest point in two and a half years. The firm said in a statement that its net losses for the quarterly period were 12.3 billion yen ($102m; £66m). The company noted poor performances in its televisions, home appliances and personal computer businesses.[32]

In December 2015, Muromachi said the episode had wiped about $8 billion off Toshiba's market value. He forecast a record 550 billion yen (about US $4.6 billion) annual loss and warned the company would have to overhaul its TV and computer businesses. Toshiba would not be raising funds for two years, he said. The next week, a company spokesperson announced Toshiba would in early 2016 seek 300 billion yen ($2.5 billion), taking the company's indebtedness to more than 1 trillion yen (about $8.3 billion).[33]

In May 2016, it was announced that Satoshi Tsunakawa, the former head of Toshiba's medical equipment division, was named CEO. This appointment came after the accounting scandal that occurred.[34][35]

The Toshiba research and development facility in Kawasaki, Kanagawa, Japan 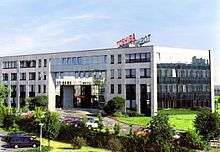 Toshiba is organised into four main business groupings: the Digital Products Group, the Electronic Devices Group, the Home Appliances Group and the Social Infrastructure Group.[36] In the year ended 31 March 2012, Toshiba had total revenues of ¥6,100.3 billion, of which 25.2 percent was generated by the Digital Products Group, 24.5 percent by the Electronic Devices Group, 8.7 percent by the Home Appliances Group, 36.6 percent by the Social Infrastructure Group and 5 percent by other activities. In the same year, 45 percent of Toshiba's sales were generated in Japan and 55 percent in the rest of the world.[36]

Toshiba is organized into the following principal business groupings, divisions and subsidiaries:

For more details on this topic, see HD DVD.

On 19 February 2008, Toshiba announced that it would be discontinuing its HD DVD storage format following defeat in a format 'war' against Blu-ray.[57] The HD DVD format had failed after most of the major US film studios backed the Blu-ray format, which was developed by Sony, Panasonic, Philips, Pioneer and Toshiba's President, Atsutoshi Nishida. "We concluded that a swift decision would be best [and] if we had continued, that would have created problems for consumers, and we simply had no chance to win".

Toshiba continued to supply retailers with machines until the end of March 2008, and continued to provide technical support to the estimated one million people worldwide who owned HD DVD players and recorders. Toshiba announced a new line of stand-alone Blu-ray players as well as drives for PCs and laptops, and subsequently joined the BDA, the industry body which oversees development of the Blu-ray format.[58]

REGZA (Real Expression Guaranteed by Amazing Architecture) is a unified television brand owned and manufactured by Toshiba. In 2010 REGZA name disappeared from the North American market, and from March 2015[59] new TVs carrying the Toshiba name are designed and produced by Compal Electronics, a Taiwanese company, which Toshiba has licensed its name to.

REGZA is also used in Android-based smartphones that were developed by Fujitsu Toshiba Mobile Communications.

In October 2014, Toshiba released the Chromebook 2, a new version with a thinner profile and a much-improved display. The Chromebook runs exclusively on the Chrome operating system and gives users free Google Drive storage and access to a collection of apps and extensions at the Chrome Web Store.[60]

In March 2015, Toshiba announced the development of the first 48-layer, three-dimensional flash memory. The new flash memory is based on a vertical stacking technology that Toshiba calls BiCS (Bit Cost Scaling), stores two bits of data per transistor and can store 128Gbits (16GB) per chip.[61]

Toshiba has been judged as making 'low' efforts to lessen their impact on the environment. In November 2012, they came second from the bottom in Greenpeace’s 18th edition of the Guide to Greener Electronics that ranks electronics companies according to their policies on products, energy and sustainable operations.[62] Toshiba received 2.3 of a possible 10 points, with the top company (WIPRO) receiving 7.1 points. 'Zero' scores were received in the categories 'Clean energy policy advocacy,' 'Use of recycled plastics in products' and 'Policy and practice on sustainable sourcing of fibres for paper.'

In 2010, Toshiba reported that all of its new LCD TVs comply with the Energy Star standards and 34 models exceed the requirements by 30% or more.[63]

Toshiba also partnered with China’s Tsinghua University in 2008 in order to form a research facility to focus on energy conservation and the environment.[64] The new Toshiba Energy and Environment Research Center is located in Beijing where forty students from the university will work to research electric power equipment and new technologies that will help stop the global warming process.[64] Through this partnership, Toshiba hopes to develop products that will better protect the environment and save China.[64] This contract between Tsinghua University and Toshiba originally began in October 2007 when they signed an agreement on joint energy and environment research.[64] The projects that they conduct work to reduce car pollution and to create power systems that don’t negatively affect the environment.[64]