King in the mountain

For other uses, see Mountain King.

A king in the mountain, king under the mountain, or sleeping hero is a prominent motif in folklore and mythology that is found in many folktales and legends. The Aarne-Thompson classification system for folktale motifs classifies these stories as number 766, relating them to the tale of the Seven Sleepers of Ephesus. 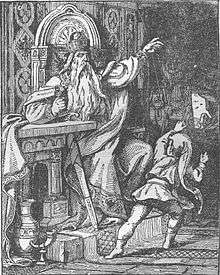 Frederick sends out the boy to see whether the ravens still fly.

King in the mountain stories involve legendary heroes, often accompanied by armed retainers, sleeping in remote dwellings, including caves on high mountaintops, remote islands, or supernatural worlds. The hero is frequently a historical figure of some military consequence in the history of the nation where the mountain is located.

The stories gathered by the Brothers Grimm concerning Frederick Barbarossa and Charlemagne are typical of the stories told, and have been influential on many told variants and subsequent adaptations. The presence of the hero is unsuspected, until some herdsman wanders into the cave, typically looking for a lost animal, and sees the hero. The stories almost always mention the detail that the hero has grown a long beard, indicative of the long time he has slept beneath the mountain.

The herdsman in this story was then supernaturally harmed by the experience: he ages rapidly, he emerges with his hair turned white, and often he dies after repeating the tale. The story goes on to say that the king sleeps in the mountain, awaiting a summons to arise with his knights and defend the nation in a time of deadly peril. The omen that presages his rising will be the extinction of the birds that trigger his awakening.[1][2]

A number of kings, rulers, fictional characters and religious figures have become attached to this story. They include the following: 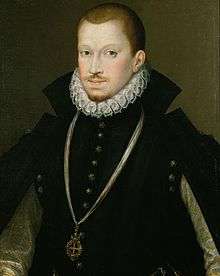 Sebastian I, with whose death the house of Aviz lost its throne. Sebastianists hold that he will return to rule Portugal's Fifth Empire. 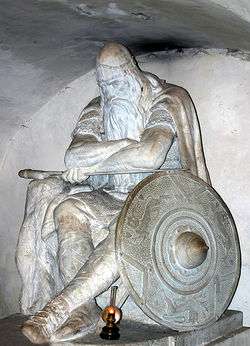 Sometimes this type of story or archetype is also attached to not-so-heroic figures, who are either simple anti-heroes or fully villains, whose return would mean the end of the world, or whose sleep represents something positive. This kind of archetype is known as the "Chained Satan" archetype.[17] Among examples of this are:

The sleeping hero in popular culture