For the film of the same name, see Koper (film).

Koper (Slovene pronunciation: [ˈkoːpəɾ]) (Italian: Capodistria) is a city in southwestern Slovenia, with the other Slovenian coastal towns Ankaran, Izola, Piran, and Portorož, situated along the country's 47-kilometre (29-mile) coastline, in the Istrian Region, approximately five kilometres (3.1 miles) from its border with Italy. Having a unique ecology and biodiversity, it is considered an important national natural resource.[2] The city's Port of Koper is the major contributor to the economy of the eponymous city municipality. With only one percent of Slovenia having a coastline, the influence that the Port of Koper also has on tourism was a factor in Ankaran deciding to leave the municipality in a referendum in 2011 to establish its own. The city is a destination on a number of Mediterranean cruising lines. In 2016, the city expects 65 cruise ship arrivals (for example: Norwegian Spirit, MSC Magnifica, Norwegian Jade, MS Rhapsody of the Seas...) with the season spanning from March to December.[3] Koper is the main urban centre of the Slovenian Istria, with a population of about 25,000.[1]

The city of Koper is officially bilingual, with both Slovene and Italian as official languages. Sights in Koper include the 15th-century Praetorian Palace and Loggia in Venetian Gothic style, the 12th-century Carmine Rotunda church, and the Cathedral of St Nazarius, with its 14th-century tower.

Koper is also one of the main road entry points into Slovenia from Italy, which lies to the north of the municipality. The main motorway crossing is at Spodnje Škofije to the north of the city of Koper. The motorway continues into Rabuiese and Trieste. Koper also has a rail connection with the capital city, Ljubljana. On the coast, there is a crossing at Lazaret into Lazaretto in Muggia municipality in Trieste province. The Italian border crossing is known as San Bartolomeo.

The Italian name of the city was anciently spelled as Capo d'Istria, and as such reported on maps and sources in other European languages. Modern names of the city include: Croatian: Kopar, Serbian: Копар, Kopar, German: Gafers.

The modifications of the environment around Koper since its beginning, showing the seashore prior to any land reclamation (red line) and the original island of Koper (light blue line on the left) and former island of Sermin on the right.

Koper rose from an ancient settlement built on an island in the southeastern part of the Gulf of Koper in the northern Adriatic. In Ancient Greek, the town was known as Aegida (Goat Town). Later it became known by the Latin names of Capris (Greek Copros), Caprea, Capre, or Caprista, from which the modern Slovenian name stems.

In 568, Roman citizens of nearby Tergeste (modern Trieste) fled to Capris due to an invasion of the Lombards. In honour of the Byzantine emperor Justinian II, the town was renamed Justinopolis. Later, Justinopolis was under both Lombard and Frankish rule and was briefly occupied by Avars in the 8th century.

Since the 8th century, possibly even since the 6th century, Koper was the seat of a diocese. One of Koper's bishops was the Lutheran reformer Pier Paolo Vergerio. In 1828, it was merged into the diocese of Trieste.

Trade between Koper and Venice has been recorded since 932. In the war between Venice and the Holy Roman Empire, Koper was on the German side, and as a result was awarded with town rights, granted in 1035 by Emperor Conrad II. After 1232, Koper was under the Patriarch of Aquileia, and in 1278 it joined the Republic of Venice. It was at this time that the city walls and towers were partly demolished.[4]

In 1420, the Patriarch of Aquileia ceded his remaining possessions in Istria to the Republic, consolidating Venetian power in Koper.[5]

Koper grew to become the capital of Venetian Istria and was renamed Caput Histriae 'head of Istria' (from which stems its modern Italian name, Capodistria).

The 16th century saw the population of Koper fall drastically, from its high of between 10,000 and 12,000 inhabitants, due to repeated plague epidemics.[6] When Trieste became a free port in 1719, Koper lost its monopoly on trade, and its importance diminished further.[7]

Assigned to Italy after World War I, at the end of World War II it was part of the Zone B of the Free Territory of Trieste, controlled by Yugoslavia. Most of the Italian inhabitants left the city by 1954, when the Free Territory of Trieste formally ceased to exist and Zone B became part of Socialist Federal Republic of Yugoslavia. In 1977, the Roman Catholic Diocese of Koper was separated from the Diocese of Trieste.

With Slovenian independence in 1991, Koper became the only commercial port in Slovenia. The University of Primorska is based in the city.

Koper's 15th-century Praetorian Palace is located on the city square. It was built from two older 13th-century houses that were connected by a loggia, rebuilt many times, and then finished as a Venetian Gothic palace. Today, it is home to the city of Koper’s tourist office.[8]

The city's Cathedral of the Assumption was built in the second half of the 12th century and has one of the oldest bells in Slovenia (from 1333), cast by Master Jakob in Venice. The upper terrace is periodically open and offers a great view of the Bay of Trieste. In the middle of it hangs the Sacra Conversatione painting from 1516, one of the best Renaissance paintings in Slovenia, made by Vittore Carpaccio.[9]

Koper has a humid subtropical climate (Cfa). There is a great deal of rainfall in Koper, even in the driest month. This climate is considered to be Cfa according to the Köppen-Geiger climate classification. The average temperature in Koper is 14.4 °C (57.9 °F). The average annual rainfall is 1,056 millimetres (42 in).

Italian was once the main language in the town, spoken by 92% of the population in 1900, but this number decreased sharply after Slovenian Istria was incorporated into Yugoslavia in 1954 and many ethnic Italians left the town. Today, Italian is mainly used as a second language by the Slovene-speaking majority.

According to the 2002 census,[10] this is the linguistic breakdown of the population:

The Port of Koper 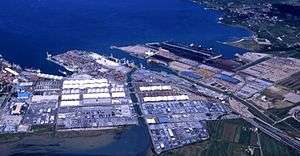 First established during the Roman Empire, the port of Koper has played an important role in the development of the area. It is among the largest in the region and is one of the most important transit routes for goods heading from Asia to central Europe. In contrast with other European ports, which are managed by port authorities, the activities of the Port of Koper comprise the management of the free zone area, the management of the port area, and the role of terminal operator.

Koper is twinned with: