i/ˈbɒzniən/ (bosanski/босански; [bɔ̌sanskiː]) is the standardized variety of Serbo-Croatian mainly used by Bosniaks.[4][5][6] Bosnian is one of the three official languages of Bosnia and Herzegovina,[7] along with Croatian and Serbian, and also an officially recognized minority or regional language in Serbia,[8] Montenegro,[9] and the Republic of Kosovo.[10]

Bosnian uses both Latin and Cyrillic alphabet,[Note 1] with Latin in everyday use.[11] It is notable among the varieties of Serbo-Croatian for a number of Arabic, Ottoman Turkish and Persian loanwords, largely due to the language's interaction with those cultures through Islamic ties.[12][13][14]

Bosnian is based on the most widespread dialect of Serbo-Croatian, Shtokavian, more specifically on Eastern Herzegovinian, which is also the basis of Croatian, Serbian, and Montenegrin. Until the dissolution of SFR Yugoslavia, they were treated as a unitary Serbo-Croatian language, and that term is still used in English to subsume the common base (vocabulary, grammar and syntax) of what are today officially four national standards, although this term is controversial for native speakers,[15] and paraphrases such as "Serbo-Croato-Bosnian" (SCB) or "Bosnian-Croatian-Serbian" (BCS) are therefore sometimes used instead, especially in diplomatic circles. 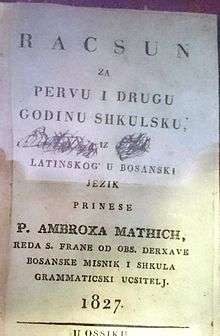 School book of Latin and Bosnian, 1827 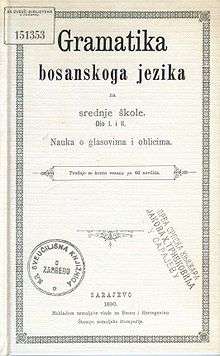 Although Bosnians are, on the level of colloquial idiom, linguistically more homogeneous than either Serbians or Croatians, unlike those nations they failed to codify a standard language in the 19th century, with at least two factors being decisive:

The literature of the so-called "Bosnian revival" at the start of the 20th century was written in an idiom that was closer to the Croatian standard than to the Serbian one: it was a western Shtokavian dialect with an Ijekavian accent and used a Latin script, but had recognizable Bosnian lexical traits. The main authors were the polymath, politician and poet Safvet-beg Bašagić and the storyteller Edhem Mulabdić.

The modern Bosnian standard took shape in the 1990s and 2000s. Lexically, Islamic-Oriental loanwords are becoming more frequent; phonetically: the phoneme /x/ (letter h) is reinstated in many words as a distinct feature of vernacular Bosniak speech and language tradition; also, there are some changes in grammar, morphology and orthography that reflect the Bosniak pre-World War I literary tradition, mainly that of the Bosniak renaissance at the beginning of the 20th century.

A cigarette warning "Smoking seriously harms you and others around you", ostensibly in three languages. The "Bosnian" and "Croatian" versions are identical and the "Serbian" is a transliteration of the same.

The name "Bosnian language" is a controversial issue for some Croats and Serbs, who also refer to it as the "Bosniak" language (Serbo-Croatian: bošnjački / бошњачки; [bǒʃɲaːtʃkiː]). Bosniak linguists however insist that the only legitimate name is "Bosnian" language (bosanski), and that that is the name that both Croats and Serbs should use. The controversy arises because the name "Bosnian" may seem to imply that it is the language of all Bosnians, while Bosnian Croats and Serbs reject that designation for their idioms.

The language is called Bosnian language in the 1995 Dayton Accords[17] and is concluded by observers to have received legitimacy and international recognition at the time.[18]

The International Organization for Standardization (ISO),[19] United States Board on Geographic Names (BGN), and the Permanent Committee on Geographical Names (PCGN) recognize the Bosnian language. Furthermore, the status of the Bosnian language is also recognized by bodies such as the United Nations, UNESCO, and translation and interpreting accreditation agencies,[20] including internet translation services.

Most English-speaking language encyclopaedias (Routledge, Glottolog,[21] Ethnologue,[22] etc.[23]) register the language solely as "Bosnian" language. The Library of Congress registered the language as "Bosnian" and gave it an ISO-number. The Slavic language institutes in English-speaking countries offer courses in "Bosnian" or "Bosnian/Croatian/Serbian" language, not in "Bosniak" language (e.g. Columbia,[24] Cornell,[25] Chicago,[26] Washington,[27] Kansas[28]). The same thing in German-speaking countries, where the language is taught under the name Bosnisch, not Bosniakisch (e.g. Vienna,[29] Graz,[30] Trier[31]) with very few exceptions.

Some Croatian linguists (Zvonko Kovač, Ivo Pranjković, Josip Silić) support the name "Bosnian" language, whereas others (Radoslav Katičić, Dalibor Brozović, Tomislav Ladan) hold that the term Bosnian language is the only one appropriate and that accordingly the terms Bosnian language and Bosniak language refer to two different things. The Croatian state institutions, such as the Central Bureau of Statistics, use both terms: "Bosniak" language was used in the 2001 census,[32] while the census in 2011 used the term "Bosnian" language.[33]

The majority of Serbian linguists hold that the term Bosniak language is the only one appropriate,[34] which was agreed as early as 1990.[35]

The constitution of Republika Srpska, the Serb-dominated entity within Bosnia and Herzegovina, did not recognize any language or ethnic group other than Serbian.[39] Bosniaks were mostly expelled from the territory controlled by the Serbs from 1992, but immediately after the war they demanded the restoration of their civil rights in those territories. The Bosnian Serbs refused to make reference to the Bosnian language in their constitution and as a result had constitutional amendments imposed by High Representative Wolfgang Petritsch. However, the constitution of Republika Srpska refers to it as the Language spoken by Bosniaks,[40] because the Serbs were required to recognise the language officially, but wished to avoid recognition of its name.[41]

Differences between Bosnian, Croatian and Serbian

The differences between the Bosnian, Serbian, and Croatian literary standards are minimal. Although Bosnian employs more Turkish, Persian, and Arabic loanwords—commonly called orientalisms—it is very similar to both Serbian and Croatian in its written and spoken form.[44]