Kutaisi (Georgian: ქუთაისი [kʰutʰɑisi]; ancient names: Aea/Aia, Kotais, Kutatisi, Kutaïsi) is the legislative capital of Georgia, and its third largest city. Situated 221 kilometres (137 miles) west of Tbilisi, it is the capital of the western region of Imereti.

Kutaisi is located along both banks of the Rioni River. The city lies at an elevation of 125–300 metres (410–984 feet) above sea level. To the east and northeast, Kutaisi is bounded by the Northern Imereti Foothills, to the north by the Samgurali Range, and to the west and the south by the Colchis Plain.

Kutaisi is surrounded by deciduous forests to the northeast and the northwest. The low-lying outskirts of the city have a largely agricultural landscape. The city centre has many gardens its streets are lined with high, leafy trees. In the springtime, when the snow starts to melt in the nearby mountains, the storming Rioni River in the middle of the city is heard far beyond its banks.

Average annual precipitation is around 1,530 mm (60.24 in). Rain may fall in every season of the year. The city often experiences heavy, wet snowfall (snowfall of 30 cm/12 inches or more per single snowstorm is not uncommon) in the winter, but the snow cover usually does not last for more than a week. Kutaisi experiences powerful easterly winds in the summer which descend from the nearby mountains. 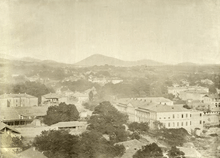 During the seventeenth century, Imeretian kings made many appeals to Russia to help them in their struggle for independence from the Ottomans. All these appeals were ignored as Russia did not want to spoil relations with Turkey. Only in the reign of Catherine the Great, in 1768, were troops of general Gottlieb Heinrich Totleben sent to join the forces of King Heraclius II of Georgia, who hoped to reconquer the Ottoman-held southern Georgian lands, with Russian help. Totleben helped King Solomon I of Imereti to recover his capital, Kutaisi, on August 6, 1770.

Finally, the Russian-Turkish wars ended in 1810 with the annexation of the Imeretian Kingdom by the Russian Empire. The city was the capital of the Gubernia of Kutaisi, which included much of west Georgia. In March 1879, the city was the site of a blood- libel trial that attracted attention all over Russia; the ten accused Jews were acquitted.[4]

Kutaisi was a major industrial center before Georgia's independence in 1991. Independence was followed by the economic collapse of the country, and, as a result, many inhabitants of Kutaisi have had to work abroad. Small-scale trade prevails among the rest of the population.

In 2011 Mikheil Saakashvili, the president of Georgia, signed a constitutional amendment relocating the parliament to Kutaisi.[5] On 26 May 2012, Saakashvili inaugurated the new Parliament building in Kutaisi. This was done in an effort to decentralise power and shift some political control closer to Abkhazia, although it has been criticised as marginalising the legislature, and also for the demolition of a Soviet War Memorial formerly at the new building's location.[6]

Kutaisi has an ancient cultural tradition. Here is a list of the cultural centers in Kutaisi. 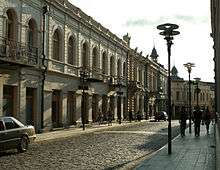 A street in central Kutaisi

Museums and other cultural institutions

Also all the republican newspapers, journals and television stations have their representatives in Kutaisi.

Kutaisi has a great tradition in sports, with many famous sport clubs. FC Torpedo Kutaisi has participated on the highest level of the Soviet Union football league. After Georgia achieved independence, it won many domestic and international titles. RC AIA Kutaisi won the Soviet Championship several times in rugby, and after independence, national championships and cups. Kutaisi also had an influential basketball club BC Kutaisi 2010.

The landmark of the city is the ruined Bagrati Cathedral, built by Bagrat III, king of Georgia, in the early 11th century. The Bagrati Cathedral, and the Gelati Monastery a few km east of the city, are UNESCO World Heritage Sites. One of the famous churches in Georgia is Motsameta Church. It is named after two saints, brothers David and Constantine. They were the Dukes of Margveti, and were martyred by Arab invaders in the 8th century. Besides the churches, there are many interesting places in Kutaisi, such as: Sataplia Cave, where one can observe footprints of dinosaurs; Geguti Palace, which was one of the residences of Georgian monarchs; "Okros Chardakhi" – Georgian Kings’ Palace; and the Pantheon, where many notable citizens are buried.

David the Builder Kutaisi International Airport (IATA: KUT, ICAO: UGKO) is an airport located 14 km (8.70 mi) west of Kutaisi. It is one of three international airports currently in operation in Georgia.

"Kutaisoba" is the most important holiday in Kutaisi. It is celebrated on the second of May. On this day the population of Kutaisi crowds into the central park, with their children and celebrate together. Some people make masks and there are many kinds of performances, so it is a lot of fun. Also little children sell chamomiles. It is an old tradition, in the past ladies collected money for poor people, so today children also collect money for them.

On this day one can see traditional Georgian dances and you can hear folk music. Also it is an old tradition to go in the forest, which is near Kutaisi. Families barbecue and play games. On this day, people wear traditional clothes, choxa, so you can imagine that you are in past times. Also there is a new tradition of writing lyrics which have been written by writers from Kutaisi and then airplanes throw them from the sky. There is also a competition in different kinds of martial arts.

Kutaisi is twinned with: