The kyaung has traditionally been the center of village life in Burma, serving as both the educational institution for children and a community center, especially for merit-making activities such as construction of buildings, offering of food to monks and celebration of Buddhist festivals, and observance of uposatha (Buddhist sabbath).

Monasteries are not established by members of the Sangha, but by laymen who donate land or money to support the establishment of a monastery. 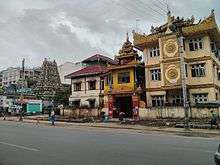 An urban kyaung on Anawrahta Road in Yangon.

The modern Burmese language term kyaung descends from the Old Burmese word kloṅ (က္လောင်).[3] The strong connection between religion and schooling is reflected by fact that the kyaung is the same word now used to refer to secular schools.[4] Kyaung is also used to describe Christian churches, Hindu temples, and Chinese temples. Mosques are an exception, as they use the Hindi-derived word bali (ဗလီ). 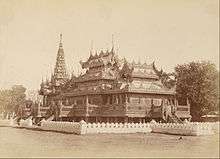 In pre-colonial times, the kyaung served as the primary source of education, providing nearly universal education for boys, representing the "bastion of civilization and knowledge" and "integral to the social fabric of pre-colonial Burma."[1][5] The connections between kyaungs and education were reinforced by monastic examinations, which were first instituted in 1648 by King Thalun during the Taungoo Dynasty.[6] Classical learning was transmitted through monasteries, which served as venues for Burmese students to pursue higher education and further social advancement in the royal administration after disrobing.[7] Indeed, nearly all prominent historical figures such as Kinwun Mingyi U Kaung spent their formative years studying at monasteries.

Traditional monastic education first developed in the Pagan Kingdom, in tandem with the proliferation of Theravada Buddhism learning in the 1100s.[5] The syllabus at kyaungs included the Burmese language, Pali grammar and Buddhist texts with a focus on discipline, morality and code of conduct (such as Mangala Sutta, Sigalovada Sutta, Dhammapada, and Jataka tales), prayers and elementary arithmetic.[1] Influential monasteries held vast libraries of manuscripts and texts.[7] The ubiquity of monastic education was attributed with the high literacy rate for Burmese Buddhist men.[8] The 1901 Census of India found that 60.3% of Burmese Buddhist men over twenty were literate, as compared to 10% for British India as a whole.[8]

Yaw Mingyi Monastery, a brick monastery in Mandalay modeled after a hotel in Southern Italy.

Following the abolishment of the Burmese monarchy at the end of the Third Anglo-Burmese War, monastic schools were largely superseded by secular, government-run schools.[5]

The typical kyaung consists of a number of buildings called kyaung zaung (ကျောင်းဆောင်):[11]

In pre-colonial times, royal monasteries were organized as complexes known as kyaung taik (ကျောင်းတိုက်), composed of several residential buildings, including the main building, the kyaunggyi (ကျောင်းကြီး) or kyaungma (ကျောင်းမ), which was occupied by the residing sayadaw, and smaller structures called kyaungyan (ကျောင်းရံ), which housed the sayadaw's disciples.[13] The complexes were walled compounds, and also housed a library, ordination halls, meeting halls, water reservoirs and wells, and utility buildings.[13]