Myanmar (Burma) is a multi-religious country. There is no official state religion, but the government shows preference for Theravada Buddhism, the majority religion.[2] According to both the 2014 census of the Burmese government Buddhism is the dominant religion, of 88% of the population, practiced especially by the Bamar, Rakhine, Shan, Mon, and Chinese ethnic groups. Bamar people also practice the Burmese folk religion under the name of Buddhism. The new constitution provides for the freedom of religion; however, it also grants broad exceptions that allow the regime to restrict these rights at will.[2] Ethnic minorities practice Christianity (6.2%, particularly the Chin, Kachin and Karen people) and Islam (4.3%, particularly the Rohingya but also Indians and other minorities).[1]

Nat worship is common in Myanmar. Nats are named spirits and shrines can be seen around the country, either standing alone, or as part of Buddhist temples. Nat worship has a relationship with Myanmar Buddhism and there is an recognised pantheon of 37 nats.

Hinduism is practiced mainly by Burmese Indians and constitutes 0.5% of the total population.[1] 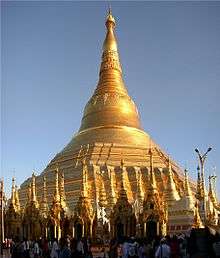 Shwedagon Pagoda in Yangon - the most revered pagoda in Myanmar

The Payathonzu Temple is built in the Mon style.

Buddhism in Myanmar is predominantly of the Theravada tradition, practised by 88% of the country's population.[1][3][4] It is the most religious Buddhist country in terms of the proportion of monks in the population and proportion of income spent on religion.[5]

Adherents are most likely found among the dominant ethnic Bamar, Shan, Rakhine, Mon, Karen, and Chinese who are well integrated into Burmese society. Monks, collectively known as the Sangha, are venerated members of Burmese society. Among many ethnic groups in Myanmar, including the Bamar and Shan, Theravada Buddhism is practised in conjunction with nat worship, which involves the placation of spirits who can intercede in worldly affairs.

Buddhists, although clearly professed by the majority of people in Myanmar, have their complaints regarding religious freedom. A political party, the Democratic Karen Buddhist Army, split from the main Karen nationalist movement, the Karen National Union (KNU), after the Buddhists were denied to rebuild and repair the stupas at Manerplaw. The top leadership of the KNU were also dominated by Christians, although roughly 65% of the Karen are Buddhist.

Many monks took part in the 2007 Saffron Revolution and were reportedly arrested by government security forces. Some of the leading monks are still detained in various prisons across the country.[6] 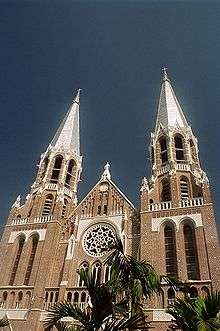 Christianity is practised by 6.2% of the population,[1][7] primarily among the Kachin, Chin and Karen people, and Eurasians because of missionary work in their respective areas. About four-fifths of the country’s Christians are Protestants, in particular Baptists of the Myanmar Baptist Convention; Roman Catholics make up the remainder. 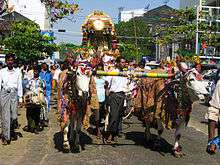 A Hindu procession in Yangon, Myanmar 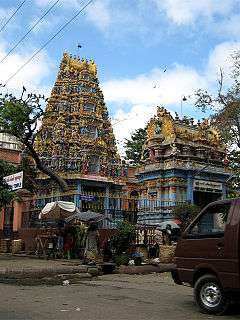 Hinduism is practised by 0.5% of the population.[1][8] Most Hindus in Myanmar are Burmese Indians.

Hinduism, along with Buddhism, arrived in Burma during ancient times. Both names of the country are rooted in Hinduism; Burma is the British colonial officials' phonetic equivalent for the first half of Brahma Desha the ancient name of the region.[9] Brahma is part of Hindu trinity, a deity with four heads. The name Myanmar is regional language[10] transliteration of Brahma, where b and m are interchangeable.[9]

Arakan (Rakhine) Yoma is a significant natural mountainous barrier between Burma and India, and the migration of Hinduism and Buddhism into Burma occurred slowly through Manipur and by South Asian seaborne traders. Hinduism greatly influenced the royal court of Burmese kings in pre-colonial times, as seen in the architecture of cities such as Bagan. Likewise, the Burmese language adopted many words from Sanskrit and Pali, many of which relate to religion. While ancient and medieval arrival of ideas and culture fusion transformed Burma over time, it is in 19th and 20th century that over a million Hindu workers were brought in by British colonial government to serve in plantations and mines. The British also felt that surrounding the European residential centre with Indian immigrants provided a buffer and a degree of security from tribal theft and raids. According to 1931 census, 55% of Rangoon's (Yangon) population were Indian migrants, mostly Hindus.[11] After independence from Britain, Burma Socialist Programme Party under Ne Win adopted xenophobic policies and expelled 300,000 Indian ethnic people (Hindus and Buddhists), along with 100,000 Chinese, from Burma between 1963 and 1967. The Indian policy of encouraging democratic protests in Burma increased persecution of Hindus, as well as led to Burmese retaliatory support of left-leaning rebel groups in northeastern states of India.[11] Since the 1990s, the opening of Burma and its greater economic engagement has led to general improvement in the acceptance of Hindus and other minority religions in Myanmar.

Aspects of Hinduism continue in Burma today, even in the majority Buddhist culture. For example, Thagyamin is worshipped whose origins are in the Hindu god Indra. Burmese literature has also been enriched by Hinduism, including the Burmese adaptation of the Ramayana, called Yama Zatdaw. Many Hindu gods are likewise worshipped by many Burmese people, such as Saraswati (known as Thuyathadi in Burmese), the goddess of knowledge, who is often worshipped before examinations; Shiva is called Paramizwa; Vishnu is called Withano, and others. Many of these ideas are part of thirty seven Nat or deities found in Burmese culture.[12]

In modern Myanmar, most Hindus are found in the urban centres of Yangon and Mandalay. Ancient Hindu temples are present in other parts of Burma, such as the 11th century Nathlaung Kyaung Temple dedicated to Vishnu in Bagan.

Although Burma's Jews once numbered in the thousands, there are currently only approximately twenty Jews in Yangon (Rangoon), where the country's only synagogue is. Most Jews left Myanmar at the commencement of the Second World War, and also after General Ne Win took over in 1962. 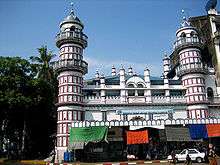 Islam, mainly of the Sunni group, is practised by 4.3% of the population according to the government census.[1]

Around 800,000 Muslim Rohingyas live in Burma with around 80% living in the western state of Rakhine. The Rohingyas have been fighting on and off since the 1940s to create an Islamic state in Western Burma.[14]

Their initial ambition during Mujahideen movements (1947-1961) was to separate the Rohingya-populated Mayu frontier region of Arakan from western Burma and annexe that region into newly formed neighbouring East Pakistan (present-day Bangladesh).[15]

In the 1970s, their uprisings appeared again during the period of the Bangladesh Liberation War in 1971. Recently, during the Arakan State Riots, the aspiration of the Rohingya militant groups, according to various media reports, is to create northern part of Arakan an independent or autonomous state.[16][17]

According to the US State Department’s 2009 international religious freedom report, the country's non-Buddhist populations were underestimated in the census. Islamic scholars claim the country's Muslim population at around 6 to 10% of the total populace.[18] Muslims are divided amongst Indians, Indo-Burmese, Persians, Arabs, Panthays and the Chinese Hui people.

Main articles: Rohingya rebellion in Western Myanmar and Freedom of religion in Myanmar

The Muslim populations are said to face religious persecution in Myanmar. Since independence, successive governments (both democratic and military) did not grant the citizenship of the Muslim Rohingya of Northern Rakhine (Arakan) and forbid missionary activities. The Rohingyas have been forced to flee to neighbouring Bangladesh or to Muslim states.

Their claim to citizenship has been marred by disputes with the ethnic Arakanese, who are mainly Buddhists. Aye Chan, a historian at the Kanda University, has written that as a consequence of acquiring arms from the British during World War II, Rohingyas tried to destroy the Arakanese villages instead of resisting the Japanese.[19] On 28 March 1942, Rohingya Muslims from Northern Rakhine State killed around 20,000 Arakanese. In return, around 5,000 Muslims in the Minbya and Mrohaung Townships were killed by Rakhine nationalists and Karenni.[20]

Many minority religions claim that they have a greater following than the official statistics but they also tend to over-represent the number of adherents.