Lake Rabun is a twisty 835-acre (3.4 km2) reservoir with 25 miles (40 km) of shoreline located in the Northeastern corner of the U.S. state of Georgia in Rabun County. It is the third lake in a six-lake series that follows the original course of the Tallulah River. The series begins with Lake Burton as the northernmost lake, followed by Lake Seed, Lake Rabun, Lake Tallulah Falls, Lake Tugalo, and Lake Yonah. Lake Rabun was built in a deep valley located along a 10-mile (16 km) section of the Tallulah River.

The lakes are owned and operated by the Georgia Power Company to generate hydroelectric energy for Georgia's largest city, Atlanta. At one time these lakes were the largest producers of electricity in the state of Georgia. Now, they only provide peak power supply.

Lake Rabun began filling in May 1915 with the completion of the Mathis Dam to form a reservoir of over ten million gallons covering 834 acres (3.4 km2) with a normal water level of 1,690 feet (515 m) above mean sea level. The property was purchased by the Georgia Railway and Power Company (later renamed Georgia Power Company). The Mathis Dam is an ambursen-type concrete dam with a height of 108 feet (33 m) and a span of 660 feet (201 m). The Terrora Hydroelectric Plant at Mathis Dam has a generation capacity of 16,000 kilowatts. The reservoir elevation is listed as 1,683 feet on topographic maps, but Georgia Power considers the lake full at an elevation of 1,689.6 feet (515.0 m).

Lake Rabun has a rich and unique Fourth of July celebration that is sponsored and coordinated by the Lake Rabun Association (LRA). Each year there is a wooden boat parade that follows the shore lines of the lake. Prizes are given to the most decorated boat and boat house. Another tradition is the Rabun Ramble Road Race, a 5K & 10K, that winds along the shores of the north side of the lake. The race is a marathon qualifier attracting both serious runners and families alike with over 800 participants each year. The race is a fundraiser event providing funds for the Lake Rabun Foundation that gives back to the local community. In the evening a spectacular fireworks display is given directly on the lake. Spectators watch the display from hundreds of boats crowded along the lower basin of the lake. 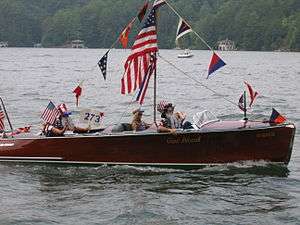 Every other year, the LRA conducts a tour of homes which is open to the public. The tour is designed to raise money for local scholarships and other worthy area causes. The LRA sells up to 600 tickets with the tour starting at the historic Hall's Boathouse Marina.

Due to the large growth of Atlanta in recent years, Lake Rabun has become a second home to some of the most wealthy and politically connected individuals in the state of Georgia. Although Lake Rabun has experienced a huge housing boom due to leased lots by the Georgia Power Company, most home owners are summer weekend residents. Due to the small size of the lake and strong home owners association, and powerful board members, the lake has resisted many attempts to further commercialize and potentially damage its quaint appeal.

Lake Rabun's county is very rainy, and is the wettest county in Georgia.