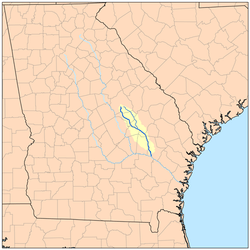 The Ohoopee River is a 119-mile-long (192 km)[1] river in east-central Georgia in the United States. It is a tributary of the Altamaha River, which flows to the Atlantic Ocean.

The Ohoopee River rises in Washington County, about 2 miles (3 km) south of Tennille, and flows generally southeastwardly, through or along the boundaries of Johnson, Emanuel, Treutlen, Candler, Toombs and Tattnall Counties. It joins the Altamaha River 13 miles (21 km) south of Reidsville.

In Emanuel County, it collects the Little Ohoopee River, about 54 miles (87 km) long,[1] which rises in Washington County and flows generally southeastwardly through Johnson and Emanuel Counties, past Kite.

The river valley has recently become the site of a yearly music festival known as "Curly Fest" featuring regional artists.