The Ochlockonee River (pronunciation: /oʊˈklɒknɪ/ o-KLOK-nee) is a fast running river originating in Georgia and flowing for 206 miles (332 km)[1] before terminating in Florida.

The Ochlockonee flows through the Red Hills, Talquin State Forest, Lake Talquin State Park and the Apalachicola National Forest, and past Ochlockonee River State Park, where it is tidally influenced and a mixture of fresh, brackish, and salt water,[2] on the way to its terminus in Ochlockonee Bay, which then empties into Apalachee Bay, with tidal influences extending upstream over 15 miles (24 km) from the river's mouth.[3]

Old Spanish documents sometimes refer to the Ochlockonee River as the Rio Agna and in other instances as the Rio de Lagna, while a map from 1683 shows it as the Rio Lana. The names Lagna and Lana may be Spanish renditions of the Muskogean word LAH'nee, which translates as "yellow". The rich yellows and reds of Red Hills clay give the river a yellowish color. Eighteenth century English maps give the name as Ogeelaganu or Ochloconee, which probably retains at least the flavor of its Hitchiti name. Variations of these continued into century with O-clock-ney being used in 1822 and Ockatockany in 1855.[4]

About 1840, Fort Stansbury was established on the river by placing a two story home that had been abandoned by its owner due to Seminole raids during the Second Seminole War. This fort was important in the forced removal of Indians from the area. Boats traveled upriver to collect and move Native Americans down to Gulf of Mexico ports for removal to "Indian Territories." By 1844, Fort Stansbury had been abandoned.[4]

From 1839 to 1842, Fort Virginia Braden was established on the river located at Fort Braden in Florida. The fort was named after the commander's wife who died of yellow fever. 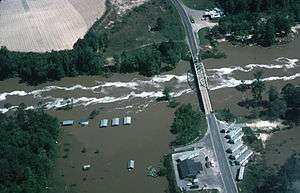 Aerial view of the Ochlockonee River in flood on April 16, 1975 near Bloxham, just southwest of the modern State Highway 20 bridge crossing and the Talquin Dam.

The Ochlockonee River corridor is home to many threatened fish, wildlife and plant species. It has been designated under the State of Florida's Outstanding Florida Waters program, and has been identified by the Florida Fish and Wildlife Conservation Commission as a Strategic Habitat Conservation Area.[5]

The Ochlockonee is connected to and a source of water for Lake Iamonia especially during flooding.

Fishing for bass, perch, bream and catfish can be excellent on the Ochlockonee River, and a state-designated canoe trail can be found both upstream and downstream of Lake Talquin. Telogia Creek and the Little River near State Road 12 are also popular for canoeing.[5] The Florida National Scenic Trail follows the river for two miles.[5]

The Ochlockonee is a vital link in the production of seafood to the southwest in Apalachicola Bay. During floods, the river transports organic matter downstream into the estuary of Ochlockonee Bay where the shallows of the bay were created by the great volume of sand and clay brought down by the river. This estuary serves as a nursery for numerous species of fish and shellfish which are the basis for recreational and commercial fishing as well as the Apalachicola seafood that this area is known for.

A number of major highways cross the Ochlockonee River along its course, including Interstate 10 and U.S. highways 19, 27, U.S. Route 84 and 98.