Lake Tana (also spelled T'ana, Amharic: ጣና ሐይቅ?, Ṭana Ḥäyq, T’ana Hāyk’; an older variant is Tsana, Ge'ez ጻና Ṣānā; sometimes called "Dembiya" after the region to the north of the lake) is the source of the Blue Nile and is the largest lake in Ethiopia. Located in Amhara Region in the north-western Ethiopian Highlands, the lake is approximately 84 kilometers long and 66 kilometers wide, with a maximum depth of 15 meters,[1] and an elevation of 1,788 meters.[2] Lake Tana is fed by the Lesser Abay, Reb and Gumara rivers; and its surface area ranges from 3,000 to 3,500 km,² depending on season and rainfall. The lake level has been regulated since the construction of the control weir where the lake discharges into the Blue Nile. This controls the flow to the Blue Nile Falls (Tis Abbai) and hydro-power station. 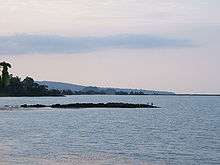 Lake Tana was formed by volcanic activity, blocking the course of inflowing rivers in the early Pleistocene times circa 5 million years ago.[3]

The lake was originally much larger than it is today. Seven large permanent rivers feed the lake as well as 40 small seasonal rivers. The main tributaries to the lake are Gilgel Abbay (Little Nile River), and the Megech, Gumara and Rib rivers.[3] 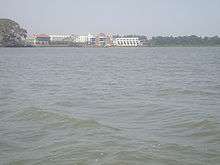 A resort hotel on Lake Tana in Bahir Dar.

Lake Tana has a number of islands, whose number varies depending on the level of the lake. It has fallen about 6 feet (1.8 m) in the last 400 years. According to Manoel de Almeida (a Portuguese missionary in the early 17th century), there were 21 islands, seven to eight of which had monasteries on them "formerly large, but now much diminished."[4] When James Bruce visited the area in the later 18th century, he noted that the locals counted 45 inhabited islands, but stated he believed that "the number may be about eleven."[4] A 20th-century geographer named 37 islands, of which he believed 19 have or had monasteries or churches on them.[4] 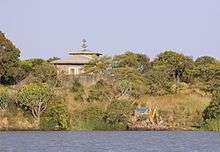 The Island Church on Lake Tana.

Remains of ancient Ethiopian emperors and treasures of the Ethiopian Church are kept in the isolated island monasteries (including Kebran Gabriel, Ura Kidane Mehret, Narga Selassie, Daga Estifanos, Medhane Alem of Rema, Kota Maryam and Mertola Maryam). On the island of Tana Qirqos is a rock shown to Paul B. Henze, on which he was told the Virgin Mary had rested on her journey back from Egypt; he was also told that Frumentius, who introduced Christianity to Ethiopia, is "allegedly buried on Tana Cherqos."[5] The body of Yekuno Amlak is interred in the monastery of St. Stephen on Daga Island. Emperors whose tombs are also on Daga include Dawit I, Zara Yaqob, Za Dengel and Fasilides. Other important islands in Lake Tana include Dek, Mitraha, Gelila Zakarias, Halimun and Briguida.

The monasteries are believed to have been built over earlier religious sites. They include the fourteenth-century Debre Maryam, and the eighteenth-century Narga Selassie, Tana Qirqos (said to have housed the Ark of the Covenant before it was moved to Axum), and Ura Kidane Mehret, known for its regalia. A ferry service links Bahir Dar with Gorgora via Dek Island and various lakeshore villages. 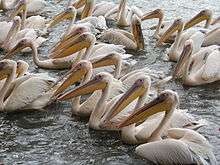 Since there are no inflows that link the lake to other large waterways and the main outflow, the Blue Nile, is obstructed by the Blue Nile Falls, the lake supports a highly distinctive fish fauna, which generally is related to species from the Nile Basin.[6] 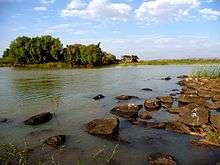 Beginning of the Blue Nile river by its outlet from Lake Tana.

About 70% of the fish species in the lake are endemic.[6] This includes one of only two known cyprinid species flocks (the other, from Lake Lanao in the Philippines, has been decimated by introduced species), which consists of fifteen relatively large, up to 1 m (3 ft 3 in) long, Labeobarbus barbs.[6][7] Eight of these are piscivorous and an important prey is the small Barbus tanapelagius, another endemic of the lake. (B. humilis and B. pleurogramma also occur in Lake Tana, but neither is endemic.)[7][8] Other noteworthy endemic species are Afronemacheilus abyssinicus, which is one of only two African stone loaches, and the tana subspecies of the Nile tilapia.[6]

Lake Tana supports a large fishing industry, mainly based on the Labeobarbus barbs (formerly in genus Barbus), Nile tilapia and sharptooth catfish (a large catfish that is widespread in Africa). According to the Ethiopian Department of Fisheries and Aquaculture, 1,454 tonnes of fish are landed each year at Bahir Dar, which the department estimates is 15% of its sustainable amount.[9]

Among other fauna, the lake supports relatively few invertebrates: There are fifteen species of molluscs, including one endemic, and also an endemic freshwater sponge.[6] Numerous wetland birds, such as the great white pelican and African darter, reside at Lake Tana. It is an important resting and feeding ground for many Palearctic migrant waterbirds.[6] There are no crocodiles, but the African softshell turtle has been recorded near the Blue Nile outflow from the lake.[10]