Amhara (Amharic: አማራ?) is one of the nine ethnic divisions (kililoch) of Ethiopia, containing the homeland of the Amhara people. Previously known as Region 3, its capital is Bahir Dar. Ethiopia's largest inland body of water, Lake Tana, which is the source of the Blue Nile river, is located within Amhara. The region also contains the Semien Mountains National Park, which includes Ras Dashan, the highest point in Ethiopia. Amhara is bordered by the state of Sudan to the west and northwest, and in other directions by other regions of Ethiopia: Tigray to the north, Afar to the east, Benishangul-Gumuz to the west and southwest, and Oromia to the south.

During Ethiopia's imperial era, Amhara included several provinces (such as Dembiya, Gojjam, Begemder, Angot, Wollo, Shewa and Lasta), most of which were ruled by native Ras or Negus. The Amhara Region then incorporated most of the former provinces of Begemder, Dembiya, Angot, Bete Amhara (Wollo), Gojjam and Shewa. When the Ethiopian People's Revolutionary Democratic Front (EPRDF) took over Ethiopia, most of the Amhara Region's fertile land was taken away and incorporated to other regions like the Tigray and Benishangul-Gumuz, and lately even to the neighboring Sudan. Especially, the re-designation of Wolkayit and Tsegede in Gondar as part of Tigray Region was rejected by its residents from the beginning.[3] This became one of the causes of the 2016 Ethiopian protests, the most violent crackdown against protesters in Sub-Saharan Africa since the Ethiopian regime killed at least 75 people during protests in the Oromia Region in November and December 2015.[4][5]

The Bahir Dar Airport in the Amhara Region.

According to the CSA, as of 2004, 28% of the total population had access to safe drinking water, of whom 19.89% were rural inhabitants and 91.8% were urban.[6] Values for other reported common indicators of the standard of living for Amhara as of 2005 include the following: 17.5% of the inhabitants fall into the lowest wealth quintile; adult literacy for men is 54% and for women 25.1%; and the Regional infant mortality rate is 94 infant deaths per 1,000 live births, which is greater than the nationwide average of 77; at least half of these deaths occurred in the infants’ first month of life.[7]

At 91.47% of the local population, the region is predominantly inhabited by people from the Semitic-speaking Amhara ethnic group. Most other residents hail from other Afro-Asiatic language communities, including the Agaw/Awi, Oromo, Agaw/Kamyr and Argobba. 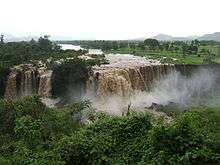 The Blue Nile in the Amhara Region.

The Amhara Region is the location of Laka Tana, the source of the Blue Nile, at Bahir Dar. The flow of the Blue Nile reaches maximum volume in the rainy season (from June to September), when it supplies about two-thirds of the water of the Nile proper. The Blue Nile, along with the Atbara River to the north, which also flows out of the Ethiopian Highlands, caused the annual Nile floods that contributed to the fertility of the Nile Valley. This supported the rise of ancient Egyptian civilization and Egyptian Mythology. With the completion in 1970 of the Aswan High Dam in Egypt, the Nile floods ended. Lake Tana has a number of islands, whose numbers vary depending on the level of the lake; it has fallen about 2 metres (6.6 ft) in the last 400 years. According to Manoel de Almeida (a Portuguese missionary in the early 17th century), there were 21 islands, seven to eight of which had monasteries on them "formerly large, but now much diminished."[10] When James Bruce visited the area in the later 18th century, he noted that the locals counted 45 inhabited islands, but wrote he believed that "the number may be about eleven."[10] A mid-twentieth century account identified 37 islands, of which 19 were said to have or have had monasteries or churches on them.[10] 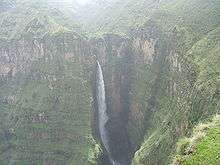 Waterfall in the Semien Mountains.

The lake islands were the home of ancient Ethiopian emperors. Treasures of the Ethiopian Church are kept in the isolated island monasteries (including Kebran Gabriel, Ura Kidane Mehret, Narga Selassie, Daga Estifanos, Medhane Alem of Rema, Kota Maryam and Mertola Maryam). The body of Yekuno Amlak is interred in the monastery of St. Stephen on Daga Island; other Emperors whose tombs are on Daga include Dawit I, Zara Yaqob, Za Dengel and Fasilides. Other important islands in Lake Tana include Dek, Mitraha, Gelila Zakarias, Halimun, and Briguida.

In the late 20th century, the scholar Paul B. Henze reported being shown a rock on the island of Tana Qirqos and being told it was where the Virgin Mary had rested during her journey back from Egypt. He was also told that Saint Frumentius, the bishop known for introducing Christianity to Ethiopia, was "allegedly buried on Tana Cherqos."[11] 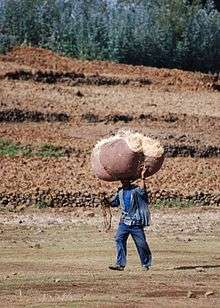 A farmer carrying hay from the fields to his home, Amhara

The Amhara Region contains Ethiopia's largest inland body of water, Lake Tana, which is the source of the Blue Nile river, and the highest point in Ethiopia, Ras Dashan (4,543 m) in the Semien Mountains. UNESCO has designated the Semien Mountains National Park as part of a World Heritage Site. The mountains consist of plateaux separated by valleys and pinnacles. Other notable heights include Mounts Biuat (4,437 m) and Abba Yared (4,460 m). Most of the Amhara Region is mountainous and is covered with large trees and forest.

Endemic species of fauna include the gelada baboon, the walia ibex and the Ethiopian wolf (or Simien fox). The wide range of altitudes has given the country a variety of ecologically distinct areas, leading to the evolution of endemic species in ecological isolation.

Like other Regions in Ethiopia, Amhara is subdivided into administrative zones.