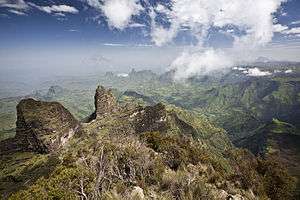 The Ethiopian Highlands is a rugged mass of mountains in Ethiopia, situated in the Horn region in Northeast Africa. It forms the largest continuous area of its altitude in the continent, with little of its surface falling below 1500 m (4,921 ft), while the summits reach heights of up to 4550 m (14,928 ft). It is sometimes called the Roof of Africa due to its height and large area.[1] Most of the Ethiopian Highlands are part of central and northern Ethiopia, and its northernmost portion reaches into Eritrea. 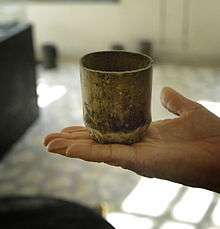 A coffee cup from the era of the Kaffa Kingdom

In the southern parts of the Ethiopian Highlands once was located the Kingdom of Kaffa, a medieval early modern state, whence the coffee plant was exported to the Arabian peninsula. The land of the former kingdom is mountainous with stretches of forest. The land is very fertile, capable of three harvests a year. The term "coffee" derives from the Arabic qahwah ( قهوة)[2] and is traced to Kaffa.[2][3] 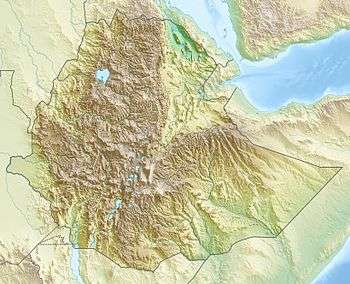 The southeastern portion's highest peaks are located in the Bale Zone of Ethiopia's Oromia Region. The Bale Mountains, also designated a national park, are nearly as high as those of Semien. The range includes peaks of over 4000 m. Among these are Mount Tullu Demtu (4337 m), which is the second-highest peak in Ethiopia, and Mount Batu (4307 m).

Dendi Caldera, a collapsed volcano in the mountain region

Around 30 million years ago, a flood basalt plateau began to form, piling layers upon layers of voluminous fissure-fed basaltic lava flows. Most of the flows were tholeiitic, save for a thin layer of alkali basalts and minor amounts of felsic (high-silica) volcanic rocks, such as rhyolite. In the waning stages of the flood basalt episode, large explosive caldera-forming eruptions also occurred.

The Ethiopian Highlands were eventually bisected by the Great Rift Valley as the African continental crust pulled apart. This rifting gave rise to large alkaline basalt shield volcanoes beginning about 30–31 million years ago.[4]

The predominant climate type of the Ethiopian Highlands is tropical monsoon, and have a climate which is generally considerably cooler than other regions at similar proximity to the Equator. 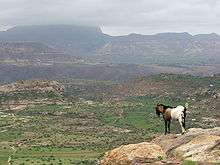 Ethiopian Highlands with Ras Dashan in the background

Because the highlands elevate Ethiopia, located close to the equator, this has resulted in giving this country an unexpectedly temperate climate. Further, these mountains catch the precipitation of the monsoon winds of the Indian Ocean, resulting in a rainy season that lasts from June until mid-September.[5] These heavy rains cause the Nile to flood in the summer, a phenomenon that puzzled the ancient Greeks, as the summer is the driest season in the Mediterranean climate that they knew.

The Ethiopian Highlands share a similar flora and fauna of other mountainous regions of Africa; this distinctive flora and fauna is known as Afromontane but from the time of the last Ice Age has been populated with some Eurasian (palearctic) flora. The habitats are somewhat different on either side of the Great Rift Valley that splits the highlands.

At lower elevations, the highlands are surrounded by tropical savannas and grasslands, including the Sahelian Acacia savanna to the northwest, the East Sudanian Savanna to the west, and the Somali Acacia-Commiphora bushlands and thickets to the northeast, east, south, and through the Rift Valley.

The highlands themselves are divided into three distinct ecoregions, distinguished by elevation. The Ethiopian montane forests lie between 1,100 and 1,800 meters elevation, above the lowland grasslands and savannas and extends to areas of similar habitat in Eritrea, Sudan, and Djibouti. This woodland belt has several natural plant communities, but has mostly been heavily grazed and converted to agricultural use now. Kolla, is an open woodland found at lower elevations, and dominated by species of Terminalia, Commiphora, Boswellia, and Acacia. Weyna dega is a woodland found in moister and higher locations, dominated by the conifers Afrocarpus gracilior and Juniperus procera. The lower portion of the Harenna Forest is a distinct woodland community, with an open canopy of Warburgia ugandensis, Croton macrostachyus, and Syzygium guineese, and Afrocarpus gracilior, with wild coffee (Coffea arabica) as the dominant understory shrub. The southwesterly winds bring rainfall from May to October with moisture from the Red Sea coming in from the east year round. Fauna at these elevations includes the endemic Harwood's francolin (Francolinus harwoodi), Prince Ruspoli's turaco (Tauraco ruspolii) and yellow-throated seedeater (Serinus flavigula), along with the Djibouti francolin (Francolinus ochropectus) in the Djibouti hills that are in the same general ecoregion.[6]

The Ethiopian montane grasslands and woodlands is the largest of the highland ecoregions, occupying the area between 1800 and 3000 meters elevations. The natural vegetation was closed-canopy forest in moister areas, and grassland, bushland, and thicket in drier areas. However these hillsides have good fertile soil and are heavily populated, largely by farming communities so most of the region has been converted to agriculture with a few areas of natural vegetation remaining. Urban areas in this ecoregion include: Ethiopia's capital city and Africa's fourth largest city Addis Ababa, the Amhara Region capital Bahir Dar with its island monasteries on Lake Tana, the old walled city of Harar, the spa town of Ambo, Asella in the Arsi Zone, the trekking center of Dodola, the lakeside Debre Zeyit, the largest city in the southwest Jimma, the market town of Nekemte, and the capital of the Tigray Region, Mek'ele. Awash National Park is a site for birdwatching.

Remaining woodland in the drier areas contains much endemic flora and primarily consists of Podocarpus conifers and Juniperus procera, often with Hagenia abyssinica. In the Harenna Forest, pockets of moist, closed-canopy forest with Pouteria and Olea are draped with lianas and epiphytes, while above 2400 metres, a shrubby zone is home to Hagenia, Schefflera, and giant lobelias (Lobelia gibberroa), species which can be found on the East African mountains further south. The evergreen broadleaved forest of the Semien Mountains, between 2,300 and 2,700 meters elevation, is dominated by Syzygium guineense, Juniperus procera, and Olea africana.

These slopes are home to a number of endemic reptiles, birds and animals including the endangered walia ibex (Capra walie) and the gelada baboon, whose thick fur allows it to thrive in the cooler climates of the mountains. These two species are only found on the northern side of the valley while another rare endemic the mountain nyala (Tragelaphus buxtoni) is restricted to the southern side, and now survives at higher altitudes than its original habitat as the lower slopes are heavily farmed. More widespread mammals found here include the mantled guereza (Colobus guereza), which is also threatened as its habitat disappears as is that of many other mammals of the highlands such as olive baboon (Papio anubis), Egyptian wolf (Canis aureus lupaster), African leopard (Panthera pardus pardus), Masai lion (Panthera leo nubica), spotted hyena (Crocuta crocuta), caracal (Caracal caracal), serval (Felis serval), common duiker (Sylvicapra grimmia) and red river hog (Potamochoerus porcus). Birds include Rueppell's chat, the finch Ankober serin (Serinus ankoberensis), white-winged flufftail (Sarothrura ayresi), and blue-winged goose. The farmland is home to many butterflies, especially Papilio, Charaxinae, Pieridae and Lycaenidae.

Above 3000 meters elevation lie the high Ethiopian montane moorlands, the largest afroalpine region in Africa. The montane moorlands lie above the tree line, and consist of grassland and moorland with abundant herbs and some shrubs that have adapted to the high mountain conditions. There are several endemic animal species one of which, the Ethiopian wolf (Canis simensis), is critically endangered. Other endemics include the big-headed mole-rat (Tachyoryctes macrocephalus) which is common on the Sanetti Plateau in the Bale Mountains. The mountain nyala finds its way up to the high moorlands although it is more common at lower elevations. Wintering birds include wigeon (Anas penelope), shoveler (Anas clypeata), ruff (Philomachus pugnax) and greenshank (Tringa nebularia).