For other uses, see Landsting (disambiguation). 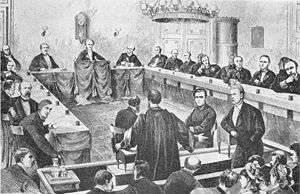 The Danish court of Impeachment, Rigsretten, during a session in the Landsting Chamber, Christiansborg Palace, 1877.

The Landsting was a house of the Rigsdag in Denmark from 1849 until 1953, when the bicameral system was abolished. The house had powers equal to the Folketing, which made the two houses of parliament hard to distinguish.

Originally membership and the electorate was restricted, and the members were largely conservatives. Membership of the house was then restricted to certain sectors of society: only males with a certain net worth could hold a seat. In 1915, these restrictions were removed, and a few new members were appointed by the existing members.

Under the Constitution of 1849, the requirements for the right to vote was the same for the two houses, however the requirements for electability was stricter for the Landsting; candidates were limited to those of age 40 and above and they were required to have a substantial income.[1] The house originally had 51 members, all elected indirectly.[2] The voters elected a group of electors for each constituency, and the electors elected the members of the house. The members were elected for a term of eight years; however, half of the seats were up for election every four years.

With the Constitution of 1866, the electoral system was reformed. The number of seats was increased to 66 of which twelve were appointed by the king for a period of twelve years, and one by the Faroese Løgting.[3] The remaining 53 were elected indirectly. In Copenhagen, half the electors were elected by the voters paying the largest amount of tax, the other half by all the voters. In the rest of the country, one elector was elected by the voters in each parish in the country and half as many electors were elected in the market town by the same system as in Copenhagen. Then for each elector elected in the country parishes and the market towns, one elector was found among those that paid the greatest amount of tax in the country parishes.[4] As the main direct tax of the time was based on real estate and its value as farmland, this system greatly favored manor owners. The result was a conservative majority lasting 35 years, until the 1902 election.[3]

The next reform of the electoral system came with the Constitution of 1915, and the first election under this system was the 1918 election. Women were given the right to vote, the number of seats was increased to 72, the number of constituencies was reduced to seven, and the system of appointed members was replaced by 18 members elected by the resigning Landsting for a period of eight years.[5][6]

Although a 1939 referendum that would have replaced the Landsting with another chamber—the Rigsting—and simplified the legislative process, failed due to a low voter turnout, the bicameral system and thereby the Landsting was abolished in a 1953 referendum.

Etymology and earlier use

Ting (old Norse: þing) means assembly. It first came into being during Viking times and was formed by the freemen of the community. In those times it numbered a hundred men. Tings were necessary in the clan society of Northern Germany and Scandinavia. Inter-clan wars were resolved or prevented through the governance of the ting. It also served as the place for religious rites and trade negotiations.