The Constitutional Act of Denmark (Danish: Danmarks Riges Grundlov), or simply the Constitution (Danish: Grundloven), forms a part of the supreme law of Kingdom of Denmark, applying equally in Denmark, Greenland and the Faroe Islands. It lays down the framework defining fundamental political principles of governance and establishes the structure, procedures, powers and duties of government institutions. Later sections set out fundamental rights and the duties of citizens, such as freedom of speech, freedom of religion and compulsory military service.

The Kingdom is governed on the basis of this Constitutional Act but it is complemented by Royal Law (Kongeloven), the Act of Succession (Tronfølgeloven) and devolution arrangements in Greenland and the Faroe Islands.

The Danish Parliament (Folketinget) cannot make any laws which may be repugnant or contrary to the Constitutional Act. However, Denmark has no constitutional court, and establishing such a court would require a constitutional amendment. Changes to the Act must be confirmed by a majority in two consecutive parliamentary terms and the approval of the electorate through a national referendum.[4] 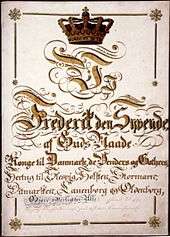 The Danish Constitutional Act of 1849

The Danish Constitution differs from all other Danish laws by virtue of its superseding status. As such, these laws are not permitted to contravene the provisions of the Constitution Act.

The main principle of the Constitutional Act was to limit the King's power (section 2).[1] It creates a comparatively weak constitutional monarch who is dependent on Ministers for advice and Parliament to draft and pass legislation. The Constitution of 1849 established a bicameral parliament, the Rigsdag, consisting of the Landsting and the Folketing. The most significant change in the Constitution of 1953 was the abolishment of the Landsting, leaving the unicameral Folketing. It also enshrined fundamental civil rights, which remain in the current constitution: such as habeas corpus (section 71), private property rights (section 72) and freedom of speech (section 77).[1]

The Constitutional Act has been changed (replaced) very few times, but always with the consent of Danish citizens.[3] The wording in the Act is so general that it can still be applied today, despite major changes in society and political life in the intervening years. However, since Denmark lacks a Constitutional Court, scrutiny of legislation for compatibility with the Constitution is a matter for ordinary courts, ultimately the Supreme Court. Significantly this means that the actual testing of compatibility can only be instigated by a citizen or company who is affected by the question.[5]

Symbolic status of the king

When reading the Danish Constitution, it is important to bear in mind that the King is meant to be read as the government because of the monarch's symbolic status. This is a consequence of sections 12 and 13, by which the King executes his power through his ministers, who are responsible for governing. An implication of these sections is that the monarch cannot act alone in disregard of the ministers, so the Danish monarch does not interfere in politics.[6]

As in many other democracies, the Danish Constitutional Act divides power into three independent branches—the legislative, the executive and the judicial branches—in order to encourage checks and balances and prevent abuse of power.[3] The Danish Parliament is the legislative power, enacting the laws of the country. The Cabinet (Government) is the executive power, formally acting out the role of the Monarch,[1] by ensuring that laws are implemented. The Supreme Court and lower courts of law are the judicial power, pronouncing judgements in disputes between citizens and between the authorities and citizens.

The Constitution is heavily influenced by the French philosopher Montesquieu, whose separation of powers was aimed at achieving mutual monitoring of each of the branches of government. However, the division between legislative and executive power in Denmark is not as sharp as in the United States.

In several sections the Constitutional Act sets out the powers and duties of the Danish Parliament. Section 15 in the Act, which deals with the parliamentary principle, lays down that "a Minister shall not remain in office after the Parliament has passed a vote of no confidence in him".[1] This suggests that Ministers are accountable to Parliament and even subservient to it. The Cabinet exerts executive power through its Ministers, but cannot remain in office if the majority of the Folketing goes against it. Another important feature of the Danish parliamentary system is that the Constitutional Act lays down that "the Members of the Folketing shall be elected for a period of four years", but still, "the King may at any time issue writs for a new election".[3] 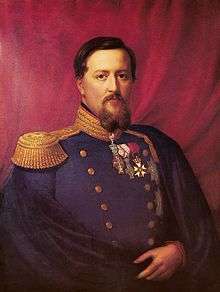 Frederick VII, the last king of Denmark to rule as an absolute monarch.

The first modern constitution of Denmark was signed on 5 June 1849 by King Frederick VII. The event marked the country's transition to constitutional monarchy, replacing the old constitution like Lex Regia from 1665 which had introduced absolute monarchy in Denmark. The Constitution has been rewritten four times since 1849, largely building upon the original text.

Before the first constitutions, the power of the king was tempered by a håndfæstning, a charter each king had to sign before being accepted as king by the land things. This tradition was abandoned in 1665 when Denmark got its first constitution Lex Regia (The Law of The King, Danish: Kongeloven) establishing absolute power for King Frederick III of Denmark, and replacing the old feudal system. This is Europe's only formal absolutist constitution.[7] Absolute power was passed along with a succession of Danish monarchs until Frederick VII, who agreed to sign the new constitution into law on 5 June 1849, which has since been a Danish national holiday.

Frederick VII's immediate predecessor, his father Christian VIII, ruled Denmark from 1839 to 1848, and had been king of Norway until the political turmoil of 1814 forced him to abdicate after a constitutional convention. Liberal forces who supported similar constitutional reforms in Denmark were disappointed by his refusal to acknowledge any limitations to his inherited absolute power, and had to wait for his successor to put through the reforms.

The government's draft was laid before the Constitutional Assembly of the Realm (Den Grundlovgivende Rigsforsamling), part of which had been elected on 5 October 1848, the remainder having been appointed by the King. The 152 members were mostly interested in the political aspects, the laws governing elections and the composition of the two chambers of Parliament. The Constitution was adopted during a period of strong national unity, namely the First Schleswig War, which lasted from 1848–1851.[8]

According to section 88 of the 1953 Constitution, changes require a majority in two consecutive Parliaments: before and after a general election. In addition, the Constitution must pass a popular vote, with the additional demand that at least 40% of voting age population must vote in favour.[1] The Constitution sets out only the basic principles, with more detailed regulation left over to the Danish Parliament. 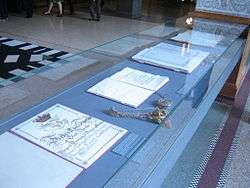 The Constitutions of Denmark located inside Folketinget.

The four changes can be summarised as follows:

The conservative Højre had pressed for a new constitution, giving the upper chamber of parliament more power, making it more exclusive and switching power to the conservatives from the original long standing dominance of the National liberals, who lost influence and was later disbanded. This long period of dominance of the Højre party under the leadership of Jacob Brønnum Scavenius Estrup with the backing of the king Christian IX of Denmark was named the provisorietid (provisional period) because the government was based on provisional laws instead of parliamentary decisions. This also gave rise to a conflict with the Liberals (farm owners) at that time and now known as Venstre (Left). This constitutional battle concluded in 1901 with the so-called systemskifte (change of system) with the liberals as victors. At this point the king and Højre finally accepted parliamentarism as the ruling principle of Danish political life. This principle was not codified until the 1953 constitution.

Further information: Freedom of speech and freedom of the press in Denmark

Personal liberty shall be inviolable. No Danish subject shall in any manner whatever be deprived of his liberty because of his political or religious convictions or because of his descent.

The Constitution of Denmark outlines fundamental rights in sections 71–80. Several of these are of only limited scope and thus serve as a sort of lower bar. The European Convention on Human Rights was introduced in Denmark by law on 29 April 1992 and supplements the mentioned paragraphs. Freedom of speech and freedom of the press in Denmark are ensured by section 77 of the Constitution.

Section 4 establishes that the Evangelical Lutheran Church is "the people's church" (folkekirken), and as such is supported by the state. Freedom of religion is granted in section 67, and official discrimination based on faith is forbidden in section 70.

Section 20 of the current constitution establishes that specified parts of national sovereignty can be delegated to international authorities if the Parliament or the electorate votes for it. This section has been debated heavily in connection with Denmark's membership of the European Union (EU), as critics hold that changing governments have violated the Constitution by surrendering too much power.

In 1996, Prime Minister Poul Nyrup Rasmussen was sued by twelve Eurosceptics for violating this section. The Supreme Court acquitted Rasmussen (and thereby earlier governments dating back to 1972) but reaffirmed that there are limits to how much sovereignty can be surrendered. In 2011, Prime Ministers Lars Løkke Rasmussen faced a similar challenge when he was sued by twenty-eight citizens for having adopted the European Lisbon Treaty without a referendum. The group of professors, actors, writers and Eurosceptic politicians argued that the Lisbon Treaty hands over parts of national sovereignty to the EU and therefore a referendum should have taken place.[12] The case was later dismissed.

Greenland and the Faroe Islands

Section 32 states "special rules may be provided by Statute for the commencement and determination of Faroe Islands and Greenland representation in the Parliament."[1] This section refers to home rule in both territories. The specific arrangements for the transfer of powers and monetary competency to Greenland and the Faroe Islands are contained in separate statues, with equal constitutional status (see below).

Other constitutional laws of Denmark