This article is about the person in some South Asian religions. For other uses, see Rishi (disambiguation).

Rishi Vishwamitra In above image, Menaka trying to win him over from an aloof ascetic life to a householder life.

In the Vedas the term Rishi (Sanskrit: ऋषि ṛṣi) denotes an inspired poet of Vedic hymns. Post-Vedic tradition of Hinduism regards the Rishis (or Ruesi in Laos and Thailand) as "seers" or "sages", who after intense meditation (Tapas) realized truths and eternal knowledge, which they composed into hymns. [1]

According to Indian tradition, the word may be derived from two different meanings of the root 'rsh'. Sanskrit grammarians[2] derive this word from the second meaning: "to go, to move".[3] V. S. Apte[4] gives this particular meaning and derivation, and Monier-Williams[5] also gives the same, with some qualification.

Another form of this root means "to flow, to move near by flowing". (All the meanings and derivations cited above are based upon Sanskrit English Dictionary of Monier-Williams).[5] Monier-Williams also quotes Tārānātha who compiled the great (Sanskrit-to-Sanskrit) dictionary named "ṛṣati jñānena saṃsāra-pāram" (i.e., "one who reaches beyond this mundane world by means of spiritual knowledge").

More than a century ago, Monier-Williams tentatively suggested a derivation from drś "to see".[6] Monier-Wiliams also quotes the Hibernian (Irish) form arsan (a sage, a man old in wisdom) and arrach (old, ancient, aged) as related to rishi. Monier-Williams also conjectures that the root drish (to see) might have given rise to an obsolete root rish meaning "to see".

However, the root has a close Avestan cognate ərəšiš[7] "an ecstatic" (see also Yurodivy, Vates). Yet the Indo-European dictionary of Julius Pokorny connects the word to a PIE root *h3er-s meaning "rise, protrude", in the sense of "excellent" and thus cognate with Ṛta and right and Asha. In Sanskrit, forms of the root rish become arsh- in many words, (e.g., arsh)

Modern etymological explanations such as by Manfred Mayrhofer in his Etymological Dictionary[8] leave the case open, and do not prefer a connection to ṛṣ "pour, flow" (PIE *h1ers), rather one with German rasen "to be ecstatic, be in a different state of mind" (and perhaps Lithuanian aršus).

Some of the earliest lists of Rishi are found in Jaiminiya Brahmana verse 2.218 and Brihadaranyaka Upanishad verse 2.2.6.[9]

"Seer" of the Vedas 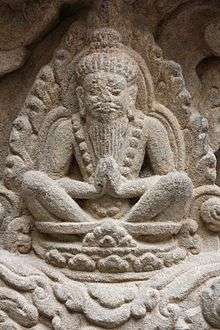 A temple relief showing a Rishi.

In the Vedas, the word denotes an inspired poet of Vedic hymns.[1] In particular, Ṛṣi refers to the authors of the hymns of the Rigveda.

In Mahabharata 12, on the other hand, there is the post-Vedic list of Marici, Atri, Angiras, Pulaha, Kratu, Pulastya and Vashista. The Mahābhārata list explicitly refers to the saptarshis of the first manvantara[5] and not to those of the present manvantara. Each manvantara had a unique set of saptarshi. In Harivamsha 417ff, the names of the Rishis of each manvantara are enumerated.

In addition to the Saptarṣi, there are other classifications of sages. In descending order of precedence, they are Brahmarshi, Maharshi, Rajarshi. Devarṣi, Paramrṣi, Shrutarṣi and Kāndarṣi are added in Manusmriti iv-94 and xi-236 and in two dramas of Kālidasa.

Rishi in Indonesia and khmer temples

Most medieval era Hindu temples of Java, Indonesia show Rishi Agastya statues or reliefs, usually guarding the southern side of Shaivite temples.[9] Some examples include Candi Sambisari and the Prambanan temple near Yogyakarta.[12] Rishi Agastya is known as Phra Reusi Akkhot in Thailand.[9]

Ruesi in Cambodia, Thailand and Laos 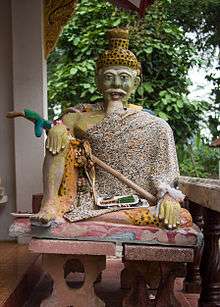 A statue of a Ruesi at Wat Suan Tan in Nan, Thailand

Ruesi (Sanskrit: ṛṣi, Thai: ฤๅษี) is a hermit sage, the equivalent of Rishi in India. He is a figure of many legends and stories of the Lao and Thai folklore.[13] The Ruesi are Hermit sages who spend their time meditating and developing psychic powers and collecting magical herbs, minerals, rarities and other substances. They use the magical ingredients to make special love charms, spells and protective amulets. They wish to help other beings to be happier in life, and do this by telling fortunes, making rituals and spells to reduce bad karma, chase evil influences and spirits away, protect from ones enemies, or even increase one’s luck and wealth with a spell for wealth and good fortune. Some Rishi wear a reddish-brown robe, whereas some even wear white like the Prahm. Some wear white and devote themselves exclusively to healing medical ailments. This kind of Ruesi is known as Chiwok, named after the Rishi Chivaka who was the official doctor of the Lord Buddha. A Chiwok Ruesi would collect herbs minerals and healing substances for making his healing potions. This kind of Ruesi can perhaps be compared to the druid bards who were also healers, using herbal potions and ointments. A Chiwok Ruesi will also be expert in orthopedic massage, and other matters, such as Horoscope.

Of the types of Ruesi who make Sak Yant, most will be of the Dabos variety, such as Ajarn Thoy Dabos (there are many other subcategories of Ruesi within the main variety who wear reddish robes). The Dabos will sometimes also wear a tiger skin over his red robe, because of the tiger skin worn by Lord Shiva, who was and is the original Maha Ruesi (great Ruesi). A Dabos Ruesi will normally have at least one Ruesi mask of the Thai Deity “Ruesi Por Gae Dta Fai” on his altar.

Ruesi masks are called "Siarn Ruesi" is a life sized mask and head dress of an ancient hermit sage (perhaps the Western comparison might be “wizard”). The mask has an open mouth with two big buck teeth sticking out, a beard and long moustache and three eyes. The third eye is located in the centre of the forehead. Ruesi Por Gae is seen as the “Kroo” (master teacher) of all Samnak Sak Yant. The Kroo protects you as a devotee of the lineage of his teachings. Most devotees will receive the Yant Kroo as their first tattoo, this is the bonding process between the devotee and the lineage of Por Gae down from the legendary ancient Ruesi himself right up to his current lineage of Ajarn Sak Yant who have learned his teachings in the lineage from mouth to ear. Some Ruesi (and Prahm) Masters will even become a “Rang Song” (spirit medium) for Por Gae or another spirit Deity to enter them whilst receiving devotees and administering Sak Yant and other magical services. In this case the master will let the Deity use his body to manifest his mind onto this plane and then perform the tattooing or ceremonies directly. In this case, many Ruesi (such as the Ruesi Ajarn Thoy Dabos Por Gae Dta Fai), will don the mask of Por Gae covering their eyes and face whilst tattooing the Yant on the devotee. This renders the Master completely blind as far as seeing the tattoo is concerned, and is seen as yet another proof of the sacred magic of Por Gae Dta Fai, and Sak Yant Tattoos. Many devotees of Sak Yant are also devotees of Por Gae Dta Fai, and will attend the days of reverence to Por Gae, receive his blessing and protection, as well as having the mask of Por Gae placed on his head. This placing of the mask on the head of the devotee is known as “Korb Kroo.”

The Ruesi in Modern Times

Most of the Ruesi in modern Thailand are of the "Dabos" type, and are not required to keep vows of sexual abstinence or poverty. Indeed, modern Ruesi often have a nice car, mobile phone, are married, and have children. The only requirement for such Ruesi is that of magical knowledge and psychic ability (having developed these qualities in meditative states).

Almost all Ruesi in Thailand practice the art of magical tattooing, known as Sak Yant. Sak Yant is the study and practice of Sacred Geometry in the form of Buddhist and Animist traditions. These Sacred Yantra are said to possess miraculous powers to heal and protect and a host of other purposes

Rishi is also a male given name, and less commonly a Brahmin last name.

In Carnatic Music, "Rishi" is the seventh chakra (group) of Melakarta ragas. The names of chakras are based on the numbers associated with each name. In this case, there are seven rishis and hence the 7th chakra is "Rishi".[14][15]

The descendent families of these Rishis, refer to their ancestral lineage through their family "gotra". This is a common practice among the Brahmin sects of the current Hindu society.