In the Hindu epic Mahabharata, Sahadeva (Sanskrit: सहदेव) was the youngest of the five Pandava brothers. Nakula and Sahadeva were twins born to Madri, who had invoked the Ashwini Kumaras using Kunti's boon.

Etymology and other names

The word Sahadeva is derived from two Sanskrit words saha (सह) and deva (देव). Saha means with and deva is a Hindu term used for deity. So literally, Sahadeva means with Gods. Another meaning is thousand Gods. Sahadeva and his brother Nakula, are both called as Ashvineya (आश्विनेय), as they were born from Ashvins.[1]

Due to Pandu's inability to bear children (because of the curse of Rishi Kindama), Kunti had to use the boon given by Sage Durvasa to give birth to her three children. She shared the boon with Pandu's second wife, Madri (the princess of Madra), who invoked the Ashwini Kumaras to beget Nakula and Sahadeva.

Later, Pandu died due to his Kindama's curse when he attempted an intercourse with his wife, Madri. The latter also immolated herself in her husband's pyre, so Nakula and Sahadeva lost both their parents at an early age. It is also believed that Sahadeva was an incarnation of Shukra, the guru of asuras.

Later Kunti and the five Pandavas moved to Hastinapura. Sahadeva's core skill lay in the wielding of the sword.[2] Sahadeva is said to be mild-mannered, bashful, patient, and virtuous.[3]

All five Pandava brothers were wed concurrently to Draupadi, and each had a son by her. Sahadeva's son with Draupadi was Srutasen. Sahadeva also married his maternal cousin Vijaya, the daughter of Dyutimat, the king of Madra, and had a son named Suhotra. His son Suhotra was killed by Karna. 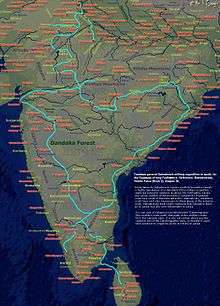 Sahadeva's military expedition to the southern kingdoms, as per epic Mahabharata.

Sahadeva was sent south by the eldest Pandava Yudhishthira to subjugate kingdoms for the Rajasuya sacrifice, after crowning as the Emperor of Indraprastha. He was specifically chosen for the south because of his expertise with the sword, and because Bhishma opined that Southerners are skilled with sword-fighting in general.[4]

The Mahabharata mentions several kingdoms to the south of Indraprastha which were conquered by Sahadeva. Some of them are as under:[5] 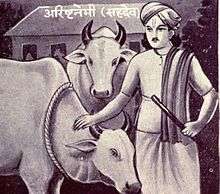 Sahadeva works as a cowherd in exile.

Yudhishthira's loss in the game of dice meant that all Pandavas had to live in exile for 13 years. Once in exile, Jatasura, disguised as a Brahmin, kidnapped Nakula along with Draupadi, Sahadeva and Yudhishthira; Bhima rescued them eventually.

In the 13th year, Sahadeva disguised himself as a Vaishya and assumed the name of Tantipal (within themselves Pandavas called him Jayadbala) at the Kingdom of Virata.[6] He worked as a cowherd who supervised the maintenance and upkeep of all cows in Virata's kingdom.

Role in the Kurukshetra War

Sahadeva was very good in Astrology. Duryodhana, on the advice of Shakuni approached Sahadeva in order to seek the right time (muhurta) to start the Mahabharata war so that the Kauravas will be victorious. Sahadeva disclosed the same for the Kauravas in spite of knowing that Kauravas were their enemy, as Sahadeva was known to be very honest. Then, Krishna planned to create an eclipse much before the beginning of the war. In the mean time, both Sun and Moon got shocked by Krishna's thought and appeared before Krishna stating that this will create a huge imbalance in the entire Universe. Then, Krishna declared that as Earth, Moon and Sun are together in one place, this in itself was an eclipse.

Krishna once asked Sahadeva, what should be done to stop the war. Sahadeva told him that Krishna and Shakuni must be tied down and imprisoned and all the Pandavas along with Duryodhana must be sent to forest while Karna must be made the emperor.

Sahadeva desired Virata to be the general of the Pandava army, but Yudhishthira and Arjuna opted for Dhristadyumna.[7]

As a warrior, Sahadeva slew prominent war-heroes on the enemy side. The flag of Sahadeva's chariot bore the image of a silver swan. He defeated 40 brothers of Duryodhana, while fighting them simultaneously.[8][9] During the gambling loss, he had taken an oath of slaying Shakuni. He accomplished this task successfully on the 18th day of battle. Among other prominent war-heroes killed by Sahadeva were Shakuni's son Uluka and Trigata Prince Niramitra.

After the war, Yudhishthira appointed Nakula and Sahadeva as the Kings of Madra Pradesh.[10]

Upon the onset of the Kali Yuga and the departure of Krishna, the Pandavas retired. Giving up all their belongings and ties, the Pandavas, accompanied by a dog, made their final journey of pilgrimage to the Himalayas.

Excepting Yudhishthira, all of the Pandavas grew weak and died before reaching heaven. Sahadeva was the second one to fall after Draupadi. When Bhima asks Yudhishthira why Sahadeva isn't permitted the same, the reason given is his pride in his wisdom.[11]

A "sahadeva" is someone who is aware of everything but prefers to stay silent.