Larvik has a daily ferry connection to Hirtshals, Denmark.

The Norse form of the name must have been Lagarvík. The first element is the genitive case of lǫgr m 'water; river' (now called Numedalslågen river), the last element is vík f 'cove, wick'. The meaning is "the cove at the mouth of (Numedals)lågen". Prior to 1889, the name was written "Laurvik" or "Laurvig".

The coat of arms is from modern times, and was granted in 1989. It is blue with a silver-colored mast with three sails to represent the maritime traditions of the municipality.

The city of Larvik (in contemporaneous Danish spelling: Laurvig) was founded in 1671 by Ulrik Fredrik Gyldenløve, who became the first count of Laurvig. The castle can still be visited today. Larvik houses the Treschow estate, Fritzøehus, which is currently owned by Mille-Marie Treschow, reportedly "Norway's richest woman". The Treschow estate was created in the 1820s when the last count of Laurvig was declared bankrupt. 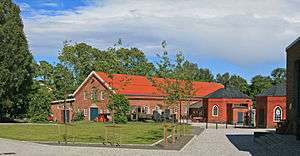 Larvik Museum Society was founded in 1916, with the purpose of preserving, and restoring the city’s collection of historic buildings.[2][3][4]

Treschow-Fritzøe Museum (Verkensgården) houses exhibitions from the former Treschow-Fritzøe ironworks. Verkensgarorden displays tools, equipment, drawings, and models illustrating the iron-production era in Larvik, which dated from 1670 to 1870. The exhibition shows various aspects; from the geological process of creation to production, and use of the stone larvikite, the area's main export product. The Iron Works was closed during 1868.[5]

The Manor House (Herregården) was built by Ulrik Fredrik Gyldenløve for his third wedding in 1677. It is a large wooden structure with well-preserved baroque interiors from the 1730s. Herregården manor house is a large Baroque wooden building with classic elements. The interior design is mainly Baroque and Regency style. The house is filled with 17th- and 18th-century antiques.[6]

Larvik Maritime Museum (Larvik Sjøfartsmuseum) is housed in Larvik's oldest brick building, dating from 1730. Larvik Maritime Museum is located in the old customs house, and is the residence of the local building inspector. This museum displays models of ships, paintings of sailing vessels, and other nautical artifacts to bring the port's maritime history alive. One section of the museum is devoted to the expeditions of Larvik-born Thor Heyerdahl.[7][8]

Fritzøehus is located in Fritzøehus park which today is a designated conservation area for the purpose of preserving the large beech forests and the distinctive surrounding landscape. In the park there are also walnut, fir, and spruce. The park was built in the English style in the 1860s. In the courtyard stands a water fountain and a sculpture of a bear by sculptor Anne Grimdalen. The park includes a collection of fallow deer and mouflon from the Mediterranean. [10] 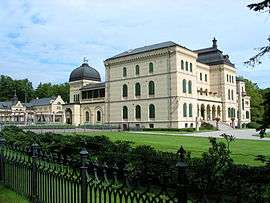 The municipality is approximately 105 kilometres (65 mi) southwest of Oslo. The municipality covers an area of 530 square kilometres (200 sq mi), and has a population of 41,211 (23,100 of which reside in the town). The economy of the municipality relies heavily on agriculture, commerce and services, light industry and transportation.

The district also includes the town of Stavern (population: 5,000) and the villages of Nevlunghavn, Helgeroa, Kvelde, Hvarnes, and Tjølling. Notable geographical features include the lake Farris and the river Numedalslågen, locally called Lågen, which terminates in Larvik, east of the town. Other bodies of water include the lakes Eikeren, Farris, Goksjø and Hallevatnet.

Larvik is also noted for its natural springs of mineral water, Farriskildene, which have been commercially exploited under the brand name Farris. At Kaupang in Tjølling, lie the remains of the medieval Skiringssal trading outpost. Larvik is also home to the world's northernmost natural occurrence of Fagus sylvatica forests (European Beech tree or Norwegian: Bøkeskogen).

The following cities are twinned with Larvik:[12]