Latinxua is historically notable as being the first romanization system used in place of Chinese characters by native Chinese speakers. It was originally developed by groups of Chinese and Russian scholars in the Soviet Union and used by Chinese immigrants there until the majority of them left the country. Later, it was revived for some time in Northern China where it was used in over 300 publications before its usage was ended by the People's Republic of China.

The work towards constructing the Beifangxua Latinxua Sin Wenz (北方話拉丁化新文字) system began in Moscow as early as 1928 when the Soviet Scientific Research Institute on China sought to create a means through which the large Chinese population living in the far eastern region of the U.S.S.R. could be made literate,[1] facilitating their further education.

This was significantly different from all other romanization schemes in that, from the very outset, it was intended that the Latinxua Sin Wenz system, once established, would supersede the Chinese characters.[2] They decided to use the Latin alphabet because they thought that it would serve their purpose better than Cyrillic.[3] Unlike Gwoyeu Romatzyh, with its complex method of indicating tones, Latinxua Sin Wenz system does not indicate tones at all.

In 1931 a coordinated effort between the Soviet sinologists V.M. Alekseev, A.A. Dragunov and A.G. Shrprintsin, and the Moscow-based Chinese scholars Qu Qiubai, Wu Yuzhang, Lin Boqu, Xiao San, Wang Xiangbao, and Xu Teli established the Latinxua Sin Wenz system.[4] The system was supported by a number of Chinese intellectuals such as Guo Moruo and Lu Xun, and trials were conducted amongst 100,000 Chinese immigrant workers for about four years[5] and later, in 1940-1942, in the communist-controlled Shaanxi-Gansu-Ningxia Border Region of China.[6] In November 1949, the railways in China's north-east adopted the Latinxua Sin Wenz system for all their telecommunications.[7]

For a time, the system was very important in spreading literacy in Northern China; and more than 300 publications totaling half a million issues appeared in Latinxua Sin Wenz.[2] However:

In 1944 the latinization movement was officially curtailed in the communist-controlled areas [of China] on the pretext that there were insufficient trained cadres capable of teaching the system. It is more likely that, as the communists prepared to take power in a much wider territory, they had second thoughts about the rhetoric that surrounded the latinization movement; in order to obtain the maximum popular support, they withdrew support from a movement that deeply offended many supporters of the traditional writing system.[8]

Sin Wenz was designed so that every dialect had its own form of the alphabet. The letters below represent only one of the thirteen possible schemes present, the below form being that for Northern Mandarin.[9]

Much of Sin Wenz is similar to Pinyin in its orthography. However, palatal affricates are written with the same letters as velar stops, so Beijing is written as Beiging in Sin Wenz. Other differences include the usage of x for both the sounds [x] and [ɕ], so the characters 畫 (pinyin: huà) and 下 (pinyin: xià) are written as xua and xia.[10] 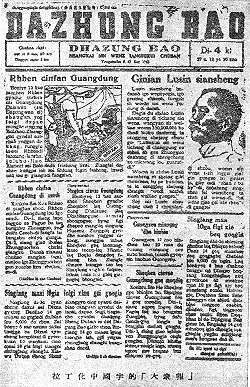 Sin Wenz exhibits some interchangeability symbol for alveolo-palatal (j, q, x in pinyin) between g, k, x with z, c, s. For example, 新 (pinyin: xīn; literally: "new") can be written as xin or sin in Sin Wenz. This is because Sin Wenz generally distinguishes sequences [tsj-][tsʰj-][sj-] from [tɕ-][tɕʰ-][ɕ-], which distinction is lost in Standard Mandarin and not made by Pinyin.

1e and ye is written as o and yo after initials g, k and x. For example: gogo (Chinese: 哥哥; pinyin: gēge; literally: "elder brother"), xyosheng (Chinese: 学生; pinyin: xuésheng; literally: "student") 2The word 有 (pinyin: yǒu) is written as iou. Other words with the same sound is written as iu. This is because the word 有 occurs frequently in Chinese. 3Standalone ui, un and ung are written as wei, wen and weng respectively. 4What is written as i (IPA [ɨ]) after zh, ch, sh, r, z, c and s in pinyin is not written in Sin Wenz.

Because Sin Wenz is written without indicating tones, ambiguity could arise with certain words with the same sound but different tones. In order to circumvent this problem, Sin Wenz defined a list of exceptions. For example, 买 (pinyin: mǎi; literally: "buy") and 卖 (pinyin: mài; literally: "sell") are of the same sound but different tones. The former is written as maai and the latter is written as mai in Sin Wenz. In addition, Sin Wenz also calls for the use of the postal romanization when writing place names in China.