LeMoyne–Owen College was formed through the 1968 merger of LeMoyne College and Owen College, both private, historically black, church-affiliated colleges.[1]

LeMoyne Normal and Commercial School traces its history to 1862, when the American Missionary Association (AMA) sent Lucinda Humphrey to open an elementary school at Camp Shiloh for free blacks and escaped slaves. This was one of more than ten schools founded by the AMA, an integrated organization led by black and white Congregational, Methodist and Presbyterian ministers.

It was established soon after the occupation of Memphis by Federal troops during the Civil War. First known as Lincoln Chapel, the school relocated to Memphis in 1863 [from where?] In 1866 it was destroyed during race riots that followed the withdrawal of federal troops. The school was rebuilt and in 1867 it reopened with 150 students and six teachers.

In 1870, Francis Julius LeMoyne (1798-1879), a Washington, Pennsylvania doctor, donated $20,000 to the American Missionary Association to build an elementary and secondary school for prospective teachers. LeMoyne, who was a notable abolitionist, traveled from his Pennsylvania home to visit the new school. He donated a clock for the school's tower.

The Memphis yellow fever epidemic started in 1873 and took a toll on many school personnel.

Under the leadership of the third principal, Andrew J. Steele, the institution experienced three decades of growth and development.[2]

In 1914 the school moved from Orleans Street to its present site on Walker Avenue. Steele Hall, the first building on the new campus, was erected that same year. LeMoyne became a junior college in 1924 and then a four-year college in 1930. The LeMoyne College was chartered by the State of Tennessee just four years later.

Owen College traces its history as a junior college to 1947, when the Tennessee Baptist Missionary and Educational Convention bought property on Vance Avenue. S. A. Owen Junior College opened at that location in 1954. 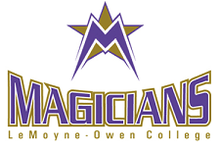 In 1975, the LeMoyne–Owen College men's basketball team won the NCAA Men's Division III Basketball Championship.[3] the school was then a member of Division III level of the NCAA. Up to this day, LeMoyne-Owen has been the only HBCU to win a national championship at that level.

According to a 2007 AP article,[4] LeMoyne-Owen had suffered from management and accreditation issues due to a lack of financial resources, with Southern Association of Colleges and Schools causing the college to be placed on probation for two years.

In August 2007, in a controversial move, the City of Memphis ensured the college would open for the fall 2007 semester by pledging $3 million in taxpayer funds to be added to other substantial pledges that came from the United Negro College Fund, Cummins Inc., radio host Tom Joyner and the United Church of Christ.

However, 7 years after the installment of its 11th President, Johnnie B. Watson, the college now has reaffirmed its accreditation and has grown its current endowment to 20 million dollars.