Kentucky State University ( KSU ) is a public co-educational university in Frankfort, Kentucky. Founded in 1886 as the State Normal School for Colored Persons, KSU was the second state-supported institution of higher learning in Kentucky.[1] It has a total undergraduate enrollment of 2,025 and a total graduate enrollment of 134.[2] 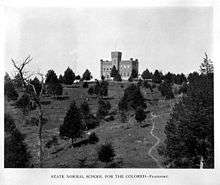 Kentucky State University was chartered in May 1886 as the State Normal School for Colored Persons, only the second state-supported institution of higher learning in Kentucky.[1] During the euphoria of Frankfort's 1886 centennial celebration, the city donated $1,500 towards the purchase of land for a new college on a bluff overlooking Frankfort.

KSU became a land-grant college in 1890, and the departments of home economics, agriculture and mechanics were added to the school's curriculum.[1] The school produced its first graduating class of five students in the spring of that year. A high school was organized in 1893. This expansion continued into the 20th century in both name and program. In 1902, the name was changed to Kentucky Normal and Industrial Institute for Colored Persons. The name was changed again in 1926 to Kentucky State Industrial College for Colored Persons.

The Paul G. Blazer Library,[6] constructed in 1960,[7] houses a collection of more than 700,000 items includes extensive reference, periodical and circulating collections of materials such as books, videos, microforms, sound recordings and others, to aid students in their course work and research.[8] It is named after Paul G. Blazer, a strong supporter of education[9] who was the founder and CEO of Ashland Oil and Refining Company in Ashland, Kentucky.

The Exum Center, the university's athletic and recreational complex, was named after William Exum, the first African-American varsity football player at the University of Wisconsin.[11] Exum was hired as head of KSU's Physical Education department in 1949, and later made head of the Athletics department. He then became manager of the United States Track and Field teams at the 1972 and 1976 Olympics. Exum retired from KSU in 1980.