This article is about the western islands of French Polynesia. For the Caribbean island group, see Leeward Islands.

The Leeward Islands (French: Îles Sous-le-vent; Tahitian: Fenua Raro Mata’i, literally "Islands Under-the-Wind") are the western part of the Society Islands in French Polynesia, an overseas collectivity of France in the South Pacific. They lie south of the Line Islands (part of Kiribati), east of the Cooks and north of the Austral Islands (also part of French Polynesia). Their area is 395 km² with a population of over 33,000. The islands to the west comprise a three atoll group: Manuae (aka Scilly Atoll), Motu One atoll (aka Bellinghausen), lying most northerly of the Leeward Islands, and to the southeast Maupihaa atoll (aka Mopelia). More to the east lies a mainly high island cluster consisting of Maupiti (Tahitian name: Maurua), Tupai atoll, Bora Bora (Tahitian name: Vava'u), the most known of the Leeward Islands in the western world due to its World War II United States naval base and subsequent tourism industry, Tahaa (Tahitian name: Uporu), lying just north of the largest island of the group, Raiatea (Tahitian names: Hava'i, Ioretea) which possesses the largest city and local capital of the Leeward Islands, namely Uturoa, as well as the highest elevation, the just over 1,000 m mount Tefatua, and finally the easternmost island of the group, Huahine (Tahitian name: Mata'irea) which at high tide is divided into two: Huahine Nui ("big Huahine") to the north and Huahine Iti ("small Huahine") to the south.

The first European to encounter the archipelago was James Cook on 12 April 1769 during the British expedition to observe the transit of Venus. On this first voyage (he subsequently revisited the islands twice), he named the Leeward group of islands Society in honor of the Royal Society. After France declared a protectorate over Tahiti in 1840, the British and French signed the Jarnac Convention, in 1847, declaring that the kingdoms of Raiatea, Huahine and Bora Bora were to remain independent from either powers and that no single chief was to be allowed to reign over the entire archipelago. France eventually broke the agreement, and the islands were annexed and became a colony in 1888 (eight years after the Windward Islands) after many native resistances and conflicts called the Leewards War, lasting until 1897.[2][3]

The islands are mountainous, consisting of volcanic rock. They are formed of trachyte, dolerite and basalt. There are raised coral beds high up the mountains, and lava occurs in a variety of forms, even in solid flows. Volcanic activity ceased so long ago that the craters have been almost entirely obliterated by erosion.

Flora includes breadfruit, pandanus, and coconut palms. The limited terrestrial fauna includes feral pigs, rats, and small lizards. There are several species of freshwater fish inhabiting the small streams on the islands, but the fringing coral reefs around the islands exhibit a dazzling array of fish and other salt water-dwelling species.

Tourism is the mainstay of the economy. Agriculturally, the major products are copra, sugar, rum, mother-of-pearl, and vanilla. 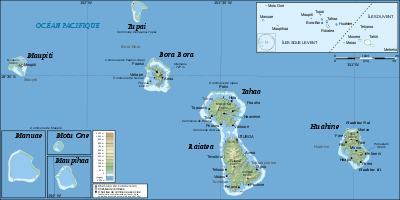 Topographic map of the Leeward Islands