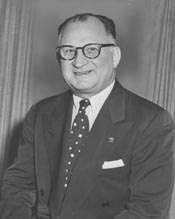 Leo Elwood Allen (October 5, 1898 – January 19, 1973), American politician, was a Republican member of the United States House of Representatives for fourteen terms, 1933–1961, representing the 13th District of Illinois 1933–1949, and the 16th District of Illinois 1949–1961, he also served on the House Rules Committee, becoming chairman from 1947 to 1949 and again from 1953 to 1955. He was born in Elizabeth, Illinois and was educated at University of Michigan. Allen was the Jo Daviess County, Illinois Court clerk and also taught school in Galena and practiced law before being elected to the 73rd Congress in 1932.

Allen retired to Galena and is buried in Greenwood Cemetery (Galena, Illinois).