Claude Denson Pepper (September 8, 1900 – May 30, 1989) was an American politician of the Democratic Party, and a spokesman for left-liberalism and the elderly. In foreign policy he shifted from pro-Soviet in the 1940s to anti-Communist in the 1950s. He represented Florida in the United States Senate from November 4, 1936, to January 3, 1951, and the Miami area in the United States House of Representatives from January 3, 1963 until his death on May 30, 1989.

Pepper was born in Chambers County, Alabama, in a shack belonging to poverty-stricken sharecroppers. He was the son of Lena Corine (née Talbot) and Joseph Wheeler Pepper.[1] Pepper attended school in Camp Hill and became a schoolteacher in Dothan. He then worked in an Ensley steel mill before beginning studies at the University of Alabama.

While in college he joined the Army for World War I and served in the Student Army Training Corps (precursor to the Reserve Officers' Training Corps), with the war ending before he could see active service. After graduating in 1921 Pepper attended Harvard Law School, receiving his degree in 1924. He briefly taught law at the University of Arkansas and then moved to Perry, Florida, where he opened a law practice. He was elected to the Florida House of Representatives in 1928 and served from 1929 to 1931. After being defeated for reelection in 1930 he moved his law practice to Tallahassee, the state capital. 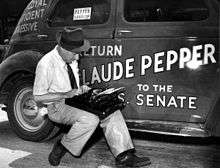 Pepper received the most votes in the Democratic primary for United States Senate in 1934, but lost the runoff to Park Trammell. He was unopposed in the 1936 special election following the death of Senator Duncan U. Fletcher, and succeeded William Luther Hill, who had been appointed pending the special election. In the Senate, Pepper became a leading New Dealer and close ally of President Franklin Delano Roosevelt. He was unusually articulate and intellectual, and, collaborating with labor unions, he was often the leader of the liberal-left forces in the Senate. His reelection in a heavily fought primary in 1938 solidified his reputation as the most prominent liberal in Congress. His campaign based on a wages-hours bill, which soon became the Fair Labor Standards Act of 1938. He sponsored the Lend-Lease Act. He filibustered an anti-lynching bill in 1937.[2]

In 1943, a confidential analysis by Isaiah Berlin of the Senate Foreign Relations Committee for the British Foreign Office described Pepper as:

a loud-voiced and fiery New Deal politician. Before Pearl Harbor, he was a most ardent interventionist. He is equally Russophile and apt to be critical of British Imperial policy. He is an out and out internationalist and champion of labour and negro rights (Florida has no poll tax) and thus a passionate supporter of the Administration's more internationalist policies. He is occasionally used by the President for the purpose of sending up trial balloons in matters of foreign policy. With all these qualities, he is, in his methods, a thoroughly opportunist politician.[3]

Because of the power of the Conservative Coalition, he usually lost on domestic policy. He was, however, more successful in promoting an international foreign policy based on friendship with the Soviet Union. In 1946, Pepper appeared frequently in the national press and began to eye the 1948 presidential race. He considered running with his close friend and fellow liberal, former Vice President Henry A. Wallace, with whom he was active in the Southern Conference for Human Welfare.[4]

Pepper gave lukewarm support to Harry S. Truman in 1948, saying the Democrats should nominate Dwight D. Eisenhower instead; but he did not support Wallace's Progressive run that year. He was re-elected in 1944, but lost his bid for a third full term in 1950 by a margin of over 60,000 votes. Ed Ball, a power in state politics who had broken with Pepper, financed his opponent, U.S. Representative George A. Smathers. A former supporter of Pepper, Smathers repeatedly attacked "Red Pepper" for having far-left sympathies, condemning both his support for universal health care and his alleged support for the Soviet Union. Pepper had traveled to the Soviet Union in 1945 and, after meeting Soviet leader Joseph Stalin, declared he was "a man Americans could trust."[5] Because of his left-of-center sympathies and his bright red hair, he became widely nicknamed "Red Pepper."

At a speech made on November 11, 1946, before a pro-Soviet group known as Ambijan, which supported the creation of a Soviet Jewish republic in the far east of the USSR, Pepper told his listeners that "Probably nowhere in the world are minorities given more freedom, recognition and respect than in the Soviet Union [and] nowhere in the world is there so little friction, between minority and majority groups, or among minorities." Democracy was "growing" in that country, he added, and he asserted that the Soviets were making such contributions to democracy "that many who decry it might well imitate and emulate rather than despair."

Two years later, on November 21, 1948, speaking to the same group, he again lauded the Soviet Union, calling it a nation which has recognized the dignity of all people, a nation wherein discrimination against anybody on account of race is a crime, and which was in fundamental sympathy with the progress of mankind.[6] He was defeated in the 1950 Democratic primary for U.S. Senate by George Smathers.

Pepper returned to law practice in Miami and Washington, failing in a comeback bid to regain a Senate seat in the 1958 Democratic primary in which he challenged his former colleague, Spessard Holland.[7] However, Pepper did carry eleven counties, including populous Dade County,[8] where he later staged a remarkable comeback.

In 1950 President Harry Truman called George Smathers into a meeting at the White House and reportedly said, "I want you to do me a favor. I want you to beat that son-of-a-bitch Claude Pepper."[5] Pepper had been part of an unsuccessful 1948 campaign to "dump Truman" as the Democratic presidential nominee and George Smathers had been his manager and pupil. Smathers broke with Pepper and ran against him in the Democratic primary (which at the time in Florida was tantamount to election, the Republican Party still being in infancy there). The contest was extremely heated, and revolved around policy issues, especially charges that Pepper represented the far left and was too supportive of Stalin. Pepper's opponents circulated widely a 49-page booklet titled The Red Record of Senator Claude Pepper.[9]

Part of American political lore is the Smathers "redneck speech," which Smathers reportedly delivered to a poorly educated audience. The "speech" was never given; it was a hoax dreamed up by reporters who were conversing among themselves. The hoax eventually made its way, attributed to unnamed "Northern newspapers," into Time Magazine. In an April 1950 article, Time falsely claimed that Smathers had said:

Are you aware that Claude Pepper is known all over Washington as a shameless extrovert? Not only that, but this man is reliably reported to practice nepotism with his sister-in-law, he has a brother who is a known homo sapiens,[10] and he has a sister who was once a thespian in wicked New York. Worst of all, it is an established fact that Mr. Pepper, before his marriage, habitually practiced celibacy.[11]

The Smathers campaign denied that Smathers had made such a speech, as did the reporters who covered his campaign, but the hoax followed Smathers to his death.[12] Smathers offered $10,000 to anyone who could prove he had made these remarks, but no one ever attempted to collect.[13] 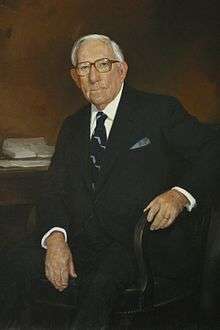 Portrait of Pepper in the Collection of the U.S. House of Representatives 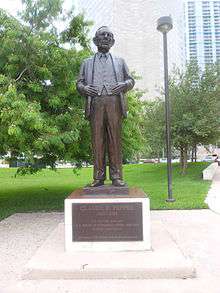 Statue of Claude Pepper in Miami

In 1962 Pepper was elected to the United States House of Representatives from a newly created liberal district around Miami and Miami Beach established due to population growth in the area, becoming one of very few former United States Senators in modern times (the only other examples being James Wolcott Wadsworth Jr. from New York and Alton Lennon from North Carolina) to be elected to the House after their Senate careers. He remained there until his death in 1989, rising to chair of the powerful Rules Committee in 1983. Despite a reputation as a leftist in his youth, Pepper turned staunchly anti-communist in the last third of his life, opposing Cuban leader Fidel Castro and supporting aid to the Nicaraguan Contras.

In the early 1970s, Pepper chaired the Joint House-Senate Committee on Crime; then, in 1977, he became chair of the new House Select Committee on Aging, which became his base as he emerged as the nation's foremost spokesman for the elderly, especially regarding Social Security programs. He succeeded in strengthening Medicare. In 1980 the committee under Pepper's leadership initiated what became a four year investigation into health care scams that preyed on older people; the report, published in 1984 and commonly called "The Pepper Report", was entitled "Quackery, a $10 Billion Scandal".[14]

In the 1980s he worked with Alan Greenspan in a major reform of the Social Security system that maintained its solvency by slowly raising the retirement age, thus cutting benefits for workers retiring in their mid-60s, and in 1986 he obtained the passage of a federal law that abolished most mandatory retirement ages. In his later years, Pepper, who customarily began each day by eating a bowl of tomato soup with crackers, sported a replaced hip and hearing aids in both ears, but continued to remain an important and often lionized figure in the House.

Pepper became known as the "grand old man of Florida politics." He was featured on the cover of Time Magazine in 1938 and 1983. During this time, Republicans often joked that he and House Speaker Tip O'Neill were the only Democrats who really drove President Ronald Reagan crazy.

On May 26, 1989, Pepper was presented with the Presidential Medal of Freedom by President George H. W. Bush. Four days later, Pepper died in his sleep from stomach cancer. He was 88 years old. His body lay in state for two days under the Rotunda of the United States Capitol; he was the 26th American so honored and was the last person to lie in state in the Capitol rotunda with an open casket. Pepper was buried at Oakland Cemetery in Tallahassee.[15]

A number of places in Florida are named for Pepper, including the Claude Pepper Center[16] at Florida State University (housing a think tank devoted to intercultural dialogue in conjunction with the United Nations Alliance of Civilizations and an institute on aging)[17] and the Claude Pepper Federal Building in Miami, as well as several public schools. Large sections of US 27 in Florida are named Claude Pepper Memorial Highway. Since 2002, the Democratic Executive Committee (DEC) of Lake County has held an annual "Claude Pepper Dinner" to honor Pepper's tireless support for senior citizens. He also has the Claude Pepper Building No. 31 named for him at the National Institutes of Health, located in Bethesda, Maryland. Pepper's wife Mildred was well known and respected for her humanitarian work as well. She was also honored with a number of places named in Florida.[18][19][20]

In 1982, Pepper received the Award for Greatest Public Service Benefiting the Disadvantaged, an award given out annually by Jefferson Awards.[22]

In 1985 he received the Freedom medal.