Dorothy Louise McIntosh Slaughter (born August 14, 1929) has been the United States representative for New York's 25th congressional district since 1987. She is a member of the Democratic Party. The district, numbered as the 30th District from 1987 to 1993 and the 28th District from 1993 to 2013, is based in Rochester and includes most of surrounding Monroe County. She was the Chairwoman of the House Rules Committee from 2007 until 2011, and has served as ranking minority member of the Committee since 2011, a post she also held from 2005 to 2007.

Slaughter was born Dorothy Louise McIntosh on August 14, 1929, in Lynch, Kentucky, a coal mining town built by a subsidiary of U.S. Steel. She is the daughter of Daisy Grace (Byers) and Oscar Lewis McIntosh, a blacksmith for a coal mine.[1] She had two brothers, Philip and David as well as two sisters, Marjorie and Virginia. Her sister Virginia died of pneumonia while she was a child; Slaughter later cited this as her reason for earning degrees in microbiology and public health.

The family moved to Monticello, Kentucky, where Slaughter attended high school. After graduating from high school, she enrolled at the University of Kentucky in Lexington, Kentucky, where she studied microbiology. After graduating with a bachelor's degree, she went on to earn a master's degree in public health, also from the University of Kentucky.

After graduate school, she went to work for Procter & Gamble in New York doing market research. Already involved in community groups like the Scouting in New York and the League of Women Voters, Slaughter became increasingly concerned with local political and community issues. She was involved in a local environmental group, the Perinton Greenlands Association, which promoted recycling and opposed development of Hart's Woods. Slaughter decided to run for the Monroe County Legislature, winning on her third try. In 1975, while in the county legislature, she accepted an offer from then- New York Secretary of State Mario Cuomo to serve as his regional coordinator in the Rochester area. When Cuomo was elected lieutenant governor in 1979, Slaughter stayed on as his Rochester regional coordinator.

In 1982 local Democratic supporters approached Slaughter with a desire to see her run for the New York State Assembly against the Republican incumbent Thomas A. Hanna, whom she defeated by a narrow margin. In 1984, she was re-elected by the more substantial margin of 10 points. She sat in the 185th and 186th New York State Legislatures.

After four years in the state assembly, Slaughter decided to run for the Democratic nomination in New York's 30th congressional district. At the time, the district included downtown and eastern Rochester, most of eastern Monroe County, all of Genesee County and northern Livingston and Ontario counties. Moderate Republican Barber Conable had represented the district for 20 years before giving way in 1985 to a considerably more conservative Republican, Fred J. Eckert. Slaughter defeated Eckert by one point in the 1986 midterm election. Slaughter was the first Democrat to represent the 30th District since 1910, the first woman to represent Western New York, as well as the first Democratic representative ever elected to a full term from the 30th since its creation in 1893. It had been renumbered several times in the previous century.

Redistricting after the 1990 census renumbered Slaughter's district as the 28th District and turned it into a much more compact district comprising a narrow ribbon in Monroe County. It included all of Rochester. The new map put Slaughter into the same district as 30-year incumbent Republican Frank Horton, a close friend of Slaughter's. The district had already been moving away from its moderate Republican roots, but the new territory made the district solidly Democratic. Horton opted to retire, though he would have been a heavy underdog against Slaughter in any case. She has been reelected seven more times since then.

After the 2000 census, much of her district was merged with the 29th District of fellow Democratic Representative John LaFalce, which included Niagara Falls and the northern third of Buffalo. Original plans called for LaFalce's district to be merged with that of Republican Jack Quinn, who represented the other side of Buffalo. The new district retained Slaughter's district number, but was geographically more LaFalce's district. Only a thin tendril in Orleans County connected Rochester to Buffalo. However, LaFalce did not seek a 15th term, effectively handing the seat to Slaughter. With her election in 2002, she became the first woman to represent a significant portion of Buffalo in Congress.

Following the 2010 census, Slaughter's district was renumbered as the 25th District. It was significantly more compact than its predecessor, as it took in most of Monroe County and lost its territory near Buffalo. However, it was also slightly less Democratic than her former territory. While President Barack Obama carried the old 28th with 68 percent of the vote, he would have carried the new 25th with 59 percent of the vote. She faced a vigorous and well-funded challenge from Republican Monroe County Executive Maggie Brooks, but Slaughter won a 14th term with 57.4% of the vote, on November 6, 2012.

In the 2014 election, Slaughter narrowly defeated her Republican opponent, Gates town supervisor Mark Assini, by 869 votes. After an extended period of vote counting, Assini conceded defeat on November 12, 2014, more than a week after the election was held.[2][3] It was the first close race that Slaughter had faced since her initial bid for the seat. 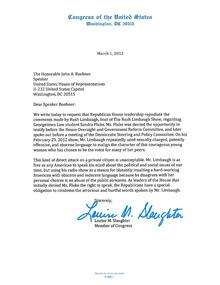 In January 1987, Slaughter entered Congress. In 1993, as a member of the United States House Committee on the Budget Slaughter secured the first $500 million earmarked by Congress for breast cancer research at the National Institutes of Health. Slaughter was also a co-sponsor of the National Institutes of Health Revitalization Act of 1993, and fought to ensure the legislation included language guaranteeing that women and minorities were included in all federal health clinical trials from that point forward.[4] Previously, all NIH-funded research was done on white males, even in trials related to predominantly female diseases such as breast cancer.[5] Slaughter fought to include language establishing an Office of Research on Women's Health at NIH in the legislation. Ten years after the creation of ORWH, the National Institutes of Health awarded Slaughter it's "Visionary for Women's Health Research" award.[6]

In early 2005, she authored the Fairness and Accountability in Broadcasting Act, which would reinstate the Fairness Doctrine. Along with Democratic Congressman John Conyers, in April 2006 Slaughter brought an action against President George W. Bush and others alleging violations of the Constitution in the passing of the Deficit Reduction Act of 2005. The case (Conyers v. Bush) was ultimately dismissed. After the 2006 mid-term takeover of the House by the Democratic Party, Slaughter was chosen to serve as Chairwoman of the United States House Committee on Rules at the start of the 110th Congress. She is the first woman in history to chair the Rules Committee.

In 2009, Slaughter wrote to the United States Department of Defense requesting an investigation into faulty body armor after reading an article in The New York Times, entitled, "Pentagon Study Links Fatalities to Body Armor." The article authored by Michael Moss reported that up to 80 percent of Marines who were killed in Iraq from wounds to the upper body could have survived if they had extra body armor. Slaughter's request resulted in the Department of Defense launching an investigation, recalling 16,000 pieces of body armor and replacing them with safer armor.[10]

As Chairwoman of the United States House Committee on Rules, Slaughter was heavily involved in the writing of the Patient Protection and Affordable Care Act and managed the rule for the legislation on the House Floor. Slaughter was strongly critical of the Stupak-Pitts Amendment, which places limits on taxpayer-funding for elective abortions in the context of the November 2009 Affordable Health Care for America Act.

In March 2010, Slaughter proposed that a House rule be passed to expedite the passage of health care reform legislation. The rule allows the House to deem the Senate version of the health care reform bill "already passed" by the House without the House holding a recorded vote on the bill. Critics, who called the strategy the "Slaughter Solution", charged this proposed strategy was an affront to democratic principles and challenged its constitutionality.[11] Ultimately this legislative strategy was never used to pass the Patient Protection and Affordable Care Act through the House.[12] Supporters observe that the courts have affirmed the rule's constitutionality, and that Republicans have used the rule repeatedly to pass major legislation such as the Patriot Act and the Tax Relief Reconciliation Act.[13][14][15]

On March 19, 2010, two days before the health care vote, a window in Slaughter's Niagara Falls office was broken with a brick.[16]

The Louise M. Slaughter Building on the RIT campus.

In 2011, Slaughter secured $62.5 million in federal funding for the Laboratory for Laser Energetics at University of Rochester. Slaughter's efforts to secure funds for her district was recognized by the Rochester Institute of Technology when it named its Center for Integrated Manufacturing Studies facilities in her honor. During the same year, with the potential of a government shutdown looming, Slaughter referenced H.R. 358, introduced by Rep. Joseph Pitts during the 112th Congress,[17] when she said at a pro-choice rally, "This is probably one of the worst times that we've seen because the numbers of people who are elected to Congress. I went through this as co-chair of the Arts Caucus. In '94, people were elected simply to come here to kill the National Endowment for the Arts. Now they're here to kill women".[18][19][20]

After the shooting of Gabrielle Giffords, Slaughter suggested the Federal Communications Commission was "not working anymore", and called for better policing of incendiary language.[21]

During the 112th Congress, the Stop Trading on Congressional Knowledge Act, or STOCK Act, which Slaughter first authored and introduced into Congress in 2006[22] - was passed into law.[23] The law prohibits the use of non-public information for private profit, including insider trading by Members of Congress and other government employees. It confirms changes to the Commodity Exchange Act and specifies reporting intervals for financial transactions.

Slaughter is one of the most liberal and progressive members of the New York congressional delegation from upstate New York, and in the 110th Congress, was the most progressive member of the entire House of Representatives according to the National Journal.[24]

Slaughter is one of several Democratic congressmen who post at Daily Kos, a Democratic-oriented blog. She is a member of the Congressional Progressive Caucus. She is the oldest woman serving in Congress, followed by United States Senator Dianne Feinstein (CA-D), who is four years younger than Slaughter.

Slaughter serves on the Democratic Steering & Policy Committee. She is the Democratic Chair of the Congressional Arts Caucus and the bipartisan Congressional Pro-Choice Caucus. Slaughter also serves as Co-Chair of the Future of American Media Caucus and is former Co-Chair of the Congressional Caucus for Women's Issues. After Democratic Representative Martin Frost, the ranking member on the House Rules Committee, was defeated for reelection, Slaughter was appointed to fill this position, becoming the first female member of Congress to serve in this post. After the 2006 election, she became the first woman to chair this committee.

While traveling for work, she met Robert "Bob" Slaughter, in San Antonio, Texas, and married him in 1957. After marrying, the couple moved to Fairport, New York, a suburb of Rochester, where Bob had been offered a job. The couple have three daughters: Megan, Amy and Robin, and seven grandchildren. Bob died in May 2014, aged 82.[25] Although she has lived in Western New York for six decades, she still speaks with a marked Kentucky accent.[26]

Key: (i) = Incumbent Source: New York State Board of Elections

Key: (i) = Incumbent Source: New York State Board of Elections

Key: (i) = Incumbent Source: Monroe County Board of Elections