John Dalzell was born in New York City. He moved with his parents, Samuel Dalzell and Mary McDonnell Dalzell to Pittsburgh, Pennsylvania in 1847.

He attended the common schools and the Western University of Pennsylvania in Pittsburgh. He graduated from Yale College, where he was a member of Scroll and Key, with the class of 1865. He studied law, was admitted to the bar in 1867 and commenced practice in Pittsburgh.

In 1902 he lost his bid for the Speakership of the House of Representatives to Joseph G. Cannon.

Dalzell was a delegate to the Republican National Conventions in 1904 and 1908, and served as a Regent of the Smithsonian Institution from 1906 to 1913. After the death of Pennsylvania representative Henry H. Bingham in March 1912, Dalzell became the longest continuously-serving member of the House of Representatives, or the "Father of the House." He was defeated for renomination later in 1912 and left Congress in March 1913.

As cited in "The Congressional Career of John Dalzell with Special Emphasis Upon His Tariff Views" by Kathryn E. Beazell, A.B.," John Dalzell worked closely with President Theodore Roosevelt. "It was said that because of President Roosevelt's outspoken manner, scores of Congressmen stayed away from the White House. But during the seven years that Mr. Roosevelt occupied the White House, he had no more frequent or welcome visitor than Mr. Dalzell. Oftentimes, when someone wanted favor from Mr. Roosevelt, Mr. Dalzell was asked to intercede. It was also said that with Presidents Harrison and McKinley, Mr. Dalzell was in close and constant touch, and that many of their ideas were brought before the House by Mr. Dalzell." At one point, President Theodore Roosevelt was asked about one particular matter, and responded: "Is Mr. Dalzell in favor of this improvement?" "He is, Mr. President," replied the spokesman. "Gentlemen," said the President, "I'll say this to you. I would do more for John Dalzell than I would for any other man on the floor of the House." 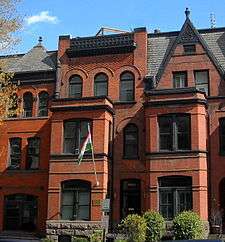 During John Dalzell's political career, his wife Mary Louise was a prominent hostess active in the Washington political scene. Although women did not have the vote at that time, still she was politically influential. To briefly quote a passage describing this from vol 2, p 25 of Kitzmiller's The Family Encyclopedia:

"... his friends persuaded him, somewhat against his will, to go to Congress. In this project they were aided and abetted by his wife .... (who) was exceptionally well-fitted to be the helpmate of a congressman. Relieving her husband of many of the burdens which constituents place upon the representative, she also unobtrusively engineered campaign contracts, quietly supervising that meticulous reelection detail which is the bane of a congressman's existence.... The death of Mrs Dalzell in 1909 broke the mainspring of his political existence."

He retired in Washington, D.C., following the death of his wife in 1909. In 1925, he moved to live in the home of his youngest son, Samuel Dalzell, in Altadena, California. He died in California at the age of 82. He is buried in Pittsburgh's Allegheny Cemetery.