Demographics of Libya include population density, ethnicity, education level, health of the populace, economic status, religious affiliations and other aspects of the Libyan population. No complete population or vital statistics registration exists in Libya. Of the over 6,000,000 Libyans that lived in Libya prior to the Libyan Crisis, more than a million were immigrants. The estimates in this article are from the 2010 Revision of the World Population Prospects which was prepared by the Population Division of the Department of Economic and Social Affairs of the United Nations Secretariat, unless otherwise indicated.[6]

The Libyan population resides in the country of Libya, a territory located on the Mediterranean coast of North Africa, to the west of and adjacent to Egypt. Most Libyans live in Tripoli, the capital of the country.

Over the centuries, Libya has been occupied by the Phoenicians, Greeks, Italians, Arabs and Egyptians. The Phoenicians may have had the biggest impact on Libya as the capital's name, Tripoli, is Phoenician, and also many of the coastal towns and cities were established by them as trade outposts within the southern Mediterranean coast in order to facilitate the Phoenician business activities in the area. Starting in the 8th century BCE, Libya was under the rule of Carthage. In the 7th century CE Libya was conquered by the Arab Muslims as part of the Arab conquest of North Africa. Centuries after that the Ottoman Empire conquered Libya in 1551 and remained in control of its territory until 1911 when the country was conquered by Italy. In the 18th century Libya was used as the base for various pirates.

In the Second World War Libya was one of the main battlegrounds of North Africa. During the war, the territory was under an Anglo-French military government until it was overrun by the Axis Powers, who, in turn, were defeated by the Allies in 1943.

In 1951, the country was granted independence by the United Nations, being governed by King Idris. In 1969, a military coup led by Muammar Gaddafi resulted in the overthrow of King Idris I. Gaddafi then established an anti-Western dictatorship. In 1970, Gaddafi ordered all British and American military bases closed.

The Libyan population has increased rapidly after 1969. They were only 523,176 humans in 1911, 2 million in 1968, and 5 million in 1969. That population growth was due in large part to King Idris and Gaddafi granting citizenship to many Tunisians, Egyptians and other immigrants. Many migrant workers came to Libya since 1969. Among the workers were construction workers and laborers from Tunisia, teachers and laborers from Egypt, teachers from Palestine, and doctors and nurses from Yugoslavia and Bulgaria. 1,000,000 workers, mainly from other neighboring African countries like Sudan, Niger, Chad and Mali, migrated to Libya in the 1990s, after changes were made to Libya's Pan-African policies.[7]

Gaddafi used money from the sale of oil to improve the living conditions of the population and to assist Palestinian guerrillas in their fight against the Israelis. In 1979, Libya fought in Uganda to assist the government of Idi Amin in the Ugandan Civil War, and in 1981, fought in the Libyan-Chadian War. Libya had occupied the Aozou Strip; however, in 1990 the International Court of Justice submitted the case and allowed the full recuperation of territory to Chad.

According to the census conducted in the 2000s, most of the people of Libya are primarily Arab or a mixture of Arab-Berber ethnicities. In addition to this, modern Libyans received large genetic input from other ethnicities like the Phoenicians, Carthaginians, Romans, Greeks, Mamelukes and Ottomans, who had either conquered, settled or conducted trade in ancient Libya before its conquest by the Islamic Empire, followed by the genetic contributions from Arabs from the Arabian Peninsula and indigenous African Berbers. Arab culture was adopted by the ancestors of modern Libyans through submission, cultural and ethnic assimilation/inter-marriage of indigenous Libyans with the incoming Arabs, as in most of northern Africa during the expansion of the Umayyad Caliphate into North Africa. This indicates that most Libyans (North Africans in the general) are more racially linked with the Mediterranean peoples of southern Europe than with the peoples of the Arabian Peninsula.

In September 2008, Italy and Libya signed a memorandum by which Italy would pay $5 billion over the next 20 years to compensate Libya for its dominion over Libya for its reign of 30 years.[8]

Since 2011, the country is swept by Libyan Civil War, which broke out between the Anti-Gaddafi rebels and the Pro-Gaddafi government in 2011, culminating in the death and overthrow of Gaddafi. Nevertheless, even today Libya still continues to generate problems within the area and beyond, greatly affecting its population and the migrant route to Europe. 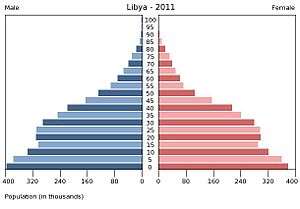 Population pyramid for Libya in 2011.

Libya has a small population residing in a large land area. Population density is about 50 persons per km² (130/sq. mi.) in the two northern regions of Tripolitania and Cyrenaica, but falls to less than one person per km² (2.7/sq. mi.) elsewhere. Ninety percent of the people live in less than 10% of the area, primarily along the coast. About 90%[9] of the population is urban, mostly concentrated in the four largest cities, Tripoli, Benghazi, Misrata and Bayda. Thirty percent of the population is estimated to be under the age of 15, but this proportion has decreased considerably during the past decades.

During the past 60 years the demographic situation of Libya changed considerably. Since the 1950s, life expectancy increased steadily and the infant mortality rates decreased. As the fertility rates remained high until the 1980s (the number of births tripled between 1950–55 and 1980–85), population growth was very high for three decades. However, after 1985 a fast decrease in fertility was observed from over 7 children per woman in the beginning of the 1980s to less than 3 in 2005-2010. Because of this decrease in fertility the population growth slowed down and also the proportion of Libyans under the age of 15 decreased from 47% in 1985 to 30% in 2010.

The following demographic statistics are from the CIA World Factbook, unless otherwise indicated.[13] 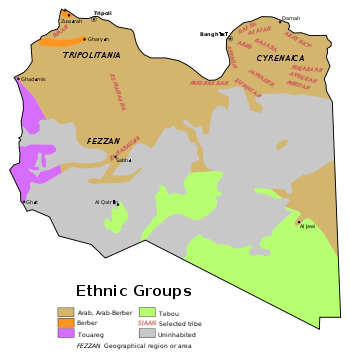 The native population of Libya is primarily Berber [15] or a mixture of Native Libyan ethnicities like Tuareg, Toubou and Berber, there is small minority of Berber-speaking tribal groups concentrated in northwest part of Tripolitania, Tuareg no Toubou tribes can be found in southern Libya, which are nomadic or semi-nomadic. Most of the Libyans claim descent from the Bedouin Arab tribes of the Banu Hilal and the Banu Sulaym, who invaded the Maghreb in the 11th century. There is also some Punic admixture, and a curious traditional element from the Romanized Punics such as the Roman toga can be seen in Tripoli's people and was used by Muammar Gaddafi himself.

In the west of the country, there are some Tuareg nomads, mobile across the Libyan-Algerian border. Tuaregs are also scattered over Algeria, Mali, Niger and Burkina Faso.

In the southeast, there are small populations of the Nilo-Saharan Toubou (Tibbu), although they occupy between a quarter and a third of the country and who also inhabit Niger and Chad.

Among foreign residents, the largest groups are from other African nations, including citizens of other North African nations (primarily Egyptians) as well as sub-Saharan Africans.

Libyan society is to a large extent structured along tribal lines, with more than 20 major tribal groups.[16]

Foreign population is estimated at 3%, mostly migrant workers in the oil industry from Tunisia and Egypt, but also including small numbers of Greeks, Maltese, Italians, Pakistanis, Palestinians, Turks, Indians and people from former Yugoslavia. Due to the Libyan Civil War, most of these migrant workers have returned to their homelands or simply left the country for a different one.

However, according to news accounts in Allafrica.com, and the Libya Herald, between 1 million and 2 million Egyptians are resident in Libya and Sudanese number in the hundreds of thousands. If this is correct, the foreign population could be as high as 30% of the country, as simultaneously at least two million Libyans have fled since the NATO intervention of 2011, toppling the previous Libyan government.

Analysis of Y-chromosome have found three Y-chromosome lineages (E1b1b-M81, J-M267 and E1b1b-M78) at high frequency in Libya like in other North African populations. Some studies suggest a Paleolithic component for E-M81 and E-M78, while other studies point to a Neolithic origin. E1b1b-M78 has probably emerged in Northeastern Africa and is today widely distributed in North Africa, East Africa, and West Asia. E1b1b-M81 show high frequencies in Northwestern Africa and a high prevalence among Berbers (it is sometimes referred to as a genetic "Berber marker"). Its frequency declines towards Egypt and the Levant. On the other hand, E-M78 and E-M123 are frequent in the Levant and Egypt and decline towards Northwest Africa. Another common paternal lineage in Libya and North Africa is haplogroup J through its subtypes J1 (M267) and J2 (M172). J1 is prevalent in all North African and Levantine groups and found at high frequencies in the Arabic peninsula. It has been previously associated with the Islamic expansion. J2 is sporadically detected in North Africa and Iberia and is very frequent in the Levant/Anatolia/Iran region. Its spread in the Mediterranean is believed to have been facilitated by the maritime trading culture of the Phoenicians (1550 BC- 300 BC). E-M2 is the predominant lineage in Western Africa.

Listed here are the human Y-chromosome DNA haplogroups in Libya.[18]

Almost all Libyans are Sunni Muslim. Foreigners contribute very little Christian presence, but there are some local Christian church adherents in Eastern Libya - the Copts. A small Jewish community historically lived in Libya since antiquity (see History of the Jews in Libya), but the entire Jewish community in Libya eventually fled the country for Italy, Israel, or the United States, particularly after anti-Jewish riots in the wake of the 1967 Six-Day War between Arab countries and Israel.

Libyan cuisine is heavily influenced by Mediterranean, North African (Tunisian cuisine) and the Middle Eastern (Egyptian cuisine) traditions. Notable dishes include Shorba Arabiya, or Arabian soup, which is a thick, highly spiced soup.[19] Bazeen is a traditional Libyan food, made from a mix of barley flour and a small amount of plain flour.

Libyan origin instruments are the zokra (a bagpipe), a flute (made of bamboo), the tambourine, the oud (a fretless lute) and the darbuka (a goblet drum held sideways and played with the fingers). Bedouin poet-singers had a great influence on the musical folklore of Libya, particularly the style of huda, the camel driver's song.

The Berber languages is still spoken by some of the Tuareg, a rural group in Libya's south.[20]

Non-Arabic languages had largely been spoken by foreign workers (who had been massively employed in Libya in various infrastructure projects prior to the 2011 civil war), and those languages with more than 10,000 speakers included Punjabi, Urdu, Mandarin, Cantonese, Korean, Sinhala, Bengal, Tamil, Tagalog, French, Italian, Ukrainian, Serbian, and English.