Lilium (members of which are true lilies) is a genus of herbaceous flowering plants growing from bulbs, all with large prominent flowers. Lilies are a group of flowering plants which are important in culture and literature in much of the world. Most species are native to the temperate northern hemisphere, though their range extends into the northern subtropics. Many other plants have "lily" in their common name but are not related to true lilies. 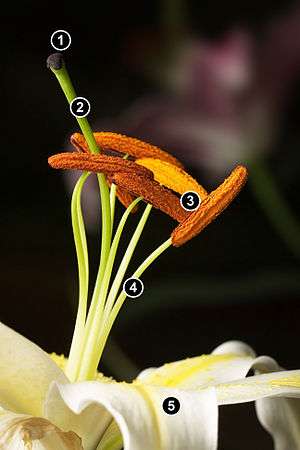 Lilies are tall perennials ranging in height from 2–6 ft (60–180 cm). They form naked or tunicless scaly underground bulbs which are their overwintering organs. In some North American species the base of the bulb develops into rhizomes, on which numerous small bulbs are found. Some species develop stolons. Most bulbs are deeply buried, but a few species form bulbs near the soil surface. Many species form stem-roots. With these, the bulb grows naturally at some depth in the soil, and each year the new stem puts out adventitious roots above the bulb as it emerges from the soil. These roots are in addition to the basal roots that develop at the base of the bulb.

The flowers are large, often fragrant, and come in a range of colours including whites, yellows, oranges, pinks, reds and purples. Markings include spots and brush strokes. The plants are late spring- or summer-flowering. Flowers are borne in racemes or umbels at the tip of the stem, with six tepals spreading or reflexed, to give flowers varying from funnel shape to a "Turk's cap". The tepals are free from each other, and bear a nectary at the base of each flower. The ovary is 'superior', borne above the point of attachment of the anthers. The fruit is a three-celled capsule.[3]

Naturally most cool temperate species are deciduous and dormant in winter in their native environment. But a few species which distribute in hot summer and mild winter area (Lilium candidum, Lilium catesbaei, Lilium longiflorum) lose leaves and remain relatively short dormant in Summer or Autumn, sprout from Autumn to winter, forming dwarf stem bearing a basal rosette of leaves until accept enough chilling requirement, the stem begins to elongate while warming.

The World Checklist of Selected Plant Families, as of January 2014, considers Nomocharis a separate genus in its own right,[12] however some authorities consider Nomocharis to be embedded within Lilium, rather than treat it as a separate genus.[13][14]

There are seven sections:

Some species formerly included within this genus have now been placed in other genera. These genera include Cardiocrinum, Notholirion, Nomocharis and Fritillaria.

The botanic name Lilium is the Latin form and is a Linnaean name. The Latin name is derived from the Greek λείριον, leírion, generally assumed to refer to true, white lilies as exemplified by the Madonna lily.[18][19] The word was borrowed from Coptic (dial. Fayyumic) hleri, from standard hreri, from Demotic hrry, from Egyptian hrṛt "flower". Meillet maintains that both the Egyptian and the Greek word are possible loans from an extinct, substratum language of the Eastern Mediterranean. The Greeks also used the word κρῖνον, krīnon, albeit for non-white lilies.

The term "lily" has in the past been applied to numerous flowering plants, often with only superficial resemblance to the true lily, including water lily, fire lily, lily of the Nile, calla lily, trout lily, kaffir lily, cobra lily, lily of the valley, daylily, ginger lily, Amazon lily, leek lily, Peruvian lily, and others. All English translations of the Bible render the Hebrew shūshan, shōshan, shōshannā as "lily", but the "lily among the thorns" of Song of Solomon, for instance, may be the honeysuckle.[20]

For a list of other species described as lilies, see Lily (disambiguation).

The range of lilies in the Old World extends across much of Europe, across most of Asia to Japan, south to India, and east to Indochina and the Philippines. In the New World they extend from southern Canada through much of the United States. They are commonly adapted to either woodland habitats, often montane, or sometimes to grassland habitats. A few can survive in marshland and epiphytes are known in tropical southeast Asia. In general they prefer moderately acidic or lime-free soils.

Lilies are used as food plants by the larvae of some Lepidoptera species including the Dun-bar.

Many species are widely grown in the garden in temperate and sub-tropical regions. They may also be grown as potted plants. Numerous ornamental hybrids have been developed. They can be used in herbaceous borders, woodland and shrub plantings, and as patio plants. Some lilies, especially Lilium longiflorum, form important cut flower crops. These may be forced for particular markets; for instance, Lilium longiflorum for the Easter trade, when it may be called the Easter lily.

Lilies are usually planted as bulbs in the dormant season. They are best planted in a south-facing (northern hemisphere), slightly sloping aspect, in sun or part shade, at a depth 2½ times the height of the bulb (except Lilium candidum which should be planted at the surface). Most prefer a porous, loamy soil, and good drainage is essential. Most species bloom in July or August (northern hemisphere). The flowering periods of certain lily species begin in late spring, while others bloom in late summer or early autumn.[21] They have contractile roots which pull the plant down to the correct depth, therefore it is better to plant them too shallowly than too deep. A soil pH of around 6.5 is generally safe. The soil should be well-drained, and plants must be kept watered during the growing season. Some plants have strong wiry stems, but those with heavy flower heads may need staking.[22][23]

Below is a list of lily species and cultivars that have gained the Royal Horticultural Society's Award of Garden Merit:[24][25][26]-

Numerous forms, mostly hybrids, are grown for the garden. They vary according to the species and interspecific hybrids that they derived from, and are classified in the following broad groups:[27][28][29]

These are based on Lilium dalhansonii, Lilium hansonii, Lilium martagon, Lilium medeoloides, and Lilium tsingtauense.
The flowers are nodding, Turk's cap style (with the petals strongly recurved).

These are cultivated forms of this species and its subspecies.
They are most important as plants for cut flowers, and are less often grown in the garden than other hybrids.

These are based on hybrids within Lilium section Archelirion,[30][31] specifically Lilium auratum and Lilium speciosum, together with crossbreeds from several species native to Japan, including Lilium nobilissimum, Lilium rubellum, Lilium alexandrae, and Lilium japonicum.
They are fragrant, and the flowers tend to be outward facing. Plants tend to be tall, and the flowers may be quite large. The whole group are sometimes referred to as "stargazers" because many of them appear to look upwards. (For the specific cultivar, see Lilium 'Stargazer'.)

Includes all other garden hybrids.

All natural species and naturally occurring forms are included in this group.

The flowers can be classified by flower aspect and form:[35]

Many newer commercial varieties are developed by using new technologies such as ovary culture and embryo rescue.[36]

Aphids may infest plants. Leatherjackets feed on the roots. Larvae of the Scarlet lily beetle can cause serious damage to the stems and leaves. The scarlet beetle lays its eggs and completes its life cycle only on true lilies (Lilium) and fritillaries (Fritillaria).[37] Oriental, rubrum, tiger and trumpet lilies as well as Oriental trumpets (orienpets) and Turk's cap lilies and native North American Lilium species are all vulnerable, but the beetle prefers some types over others. The beetle could also be having an effect on native Canadian species and some rare and endangered species found in northeastern North America.[38] Daylilies (Hemerocallis, not true lilies) are excluded from this category. Plants can suffer from damage caused by mice, deer and squirrels. Slugs, snails and millipedes attack seedlings, leaves and flowers. Brown spots on damp leaves may signal botrytis (also known as lily disease). Various fungal and viral diseases can cause mottling of leaves and stunting of growth.

Lilies can be propagated in several ways;

According to a study done by Anna Pobudkiewicz and Jadwiga the use of flurprimidol foliar spray helps aid in the limitation of stem elongation in oriental lilies. (1)

Some Lilium species are toxic to cats. This is known to be so especially for Lilium longiflorum though other Lilium and the unrelated Hemerocallis can also cause the same symptoms.[40][41][42][43] The true mechanism of toxicity is undetermined, but it involves damage to the renal tubular epithelium (composing the substance of the kidney and secreting, collecting, and conducting urine), which can cause acute renal failure.[43] Veterinary help should be sought, as a matter of urgency, for any cat that is suspected of eating any part of a lily – including licking pollen that may have brushed onto its coat.[44]

Lilium bulbs are starchy and edible as root vegetables, although bulbs of some species may be very bitter. The non-bitter bulbs of Lilium lancifolium, Lilium pumilum, and especially Lilium brownii (Chinese: 百合; pinyin: bǎihé) and Lilium davidii var. unicolor are grown on a large scale in China as a luxury or health food, and are most often sold in dry form for herb, the fresh form often appears with other vegetables. The dried bulbs are commonly used in the south to flavor soup. Lily flowers are also said to be efficacious in pulmonary affections, and to have tonic properties.[45] Lily flowers and bulbs are eaten especially in the summer, for their perceived ability to reduce internal heat.[46] They may be reconstituted and stir-fried, grated and used to thicken soup, or processed to extract starch. Their texture and taste draw comparisons with the potato, although the individual bulb scales are much smaller. There are also species which are meant to be suitable for culinary and/or herb uses. There are five traditional lily species whose bulbs are certified and classified as "vegetable and non-staple foodstuffs" on the National geographical indication product list of China.[47]

And there are researches about the selection of new varieties of edible lilies from the horticultural cultivars, such as 'Batistero' and 'California' among 15 lilies in Beijing,[51] and 'Prato' and 'Small foreigners' among 13 lilies in Ningbo.[52]

The parts of lilium species which are officially listed as food material are the flower and bulbs of Lilium lancifolium Thunb., Lilium brownii var. viridulum Baker, Lilium pumilum DC., Lilium candidum Loureiro.[56] Most edible lily bulbs which can be purchased in a market are mostly imported from mainland China (only in the scale form, and most marked as 蘭州百合 Lilium davidii var. unicolor) and Japan (whole bulbs, should mostly be Lilium leichtlinii var. maximowiczii). There are already commercially available organic growing and normal growing edible lily bulbs. The varieties are selected by the Taiwanese Department of Agriculture from the Asiatic lily cultivars that are imported from the Netherlands; the seedling bulbs must be imported from the Netherlands every year.[57][58][59]