For other uses of "Nectar", see Nectar (disambiguation). 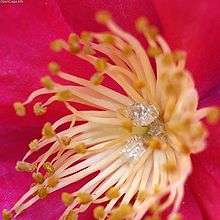 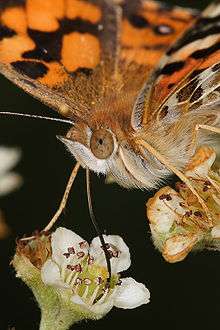 An Australian painted lady feeding on a flower's nectar 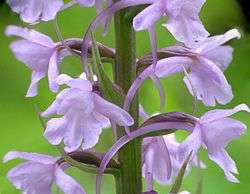 Nectar is a sugar-rich liquid produced by plants in glands called nectaries, either within the flowers with which it attracts pollinating animals, or by extrafloral nectaries, which provide a nutrient source to animal mutualists, which in turn provide antiherbivore protection. Common nectar-consuming pollinators include bees, butterflies and moths, hummingbirds, and bats. Nectar plays an important role in the foraging economics and overall evolution of nectar-eating species; for example, nectar and its properties are responsible for the differential evolution of the African honey bee, A. m. scutellata and the western honey bee.

Nectar is an ecologically important item, the sugar source for honey. It is also useful in agriculture and horticulture because the adult stages of some predatory insects feed on nectar. For example, the social wasp species Apoica flavissima relies on nectar as a primary food source. In turn, these wasps then hunt agricultural pest insects as food for their young. For example, thread-waisted wasps (genus Ammophila) are known for hunting caterpillars that are destructive to crops.

Nectar secretion increases as the flower is visited by pollinators. After pollination, the nectar is frequently reabsorbed into the plant.[1]

Nectar is derived from Greek nektar, the favored drink of the gods. The current meaning, "sweet liquid in flowers," is first recorded in AD 1600.[2]

Floral nectaries are generally located at the base of the perianth, so pollinators are made to brush the flower's reproductive structures, the stamen and pistil, while accessing the nectar.

A septal nectary is nectar-producing tissue that is found in the wall of a plant ovary.[3] Septal nectaries function as a way of attracting pollinators.[4] Plants that rely on insects, birds, or bats for pollination often have septal nectaries. Aside from attracting pollinators, septal nectaries have also been known to attract "plant protectors." Some plants, like Ruellia radicans, have nectaries that continue to secrete pollen even after the petals have been shed. This attracts ants which will in turn protect the developing fruits of the plant from seed predators and herbivores in exchange for nectar.[5]

Extrafloral nectaries (also known as extranuptial nectaries) are nectar-secreting plant glands that develop outside of flowers and are not involved in pollination.[6] They are highly diverse in form, location, size, and mechanism. They have been described in virtually all above-ground plant parts—including leaves (in which case they are known as foliar nectaries), petioles, stipules, cotyledons, fruits, and stems, among others. They range from single-celled trichomes to complex cup-like structures that may or may not be vascularized.[7] 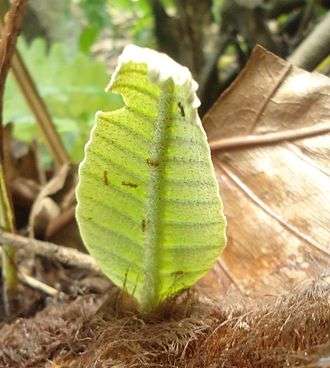 Extrafloral nectaries were originally believed to simply be excretory in nature (hydathodes). Their defensive functions were first recognized by the Italian botanist Federico Delpino in his important monograph Funzione mirmecofila nel regno vegetale (1886). Delpino's study was inspired by a disagreement with Charles Darwin, with whom he corresponded regularly. Darwin believed extrafloral nectaries were simply hydathodes, while Delpino believed they had a defensive function, especially among myrmecophilic plants.[11]

Extrafloral nectaries have been reported in over 3941 species of vascular plants belonging to 745 genera and 108 families, 99.7% of which belong to flowering plants (angiosperms), comprising 1.0 to 1.8% of all known species. They are most common among eudicots, occurring in 3642 species (of 654 genera and 89 families), particularly among rosids which comprise more than half of the known occurrences. The families showing the most recorded occurrences of extrafloral nectaries are Fabaceae, with 1069 species, Passifloraceae, with 438 species, and Malvaceae, with 301 species. The genera with the most recorded occurrences are Passiflora (322 species, Passifloraceae), Inga (294 species, Fabaceae), and Acacia (204 species, Fabaceae).[7] Other genera with extrafloral nectaries include Salix (Salicaceae), Prunus (Rosaceae) and Gossypium (Malvaceae).[9]

Foliar nectaries have also been observed in 39 species of ferns belonging to seven genera and four families of Cyatheales and Polypodiales.[7] They are absent, however, in bryophytes, gymnosperms, early angiosperms, magnoliids, and members of Apiales among the eudicots.[7] Phylogenetic studies and the wide distribution of extrafloral nectaries among vascular plants point to multiple independent evolutionary origins of extrafloral nectaries in at least 457 independent lineages.[7]

Although its main ingredient is natural sugar in a proportion of approximately 55% sucrose, 24% glucose and 21% fructose,[12] nectar is a brew of many chemicals.[13] For example, the Nicotiana attenuata, a tobacco plant native to the US state of Utah, uses several volatile aromas to attract pollinating birds and moths. The strongest such aroma is benzylacetone, but the plant also adds bitter nicotine, which is less aromatic, so may not be detected by the bird until after taking a drink. Researchers speculate the purpose of this addition is to discourage the forager after only a sip, motivating it to visit other plants, therefore maximizing the pollination efficiency gained by the plant for a minimum nectar output.[13][14] Neurotoxins such as aesculin are present in some nectars such as that of the California buckeye.[15] Nectar contains water, carbohydrates, amino acids, ions and numerous other compounds.[1][13]