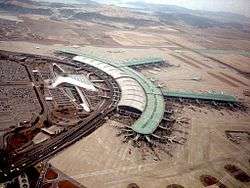 This list of Airport Service Quality Award winners is a representation of the world's airports, which have been recognised by the Airports Council International (ACI) to be leading in customer satisfaction and have thus received an Airport Service Quality Award (ASQ). The ACI gives out the ASQ, based on passenger satisfaction ratings in the ASQ Survey, which is a global survey based on interviews with passengers on the day of travel. Only airports which have participated in all four quarters of the year and followed the sampling methodology of the ACI are eligible for an Award. Along with the World Airport Awards by Skytrax, this award is considered one of the most prestigious accolades in the industry.[1]

This award recognises airports, based on the results for overall satisfaction as rated solely by domestic passengers. The award has been replaced with the "Best Regional Airport" award in 2010.

This award, replacing the "Best Domestic Airport" in 2010, has been classified since 2012 as recognising only airports with 2 million passengers or less.

This award recognizes those airports which have been rated by passengers as having the most courteous and helpful airport, airline and security staff.