"Victoria Airport" redirects here. For other nearby airports, see List of airports in the Victoria area.

Victoria International Airport (IATA: YYJ, ICAO: CYYJ) serves Victoria, British Columbia, Canada. It is 12 nautical miles (22 km; 14 mi) north northwest[2] of the city, in North Saanich, quite close to the town of Sidney on the Saanich Peninsula. The airport is run by the Victoria Airport Authority.

Like most airports that are run by local authorities in Canada, Victoria International Airport charges an Airport Improvement Fee for each outgoing passenger. As of March 2013, it was $10.00.[6]

The airport is classified as an airport of entry by Nav Canada and is staffed by the Canada Border Services Agency (CBSA). CBSA officers at this airport can handle aircraft with no more than 450 passengers, when unloaded from the aircraft in stages, or 120 normally.[2]

There are two popular locations for plane spotters. The first is at the end of Canora Road, on the south-east side of the airport, next to a small cemetery. A second, lesser-known location is an open field off of Mills Road, near the Mills Road and Meadlands Road intersection on the north-east corner of the airport.

The airport started in 1939 as a grass strip, and was used as a military training base.[7] The airport is located beside Patricia Bay, which, due to the prevalence of flying boats at the time, proved to be an excellent location. The Department of Transport took over the airport in 1948. It was then called Victoria (Patricia Bay) Airport, and many locals still refer to it as the "Pat Bay Airport". Trans-Canada Airlines (later Air Canada) began regular service in 1943.

The last Royal Canadian Air Force (RCAF) unit left the airport in 1952. In the late 1980s the RCAF returned to the property when 443 Helicopter Squadron began operating CH-124 Sea King ship-borne anti-submarine helicopters from Victoria International Airport. The RCAF refers to 443 Squadron operations at the airport as the Patricia Bay Heliport.

In 1959, the airport was renamed the "Victoria International Airport".

In 1997, as part of a broad scale restructuring of airports across Canada, Transport Canada (formerly the Department of Transport), gave operational control of the airport to the Victoria Airport Authority.

In 2000, the Victoria Airport Authority began the process of renovating and expanding the terminal to meet passenger needs. In 2002, the new "airside hold room" and the new "arrivals rotunda" were rebuilt. By 2005, the new "departures area" was completed.

In May 2005, the federal government, which owns the land, announced a reduction in the rent paid by the Victoria Airport Authority. This will save $0.6 million Canadian each year and $12 million CAD over the life of the lease, which is 50 years.

The main terminal has nine gates, organized as gates 1–2 and 4–10. Gates 1,2 and 9,10 are equipped with aircraft loading bridges.

There are three luggage carousels: two located at the arrivals area for domestic passengers, and one for international flights located beside the customs area. 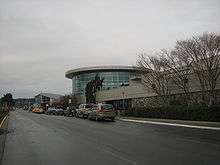 The main facade of the terminal

Nearly all commercial flights at Victoria fly to domestic airports or to destinations in the United States. As of 2015, seasonal scheduled flights by Air Transat, Sunwing Airlines, and WestJet also connect Victoria to tourist destinations in Mexico.

The Victoria Airport Authority's 2008 master plan laid out a timeline of proposed changes to the airport.[11]

There are several organisations that offer flight training at the airport:

Transportation to the airport

It is served by direct shuttle bus service to and from downtown hotels, by taxis (Yellow Cab).

BC Transit routes 83, 86, and 88 make connections to the airport. Passengers using BC Transit can connect with intercity (Greyhound Bus Lines or Vancouver Island Coach) and regional coach service (Pacific Coach Lines) in Victoria.

By car, the airport is normally a 20-minute drive from downtown Victoria (with little or no traffic, and a 40-minute drive with traffic) via Highway 17. The airport has short term and long term/daily parking lots next to the terminal with an additional overflow lot. Rental lot is located to the southwest of the terminal building.

A new interchange at Highway 17 and McTavish Road, the main highway access point to the airport, was completed in April 2011. Funding for the interchange was shared between the federal, provincial governments and the Victoria Airport Authority.[13]

Victoria International Airport Fire and Rescue operates three crash tenders and one support vehicle to deal with emergencies at the airport. The current station (Airport Fire Service and Airport Operations) opened in 2010 to replace the former station dating back to World War II.[14]