List of defunct law enforcement agencies in the United Kingdom

Due to various Parliamentary Acts the numbers of law enforcement agencies in the United Kingdom has varied drastically since the Metropolitan Police Act of 1829 set up the first modern police force in London.

Abolished under the Local Government Act 1888

The Act, which came into force in 1889 passed control of county constabularies to standing joint committees of county councillors and magistrates, and merged smaller borough police forces (where the town had a population of less than 10,000) with the county police.

Abolished under the Defence (Amalgamation of Police Forces) Regulations 1942

NB - Some were re-constituted after the war but then abolished in 1946.

Abolished under the Police Act 1946 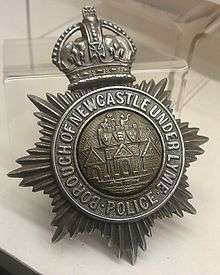 Borough of Newcastle-under-Lyme Police hat badge, in the collection of the Staffordshire County Museum and displayed at the Shire Hall, Stafford

Abolished under the Police Act 1964

Abolished by the Local Government Act 1972

All territorial police forces in England and Wales (except the Metropolitan Police and City of London Police) were abolished and reconstituted at midnight on 31 March 1974/1 April 1974. This list shows the ones that existed then and their fate (ignoring minor transfers).

The partition of Ireland under the terms of the Government of Ireland Act 1920 and the subsequent independence of the Irish Free State in 1922 led to the replacement of the Royal Irish Constabulary with the Garda Síochána (in the Free State, later Éire or Republic of Ireland) and by the Royal Ulster Constabulary (in Northern Ireland). Defunct police forces in Ireland:

Each police burgh had a police force originally, although many merged in the 19th century. The gradual process of amalgamation culminated with the creation of a single Police Service of Scotland in 2013.

Abolished under the Police (Scotland) Act 1946

The Local Government (Scotland) Act 1973 created new police forces based on the new regions and island areas from 16 May 1975.

An Act of the Scottish Parliament, the Police and Fire Reform (Scotland) Act 2012, created a single Police Service of Scotland - better known as Police Scotland - and a single Scottish Fire and Rescue Service with effect from 1 April 2013. (The functions of the British Transport Police, the Civil Nuclear Constabulary and the Ministry of Defence Police within Scotland were not affected).

From the archives of the British Transport Police:

Merged to form the Ministry of Defence Police in 1974.